This has happened to me and some friends when we were playing a Colloseum (scenario).
This issue has already appeared to me a few months ago, so this is not only new to the latest game build. When hosting a Colloseum, civilisations are being picked by the players, and thanks to the latest improvements to the scenario system the game works fine. But after every scenario I’ve played I realise that some of my homecities (including my decks) have been replaced. At first I didn’t really know why this was, but after playing many scenario games I assume it has something to do with the scenarios.
After some trial and error with my friends we found out that i somehow took over their homecities from the civs they had picked in the scenario (and vice versa). For example, I already was around level 30 with my German homecity (and had some good decks in it), one of my friends whose German homecity was just lvl 1, had picked the Germans in the Colloseum, and after the game I had Germans level 1 with his decks myself. → So my assumption is, that somehow the civs being picked in a scenario (haven’t tested if it appears in other scenarios though) are transferred to the other players being part of that game. I can’t say for sure if this problem appeared in 100% of my games, but definitely most of the time, because so far almost every homecity of mine has been replaced by some other at least one time. 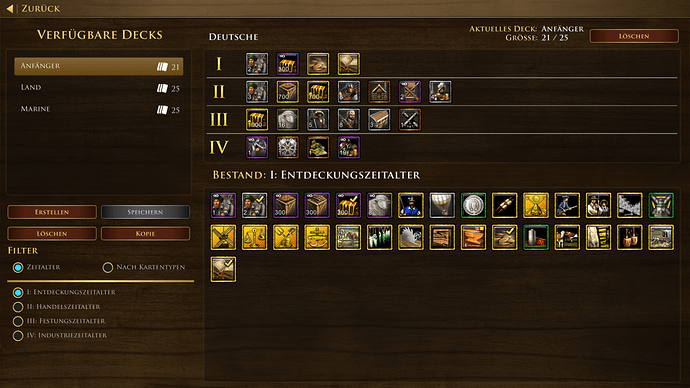 Screenshot 2021-02-07 1707181280×720 941 KB
It’s not really a useful screenshot because I have no pre/after comparison, but this is a homecity of a friend of mine (he didn’t really change anything, is level 1) that now I have. I used to have a homecity above level 30 with some good decks, same happened with other civs.

Would’ve like to upload the scenario we played the most but doesn’t accept the file age3Yscn.

Thanks for reporting this and giving so much detail!

The same issue has been happening to many other players in scenarios too. Here are some additional references:

Please chime in if this has happened to you. I've has this game since it was released. I've only played Britain, Germany, Portugal and Spain. My British Home City level was 81 Yesterday and when i logged in today, the city level dropped down to 18...

hello. I lost all my sets of cards and now it's not mine, the name of the sets is definitely not mine. The level of cities is also not mine. For example, I had 70 lvl of a British city, now 4 lvl. I think it happened after online scenario game. how...

r/aoe3 - I have someone else’s British home city

So I was attempting to play this online match with a friend, and it didn't work. I just wouldn't start after the countdown reached zero. When I went back to the main menu I realized my civilization had been copied from my friend. My decks are now...

Just lost some of my home cities :: Age of Empires III: Definitive Edition...

I just lost India, Germany, France and England. Now they are replaced with some other guys deck and level. What the hell?

Thanks for the reply!
I’ve read through these posts and I can confirm that it might especially happen when there’s a desync,
which still happens sometimes when playing a scenario (still it’s much more stable since the last update).

This issue is currently being tracked by the team. Thanks for the reports!

This bug still exists. This week 3 guys in my clan lost their decks (so annoying). Please fix it.

Had the same problem a couple of times, every now and then some decks are getting replaced by defaults, or switched for different cards. Would be great if the devs could work on that!

To assist in the investigation & resolution of this issue, it would be useful to know which scenarios are being played when the issue occurs. To share them here it may only be possible through an online drive link. If they are publicly available then please provide a link.

I had this issue after playing Act I: Blood’s “A Pirate’s Help” before Hotfix 24632 and it persisted even after replaying the scenario under Hotfix 24632.

When I started the campaign back at the beginning by replaying the first mission in Act I: Blood, all of my cards stuck and I was able to complete Act I without any issue.

So in my case, the issue remained even after Hotfix 24632 when continuing a campaign where I ran into this issue, but when I restarted the campaign from the beginning it went away.

Was playing a colloseum, afterwards all player’s Portuguese HCs were renamed to sth like BringBack20RangeGoons, reset to level 1, and decks shuffled up and destroyed.

@Thunderforge8 I think you might be experiencing I different issue, more similar to this: Home city resets to 0 level after completing the A Pirates’ Help misionn though it sounds like the issue is no longer occurring?

@MadeMantella469 & @Ziper8941
Would you be able to check your local files and let me know what the exact colosseum scenario is called?
inside of C:\Users\[user]\Games\Age of Empires 3 DE\[0]\Scenario you should see a list of all the scenarios you have downloaded like Colosseum World War.age3scn.

Any further info could help

@Thunderforge8 I think you might be experiencing I different issue, more similar to this: Home city resets to 0 level after completing the A Pirates’ Help misionn though it sounds like the issue is no longer occurring?

You’re correct, I was thinking this was a different issue, and it is not occurring any longer after restarting Act I: Blood.

I have not downloaded “Colosseum” or any other custom scenarios, so I am not affected by this issue (although perhaps the two issues are related?)

Hi @CitingPepper233, I’ve added the information from that ESO Community post to our ticket tracking this issue.

Hi, I also recently had like 5 of my home cities replaced by someone else’s, with different decks etc. My Dutch home city has a Korean name, other HC have normal names so I suppose this has happened a few times. This was not the case before this week’s patch I believe, so it is still happening in the current one.