Can someone explain to me how China will be competitive post patch?

I just feel like China’s win rate is already low across all ELO ranks even the lowest in some brackets.

Now they are getting their late game severely nerfed… while their early game is very weak, their knights are weaker than other civs, no charge ability, they dont have a cav ranged unit, castle age they are pretty weak. in 1200 ELO and up they already are the lowest win % team.

Now their late game is nerfed as they are siege heavy, I get it that only siege armys are dumb and we want a compilation of units to be the best for the game play.

But now with no other buffs I feel with out the strong siege support an army the China normal builds with a mix of units arn’t going to be viable.

I feel like the general nerf to siege was already going to hit China hard anyway as its a focus for them, now with the extra nerf to not being able to put a IO on the Clocktower, their siege is basically the same as everyone else but you might have 2-3 clocktower units in a fight its not really much of an edge… but you get extra range vs them getting extra 20% damage.

So my question is how does China not end up being completely useless as a civ now that every other civ is just better than in each area?

I don’t know if you have given the same importance to the Abbasid, or if it is just your fanaticism for your Chinese “main”, therefore your opinions are biased.

Abbsid win rate is much higher than China already.

It’s only super high Elo 1500 and up that Abbsid really drop off as pro level players can exploit the early game weakness alot better than lower Elo players IMO.

But just saying Abbasid are bad worse so who cares if China becomes unplayable is a terrible argument.

So to make Abbasid not the worst civ (even tho win rate shows they arn’t…) you solution is to make China terrible? that makes sense…

you put the image at your convenience, do you think I don’t know how to use the page? according to the global ranking you should also worry about the Holy Roman Empire 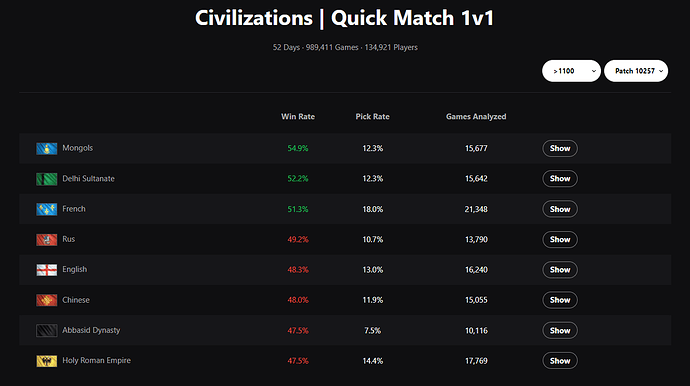 Yes HRE very weak early game which needs to be balanced as well. but they are not getting nerfed super hard on this patch.

i hope china becomes bottom tier, the bombard spam alone gave me this opinion, that and grenadiers, civ is just an annoyance and deserves no place in my opinion…but that is just me.

They also havn’t nerfed Mongols which consistently has been the most OP civ the entire time the games been running.

yeh but do you know how long it takes to get Grenadiers up? you have to build 2 age 4 landmarks just to get them so thats a 2400 Food 1200 Gold upgrade… just to be able to build the unit.

and Grenadiers die very fast to 1-2 mango shots they wipe fast and are very expensive units.

So in your opinion they should be super expensive and weak that does no damage? why would anyone bother going for that unit then?

Expensive units that require the biggest resource upgrade should be strong…

so backed by 5+ bombards makes getting a shot on the grenadiers very hard not to mention, the Civ bonuses china gets more than makes up the economy for the cost of units.

They are weak? Seriously?

yeh but it still takes even an experienced player 22-24 mins to get Grenadiers up.

And they move super slow try running across the map with them RIP.

The Chinese 20% is like, well, magically out of nowhere.

So you want the civ to have zero bonuses?
French get 33% bonus from trading so do Abbasid.
French also get a landmark that just produces any resource they want up to 120 every 20 seconds on Gold thats pretty strong.

Every civ has landmarks or an upgrade / edge for economy boost.

yeah this is true, but hopefully it forces people to try newer earlier game strategies rather than rushing to imperial and leaving them selves weak along the way, maybe now we might see some early aggression from china, its might even make their gameplay more fun.

I am claiming the Chinese is not WEAK.
Adapt and change your siege tanks spam invinicible crap, you are totally fine.

But what early game strats does China have? all their units are weaker than other civs apart from siege from the clock tower.
Zhug Nu are strong vs un-armored units but vs knights or MAA they basically can’t do anything so age 2 they can’t really compete.
Age 3 their knights dont have a charge so are the weakest of all knights/lancers.
Which is why China players rush to imperial as if your gonna fightin in age 2 play english or french.

clearly they are though just look at the win rates, even though you think their seige is so OP it ruins the game they still have one of the lowest win rates so data dosn’t support.

I agree only siege armies are dumb and composition of units should be how the game is played but each civ still needs to have a strength, and just having an IO who gets 20% extra resources isn’t enough IMO. 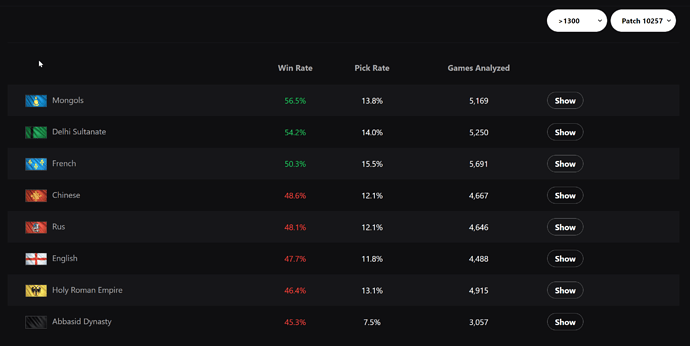