How to stop the AI from resigning?

I found a no ai resign mod here on the mods page. I will try that. Thanks.

I can confirm it works well. Just select the Ai no resign v2 in the game setup for Ai player. On a fortress map and blasted down to zero. Ai king ran to his last tower. I maxed out all my research, built a town center in place of his old one to spite him (heehee) and then executed him by Genoese Crossbow squad. Also, he plead not to attack him because he was weak. Hadn’t seen that in a while. Also used the 104 code so that didn’t cancel anything either.

Hmm, I tried it a couple times with Byzantines and Spanish as AI. They seem a little too defensive after the first UU rush in castle. I usually go for relics and defend them as well as wall in. After the initial rush I try a castle drop and age up more slowly (including relic hunts and posting guards). I could see Cataphracts and Conquistadors standing ground at a distance but not attacking. I’m playing Italians both times and Really steam rolled the ai after the drop. It was more challenging before on stock AI but of course had the stupid resign bug even with 104 code. Was there an update this week? My PC took forever to boot after hanging up badly with 75 pop game (v spanish)

Glad to hear you found a ‘no resign’ mod and it works! Too bad if it alters the difficulty/abilities of the AI, though. If it makes them too easy, maybe try using the handicap feature in the lobby to artificially inflate their abilities? (I.e., Gives them quicker collection, research, build, etc. rates and stronger military, as I recall?)

Was there an update this week? My PC took forever to boot after hanging up badly with 75 pop game (v spanish)

Yeah, I see on Steam a 50MB update today for me on Steam. You probably already know this, but on Jan 31st, there was also a big patch. I had to go to Steam to find a link to this, as I don’t think the forum here was updated with a link to it: 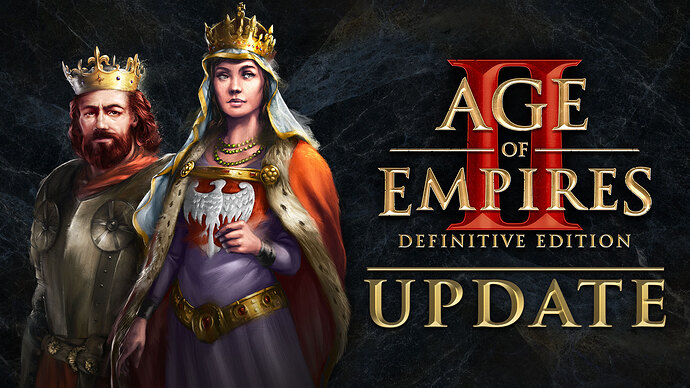 Come jump into to another fun-filled release with exciting updates, balance changes, and bug fixes for Age of Empires II: Definitive Edition!

I tried checking News & Announcements and other similar places in the forum, but don’t see a link to it like there normally is

Hey thanks Darkness,
I had a betted game on a coastal map vs Barbers and I forgot to type 104 or select the ai no resign at game setup. Went ok and had only the tc left when it resigned.

Played yesterday with CD ai and 75 pop. Byz v Italy. Ai rushed me with navy so I was hamstrung for a while. I did get more of the relics and fortified my harbor. Then a long slow battle of attrition with his mass of 23 Pikeman and Genoese crossbowman. With Greek Fire and imperial docks, I crushed his navy pretty quickly. Genoa was strong, but not as strong as Venice.

104 Not working =(
A few weeks ago used to work just fine, now, even i send 104 to everyone or to enemies, they are still resingin =(
Any idea, patch or fix?
Thanks!

Did you do 104 via the specialized AI commands area? If not, you might give that a try:

How to stop the AI from resigning? II - Discussion

You shouldn’t, technically, need to do that… but just thought I’d mention in case it happens to work

Yes I did, and made sure of it last night. Man o man, I had a game of Byz v Mongols on a Ma-something map , berries in the middle. On HD AI. A good bit more difficult than stock or no resign ai. Dudes, the game went for 3:40! I regularly faced armies of 6 to 7 Mangudai and 12+ pikeman against a balanced Byz army of cats, halbs, arbs monks and trebs. Some trebs rams and onagers until i knocked out his remote lumber camps. Got 3 of 5 relics but even after getting his 2, it still took forever. HD ai loves to spam. Whas a real drag but resigned late even with 104 code to ai. No resign AI is a bit weak and Stock current DE version has resign bug. All on Hard level, last man standing, regicide. And 50 pop! 4 player map on slow.

Ai still resigned with 104 to AI but it was late with market, lumber, all mil but archery destroyed. A few vils and a remote mining camp. Gave the typical my villagers wouldn’t or some trash. Seriously after an AI Spam war, we players deserve a total complete, nuclear winter victory option. I mean seriously AI Spam!

Oh and this still means “Regicide” is not regicide so why is it an option?

No resign Ai is too passive. Not aggressive except with trash units and some others. it holds back cavalry and stuff, you can see them. Regular AI still resigns after 104 code in regicide last man standing. It seems to happen after losing last relic, archery ranges, monastery and castle. You used to be able to raze everything then kill the king. Now it resigns despite code and regicide setting.

So I just played the AI no resign mod as Byzantines(me) v Italians on a continental map. I have turned the level up to hardest to get some decent fight out of the ai mod. I get siege spammed like 4 times at least before i was able to turn the tide, and age up to imperial. So I castle forward and build a second fortified harbor only to lose it and its castle to another spam fest. Catch back up and then start to press forward. I get over the hump and start bombarding him back from the shore with my elite galleons. Smash his town center and the king pops out. I’m playing regicide. I pull back the galleons but don’t set them to no attack. Big mistake, one of them goes rogue and kills him when i wasn’t looking! Arrrgh! I mean 2.5 hours trying not to have a heart attack from ai spam only to miss my no resign finish by eliminating his ability to spam with castle, first, then stables. He had built another stable too far from shore so he spammed hussars till the bitter end. no resign works but MAN, don’t forget to turn your units to no attack, otherwise you can defeat the whole purpose! I had to rebuild 2 castles , and 2 town centers during this game and ARRRGH! I botched it with like 20 some ai villagers left, a spam stable and a couple lumber camps, plus his useless arch ranges and barracks. Dang it was a tough map with one shallows and a center peninsula with long border coasts at the edge of the square. Crap. But at least my desperate cheat codes didn’t work and cancel my experience points. Whew, MS messing with the don’t resign code was not cool. Now we get jipped of a satisfying victory after all those spam fests. i gotta remember to set to no attack now.

On the surface, it seems like 104 would be such an easy thing to fix/implement.

A simple if/then/else statement in the code: “If 104, then disable resign, else allow resign.”

But if it is still happening, then I guess it’s not so easy

This does NOT work for me. Playing a 1 v 1 a moment ago, the AI resigned with 2 town centres, 15 villagers, 3 archery ranges, 2 barracks and 14 houses.

It appears that this behavior regressed and we are currently tracking the issue.
Thank you for the reports.

Thanks! Please consider adding a confirmation in chat that the AIs heard our 104 pleas, as it would be helpful, if possible, too. Otherwise, it just feels like you hit 104 and it goes into the void. You wait until end of game to find out if they actually received the message/worked. (I gave an idea on this long ago in one of the threads, and can try to find it, if it’d help.)

I’m curious, should 104 work even if you are just targeting chats to your Allies, or do you need to enable chats to ‘Everyone’ or ‘Enemies’ before doing it? Also, should it work from the normal in-game chat box, or do you have to hit the trumpet icon, choose AI Commands, and do it from there? It’s never been clear to me. Obviously, best case scenario would be to have it work without having to specify ‘Everyone’ and without going into AI Commands. But if no changes are made to ‘how’ to do it, I just want to know how devs designed it to work… i.e., what should make it work 100% of the time

EDIT #1: Based on your post long ago, it seems at least transmitting to ‘Everyone’ may be needed. But it’d be awesome to know if this is still the case; and if using “AI Commands” area is truly a requirement, too.

Thank you for the feedback, we are looking into it. For the AI command did you make sure that you were sending it to enemies too (you can check in the extended chat window with the AI command list)? By default it may not do that in teamgames.

EDIT #2: And I found my idea where after doing 104 the player would receive confirmation chats to show which AI (i.e., all of them, unless player specifies otherwise) have received the message to not resign. (And if 105 is used, it shows confirmation which AI can resign again.) This way, it gives confirmation (albeit, superficially, until the bug is fixed) that our 104/105 chats didn’t go into a void.

In the meantime, I find the original CD AI works well enough. In fact, On Nile Delta, Bohemians (me) v Turks, the AI totally froze because there was not enough room to build a TC among the trees. Or that’s what I thought. I explored the whole map, aged up and then converted all his villagers when I was ready. No resign.

The latest patch (came out today) says taunt “104” got fixed:

I still don’t know if we need to go into AI Commands or not, or if you have to specify the chat audience as “Everyone/Enemies” or not… but unless and until we hear otherwise, I think we shouldn’t do that. Just type “104” in basic chat. If it works, that’s awesome! If it doesn’t, the bug still exists, imo.

If anyone tries it, please report back here with your findings

PS: I bet many players don’t know what “taunt 104” is. The patch note could probably be clarified to say, “AI players now properly respect taunt 104 again, which prevents AI from resigning” (or similar wording)

Thanks Darkness. I will try that tonight or ASAP. On another point, I notice that the CD AI will build walls while DE AI will not at Hard level. Had a nice Portuguese v Chinese last night on a continental map. Challenging and the walls add an extra step to siege.

The DE and HD AIs are a little harder to beat than original CD AI, but DE’s AI at least doesn’t cheat, and can be pretty crafty with sending villys to other parts of the map, and also countering your military units. Also DE’s even sends villagers to repair its trebs during battles.

For variety and to not have games be too easy or too hard, I like to make one AI be DE, and the rest be original AI…when doing vs. multiple AI.

Yes, wall creation is nice when AI do it. Am sad DE’s AI doesn’t do it