How to use Burmese vs Teutons?

Another potentially bad match up (especially imperial age) for the Burmese on maps like hideout where the teutons can’t be raided easily.

Burmese have awesome halbs vs the teuton paladin, but the TK has a purpose here and en masse is very difficult for burma to counter. With arguably some of the worst archers(usual counter to TK) , arambai has short range, lacks the accuracy to focus down TKs(especially in staggered formation) and is paper vs skirms. Or even then the teutons can use rams filled with halbs and TK.

Would eles possibly be the answer?

Both of them have bad Archers, but Burmese do have Arambai, which are decent at sniping the slower Teuton Paladins, and do beat TKs comfortably.

BEs do murder Teuton Infantry, but they are not so cost-effective against their Halbs and Paladins.

I would go for a mix of Halb + BE + Arambai as Burmese, against Teutons.

Do not go for Monks, though.

Heavy Scorpions with SE might also be a good bet with Burmese, since Teutons are slow.

teutons don’t have siege ram, so I guess thats not a concern. I think Burmese xbows aren’t that bad either, sure they lack thumb ring and armor but they still get bracer. Arambai should also perform good enough against TK, especially enmasse since their projectiles will hit someone. I guess just attack faster before it escalates to TKs and siege and the Teuton player secures his base from mobility

BEs do murder Teuton Infantry, but they are not so cost-effective against their Halbs and Paladins.

BEs would be terrible, TKs should beat them cost effectively. Scorpions would be bad too as Teutons have good siege themselves

You Fast Castle and drop 2 castles insantly in closed maps and create Arambais. If you have ~20 with Bloodlines and Armor you can destroy Stone Walls and and Town Centers.

This is probably the easiest strategy in the whole game

BEs would be terrible, TKs should beat them cost effectively. Scorpions would be bad too as Teutons have good siege themselves

Arambai should also perform good enough against TK, especially enmasse since their projectiles will hit someone

the opponents usually stagger them or break them up piece meal, then the arambai loses effectiveness… especially since you can have 1.5 TK for every arambai… (goldwise) and as i was saying they can use rams, since if you send anything to kill the rams, the TK will climb out and flatten them

BUT i have run some tests, and unbelievably at a 2:1 ratio (due to the gold difference) burmese champs beat TK…and the larger the numbers the more the champs win (due to the pathing issues and the way that faster units snowball due to assisting comrades)

You Fast Castle and drop 2 castles insantly in closed maps and create Arambais. If you have ~20 with Bloodlines and Armor you can destroy Stone Walls and and Town Centers.

almost every player ive faced or played with when burmese are involved have made skirms, who rek arambai, and what has the opponent created with their equavelent of 1300 stone, 1500 wood and 1200 gold… 50 skirms? and what else?

BEs would be terrible, TKs should beat them cost effectively.

They do not, because the Trample damage starts kicking in with a vengeance.

1v1 they nearly win vs EBE, in groups how do we compare prices? but even if we go 1:1 EBE to TK, the teuton can easily throw in just a few halbs and swing the balance massively

I was gonna type a lot but then I remembered that Elite battle Elephants now only have 14 attack with DE, so I ran a test on scenario editor. Even with Howdah, the Elephant barely won with 16 HP against a single TK.
TK has 13 armor, so it just takes 5 damage from the Elephant while the Elephant takes 16, the battle Elephant also doesn’t have the overwhelming HP advantage of EWE, its just 3x that of TK

and just to be clear on what ive seen a number of times from teutons and it seems to usually work in imperial:

bbc rek any burmese siege, skirms rek arambai with their greater range, and TK rek everythign else including buildings

no it doesn’t, such engagements are terrible anyway for Elephants who rely on killing fast and retaining as much HP. TKs are also reinforced pretty fast and cost almost half.
Also AFAIK, Elephant trample doesn’t ignore armor, so their trample would be like 2 or 3 (half of normal) damage to adjacent units

Teutons would do well to use the Healing Fortress formation and effectively use their units and monks in such a way that swarms of champions will never break them, and elephants will have a hard time doing much damage before dying/being converted - as for the arambai, a few siege onager shots/castle cover fire goes a long way.

I am looking for the future successors of this formation’s usage, come forth and enjoy yourselves - feel free to ask me any questions In the scenario editor create a group of 29 Teutonic Knights, 21 Hand Canoneers, and 10 monks- put this group of 60 as htky group 1- square formation, stand ground. On the enemy side place 120 paladins of any faction. After testing this, message me here and we’ll talk about ways to add onto the Teutonic Healing Fortress’ entourage and talk tactics. Basic Supp… 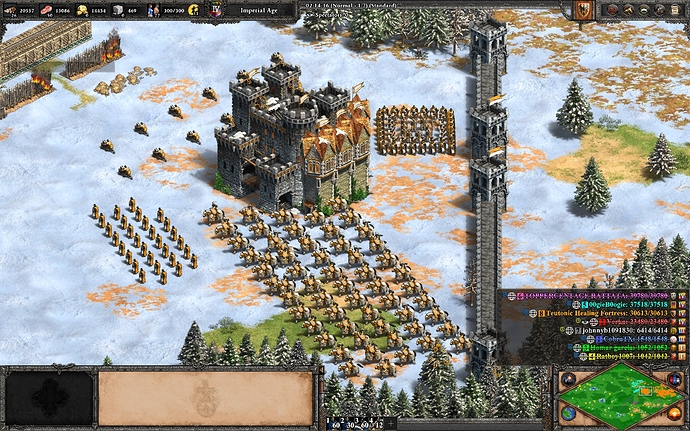 Steam Community :: Guide :: The Art Of The Teutons' Healing Fortress

The Composition, Formation and Battle tactics of a Teutonic King...

If memory serves, I find that the Arambai works as a rush unit to break down the walls of the Teutons, best thing you can do is to attempt to kill the Teuton player before they can mass their proper army.