I don't care about siege not having little men around

You’re right about that, I’ll correct it.

I don’t really get why the reason matters, or why people have to invent reasons that are pretty much guaranteed to be inaccurate (wild guesses tend to be).

If people dislike there not being physical siege operators, then that’s all that matters. That’s important enough. It’s up to the devs to weight that against their decision that they made in the first place. This topic has been raging since the game came out - it’s obviously important to a bunch of players.

Personally, I think it was an aesthetic choice to reduce confusion (can operators be killed, etc) and ensure an accurate physics footprint. Doesn’t matter though, I could just as easily be wrong. I have no idea why the devs did what they did. I’m just voicing an opinion to pre-empt the usual criticism that I don’t have an opinion and argue for the sake of it, or that I’m against it “for the sake of it”

Literally even aoe2 had siege operators in some artillery units and it’s a game from 20 years ago. The playability excuse is just an easy way out for the game’s White Knights.

Iirc only Bombard Cannons and Houfnice have operators in AoE 2 (Organ Guns as well). Mangonels, Rams, Siege Towers and Scorpions all move by themself.

I personally can see Gorb’s point as a reason here to leave out siege operators in AoE 4:

Personally, I think it was an aesthetic choice to reduce confusion (can operators be killed, etc)

Because as you know - in Total War or Stronghold, operators can be killed so people coming from other series to Age won’t be too confused about this.

I am not the guy who most cares artillery without operators, there are other isues in game that I care more. But the excuse of playability have no sense in this case.

This game was made by Relic, who also makes Company of Heroes. Imagine CoH with MG positions and anti-tank guns with no crews. That would bother me a lot! However, since 1997, Age of Empires, siege came without a crew. Sure it was probably a limitation of the time, but over the years I’ve gotten used to AoE having uncrewed siege weapons. I believe it was Relic’s intention to leave siege uncrewed since it has become a part of what makes an AoE game an Age of Empires game. I do not really believe it has anything to do with whether, if they had a crew, they could be killed separately or not, as anyone playing will instantly realise that when the weapon dies the crew dies also. So I think it was more just a visual/ nostalgia choice. Maybe even a unit size choice. Having little men meaning a siege weapon compared to my “normal” sized army would bother me more compared to just leaving out the crew.

Which half? Leave ram out since that could both be crewed or not crewed. Balista (The big moving crossbow), Trebuchet, and Catapult were all not crewed from what I remember. Same goes for AoE1. THe exception would be AoE3 then.

I think 2D graphics and units facing left being the flipped version of units facing right are what make an AOE an AOE game.

Well, from a certain point of view, you’re actually not wrong. It depends on what your personal preference is and what you consider a true Age game to be. For example, If you think Age1 was great for its time, and Age2 is the best. Age3 is bad, and Age4 could have been better. But since we just joking around now, I think the explanation for siege crews lies in history. All RTS games in modern times, going back to the 1500s more or less, have crews for siege weapons. RTS games going back to the middle ages and back doesn’t. It’s because they were driven by magic, and magic has been lost around the time the Renaissance era hit.

All the cannons do and enclosed ones like Rams and Hussite wagons are ambiguous.

I think it’s similar to the 2D graphics and sprite thing. It’s a combined effect of a lot of historical factors. Older games take much smaller space. It was also too difficult to make very complicated animations back then. And “medieval fantasy” was among the safest genres at that time. So the developers in 1990s designed art styles that make the medieval siege engines look good enough when unmanned, which kinda founds a “tradition” that lasts into early 3D RTS.
Then there were >10 years without major RTS releases. Quite a few ancient or medieval games had crews though but were rarely known.

I feel that the proportion of those unmanned siege models are still intentionally tweaked from reality to justify their designs. Also they were huge standalone wooden “buildings” on their own built by whatever wood is available near the battlefield so they do not look stupid when unmanned.

When it comes to cannons however, their designs in reality are very well optimized for the crew to push and handle. And we are more familiar with them (most of us have seen people manning a WW1 or 2 field gun whose overall outlines are similar to 18-19 century ones). So they look odd when running by themselves, maybe except early bombards which are supported by improvised wooden frames.

As AOE4 has more specialized gunpowder units than AOE2, I think at least the culverin and ribauld need to be manned.

All the cannons do and enclosed ones like Rams and Hussite wagons are ambiguous.

So then one could argue that no siege units in AoE2 are manned. It was only AoE3 that had weapon crews.

I would argue either have all siege manned or non. Rise of Nations had manned Trebuchets, they managed to accomplish it. Granted, by only 2 men, but it worked. Either way, manned or not, since it’s an Age of Empires game, and I played since 1998, I give it a pass.

Ya, that little cannon always confused me. It is meant to be a much bigger cannon, pushed by multiple people or I guess horses, but they intentionally made it so small so it can be pushed by a single person. I never really understood that design choice. It initially made me feel that it is like a mortar more than siege since it actually has a unit manning it. But like @ArrivedLeader22 said, it could be because a cannon resembles modern artillery too much, and we are too used to seeing such weapons manned, compared to never seeing medieval siege weapons in real life.

Yes I know about Rise of Nations. My point is it is easier for medieval siege engines especially the trebuchet to get away with not having crews, but less so with cannons.
That’s why AOE2 bombard cannon (a really odd name and design BTW) need to be manned, or it will look very imbalanced and stupid if running by itself: 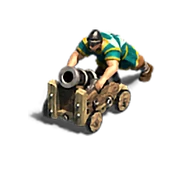 There indeed are some intentional design tweaks to make the siege engine less odd when unmanned. These are my guesses:
1. Making the structure more balanced. This especially applies to ballista-type engines. Most of them are very unrealistic and disproportional in AOE games. If being more realistic they will be a large crossbow placed on a base and look very odd if unmanned. 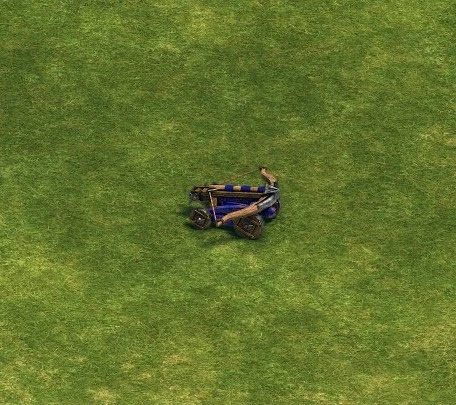 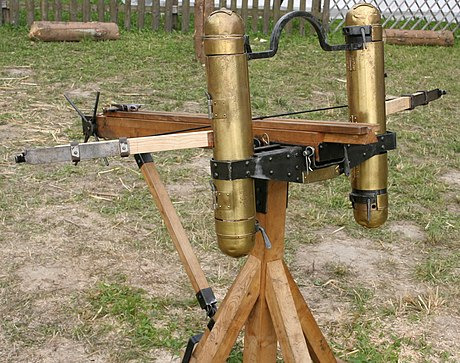 So I think the AOM one looks a little worse than others:

But if you have a design like this (also in AOM), it has to be pushed by someone:

Cannons overall are narrower structures and people are more familiar with them. It is hard to put a big square carriage beneath them so they can justifiably run by themselves.

2. Avoiding large wheels. A huge rotating wheel gives people a stronger sense that the thing is a running human construct (which should be manned). Luckily most pre-modern siege engines do not have large wheels, but again cannons do.

Back in 2000s Empire Earth 1 (also a 3D game) had unmanned cannons but I feel it does not really look good. The model just screams “get manned” to me.

Another reason (I guess) is, if they adopt the “realistic” design of early bombards, which are also huge structures that need to be packed an unpacked, it is basically another trebuchet. So they choose to make a more portable and mobile alternative version of trebuchet and we get this strange small “bombard cannon”.

Thanks for the very detailed reply! I almost forgot about Empire Earth cannons! Yes, they looked really odd moving around by themselves. More so compared to whatever AoE does. At least in AoE4, all the stuff gets packed up into wagons, so it actually looks a bit better moving by itself, and when it’s unpacked, it’s fine, for the reasons you said. Although AoE4 packed siege does remind me, I guess in my subconscious, of vehicles. Since they look self-driven. But the alternative to that would have been horses appearing out of nowhere to pull them. Or take the Rise of Nations route, and have a horse pull it, with or without two guys following, and the horse just walks to the side as it unpacks. Sorry, I must praise RoN for that, they really tried to add details like that back in 2003.