I want to remind the devs and Microsoft

You can’t just stay quiet about this game and wait for it to die to dodge spending resources to fix it because this game will not die. The game has survived since 1997 without much support until DE which brought support for a few months but was later abandoned. Since the devs are always so eager to say that they are reading the posts in the forums, can they show the common courtesy of at least saying something about AoE1? This is getting very stupidly annoying, a very small team could work wonders for this game but for some reason it does not get it?

There are already countless threads about suggestions and bug fixes, while bug posts for other games almost always get a reply for other games in the franchise there is nothing except for silence here…

I’m right there with you. But we’ve been mocking this for what feels like an eternity, sometimes with the same sentences. They simply don’t care.
In the meantime, I also doubt that any dev is reading along here. Because anyone with a little heart and empathy, who would get what’s going on, would write something.

Only thing what would work, if we could some how boycott AoE4 untill they fix AoE1DE. But thats impossible so there is nothing else to do than beg and hope, which seems doesn’t work since they don’t read or they don’t care about it. So what is left is most likely if AoE4 will be success then they might make AoE5 in same time period as Age of Empires 1.

Or if some talented person that cares about this game could fix, improve and mod game to better.

I play AoE II and AoE IV too but I keep coming back to AoE I. It has that simplicity that I love. I really wish the developers would listen more to the players and improve the game that made all of the other games possible. While it could use some updating, it hits the sweet spot for me between complexity and playability. I also find the ancient theme more interesting.

what is left on the cheap side of things to add to the game?
bug fixes, maybe some of the pathfinding
but I wouldnt expect new civs unless the game get some attention by people and start getting some competitive scene that get microsoft attention.

AoEDE to me seems like the test subject to see how the DE concept will work, before going for AoE2DE, the one they really wanted to make because is the most popular one

For example, you could introduce special technologies for each civ to highlight the uniqueness of each civ.
Or you could fix the pathfinding and the glitch animations.
All things that have been suggested many times before. As for the technologies, suggestions have even been made for each civ.

I wouldnt expect new civs unless the game get some attention by people and start getting some competitive scene that get microsoft attention.

How is that going to happen without crucial updates to the game coming out and being announced/marketed accordingly?
I know several people who say that the game has a lot of potential, but the mechanics and possibilities are just too antiquated.

I agree with nostrodomos here, how can a competitive scene grow without any support? Even if they won’t add new civs, they can at least fix some bugs and do some balancing for the civs and campaigns… Also it is much easier to make new campaigns for this game when compared to other age games as there are less triggers and a single voiceline is used either way so making a new expansion would not be an expensive endeavor

image883×836 57 KB
There is also this, I don’t understand what Microsoft thinks but it doesn’t make any sense to me to tell people in April to continue sharing your ideas for the game and that they will be considered just for them to say the game is no longer supported like that now.
6 Likes
Can't publish mod
Albertha94 November 29, 2021, 7:27pm #8

Did you get a reply from that?
I bet no.

It hurts to read! I don’t like this at all.

Speaking of Reddit, here’s something fitting for this discussion: 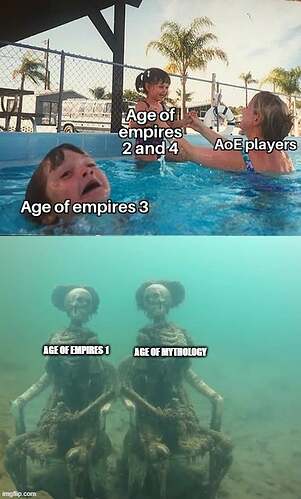 I agree with you, if everyone that thinks the game is dead and decides not to post due to that actually posted, then microsoft would be obliged to give more support otherwise it would look quite bad on them. We have to take the initiative otherwise they will just ignore the game

I’m with you 100 percent on that. I’ve also come to that conclusion for a while now and have posted things on different platforms from time to time. But there weren’t many and unfortunately I don’t have the time or the talent to do it efficiently on a large scale.

I hope they allow FE to hire a few people to deal with this game.
All DE are successful. Aoe 4 is doing fine.
Aoe 1 deserves a fresh air, anything new would be dungeon shaker. I know if it was FE will, they would do more for the game but the superiors want them focused on another games.

Maybe they don’t see potential any further to this game but after Aoe Online, Aoe 5 should be Ancient era.

It’s so easy to craft 4 final civs and campaigns

thank god you are not part of the balancing team

This is not Aoe2 so Paladin HP is totally irrelevant. Unit balance in here is different.

I know this isn’t AoE2 and just because unit balance is different in AoE1, that’s still no excuse for the Cataphract to have more than 200 HP. The amount of HP it has right now is still too much and it needs to be reverted to either 180 or 200 HP. Right now, AoE1 is unbalanced compared to AoE2 which happens to be more balanced.

I normally just get accustomed to gameplay and don’t complain about balance unless it’s too obvious. We could discuss centurions, armored elephants and cataphracts are all OP, but they get easily destroyed by helepolises, safely from the distance (although cataphtacts are way harder to kill).

If you use the wrong units/strategies, sure… they will be OP.

For me, helepolis and elephants are pretty unbalanced.

Romans probably need to be nerfed in that aspect, yes, since they have swordsmen till legions, scythed chariots, good priests AND helepolises with Engineering technology.

Up to the Bronze Age, maybe I agree with you. They have (almost) all technologies and units with economic advantages (cheap buildings), strongest barrack units and super-cheap towers.
The strongest nation until then. But in the Iron Age they get some problems: bad cavalry, miserable archers, useless towers.
In the endgame, the huge attack potential is of course their shining point, but as soon as they have to defend, it gets difficult.