Can’t pass the benchmark score with a high-end pc to play ranked maches, and no games currently available in the lobby browser or even servers in my region.

Once again, Microsoft has pushed a game out way before it was finished. I guess we’ll see you guys in a year, when you finally get finished fixing all the problems that should of been handled in beta, and lose the majority of your player base, just like the original Definitive Edition.

This is frustrating. Beta testers warned the dev team in the forums to delay the release, one of the most popular forum topics that was discussed. Yet here we are. Can’t get enough of that almighty dollar it seems.

The fact that not a single developer from the team has gotten in front of a camera and recorded a video, reaching out to their loyal & dedicated community to discuss the performance issues and what is being done on their end is really what bothers me the most. Borderline cowardly.

If you were more transparent about your approach to handling these issues, and why its such a difficult problem to fix, I think people would be more understanding. But all we get is paid streamers showcasing a game that far depicts the real experience for majority of your players.

This is a clear money grab to keep fans interested in the franchise and fit perfectly into the timeline with the release of Age of Empires IV. 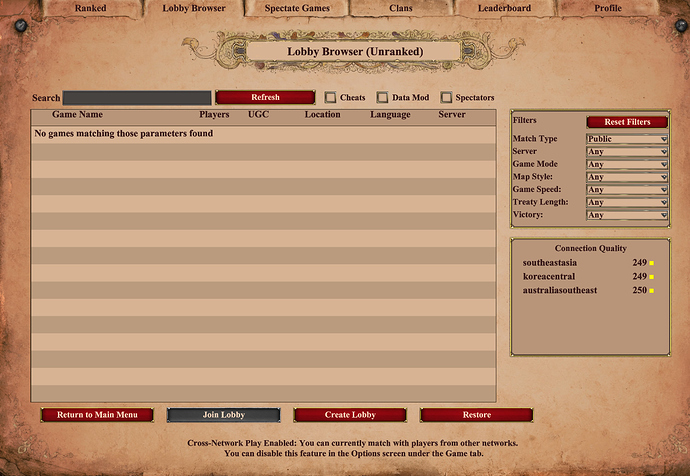 Servers are down. It’s pretty disappointing.

Thank you very much for your patience! Multiplayer issues have been resolved and games should be available to play.

Still doesn’t address the issue as to why a $3000+ PC can’t play a remaster cant pass a benchmark test for a 90’s game. Are there plans to fix that as well?

Dell Workstation is a no name brand? Shouldn’t take more than 2gb of video memory to run this game. This is the first an only game I’ve had issues running.

Dell workstations are premade pcs with all sorts of wierd components. So yes, they can act in many different ways.

The fact is you have no idea what is inside the pc.

EDIT: allso Aoe 2 DE is not a 90’s game. It is not meant to be a copy for aoe 2. It is meant to modernize aoe 2. So the arguement that you’re pc can run aoe 2 but not DE is not really a fair arguement to make. I am very happy they did not try to dump it down.

Wrong. The only thing prebuilt is the computer case, you completely choose your own components. What is in my PC isnt the issue, the fact that you would even need a high-end graphics card to play a remasterd 90’s game is. You can’t sit there and tell me this game is well optimized for performance.

imagine expecting a remaster to not require high end graphics

That is being extremely nitpicky. While they have propietary cables, motherabords and connections and what not, the components live up to a standard. For instance, the CPU will be the same you will be able to buy at a store. The GPU will be the same you can find in a store and the same for the RAM. Please do not be a jerk. A 3000 dollar PC should yield very decent hardware if it is relatively recent.

The fact is, AOE2 DE is very picky about specific hardware. There are core 2 duo’s running it better than 9900K’s. The game is just very poorly optimized.

Well in order to get this cleared out. Perhaps you would be kind and post you’re specifications?

The point im trying to make is the game is not well optimized, and they knew that prior to launch. There was an entire forum post discussing this very issue.

Exactly. As mentioned before, there were very old processors getting very good performance out of the game, while high end ones did not. And it’s not just a matter of single core performance, as many had that single core only partly loaded.

No longer, since when do you need these requirements for a 90’s game?

The game is completely remastered. It’s like saying COD MWR should run fine on a System that runs COD4 easily.

So you think it makes sense to split up a gaming community of hardcore AOE2 fans by making a $19.99 remaster that requires a $300+ graphics card to play ranked games, when they already had an HD edition that ran perfectly fine?

It’s of course not a 90’s game, but the engine underneath is. In very simple terms, it is that same 90’s game with 2019’s graphics buttercream poored over.

For example, Fallout76 has at its core the same engine as Morrowind. Yeah the games look widely different, but the source code is largely the same. And that determines a lot. It is also the reason why that game has so many glitches, bugs and crashes. And why for instance Doom 2016 has not.

I feel the issue here is that they are pulling a 90’s engine, optimized for graphics and what not for the standards of that time, into 2019 graphics. That’s a big demand.

Funny you used 9900k as an excample. Since i use that.

I got the feeling people exspect to much of integrated graphic cards.

anythign else you need?