MEGA BATTLE of NICOPOLIS (The “Crusade of Nicopolis”) in 1396 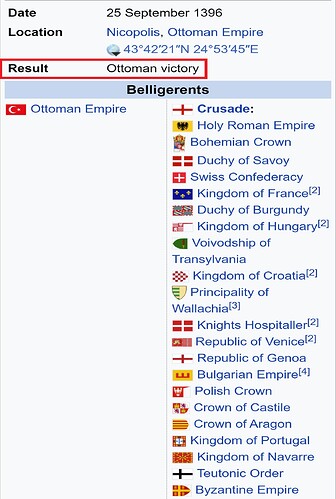 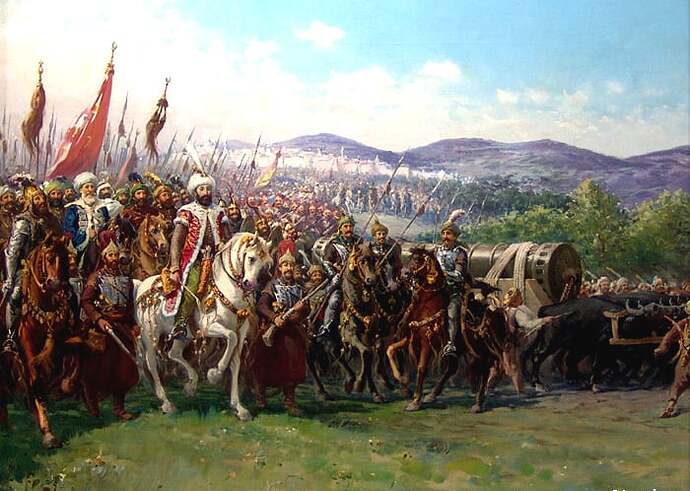 The epic mega Battle of Nicopolis took place on 25 September 1396 (well within AoE4 timeframe of 800-1500) and resulted in the obliteration of a huge allied army of Hungarian, Byzantine, Croatian, Bulgarian, French, Wallachian, Burgundian, German, Swiss, Bohemian (Holy Roman Empire), Polish, Castillian / Spanish, Portuguese, Viking mercenaries, and many other European armies, assisted by the famous Venetian navy at the hands of the Ottoman Empire force, raising the siege of the major Danubian fortress of Nicopolis and leading to the total destruction of the Bulgarian Empire.

The Battle happened after the bombard was invented in Abbasid Cairo in 1360. Ottoman armies used improved early firearms (Turkish hand cannons) Janissary and improved bombards at Nicopolis as well as Sipahi heavy cavalry. The Battle of Nicopolis took place before the arquebus was invented in Spain in 1420, before the major global technology revolution of the musket, invented in Turkey (heartland of the Empire) in 1465, and before the gigantic Great Bombard was first built in 1451 (also in Turkey). It is often referred to as the “Crusade of Nicopolis” as it was one of the largest, most consequential mega battles of the Middle Ages.

What the hell has been going on around here lately. More of this ■■■■? I came here led by the title, curious to see some honest and interesting (and varied) suggestions and get to know historic stuff I hadn’t heard about, only to stumble on more of this freaky Turkish propaganda disguised as a “DLC idea”.

Listen man, I also like their history and actually agree with you that it’s an important civ and I’m hoping for a DLC soon with them (and the Byzantines) and all, but with the other recent topics on the subject that you’ve been, uh… “engaging” on and the way you talk about this obsession of yours, while reading this I was half expecting you to start going on about some ■■■■■■ up supremacist stuff.

This is getting really weird.

I can understand him posting it like once or twice. But they’ve basically reposted a variation of this like 4 times now.

All with this super weird nationalist tone.

Why are you reposting the same thing over and over again? We’ve all talked about the ottomans being a dlc already.

Being a Westerner myself, I have to agree with you and admit the truth; it’s kinda shameful yes, 24 “Civs” losing to 1 (that incredibly wasn’t included in the Base game…). But we need to respect History always. AoE4 should too, better late than never.

Yes, Nicopolis was one of the largest multinational mega battles within AoE4 timeframe. No one can dispute that.

Christ, I thought it would be over when you went in about aoe4 ‘betraying’ history because the ‘savage’ Rus were in the game instead of your beloved Turks. We all get you like the Turks, but you don’t have to force it on everyone.

@FragrantLion957
So posting about one of the largest, most incredible Battles in all the Middle Ages is not “honest”??? It’s “supremacist”??? Jeeez… This TOTALLY deserves to be AoE4 campaign material, infinitely more than boring 100 Years War and Joan D’Arc again.

So yeah, it would be great to see a battle like the Battle of Nicopolis at the age of 4.

Yes, Nicopolis was one of the largest multinational mega battles within AoE4 timeframe. No one can dispute that.

Well, one of the Largest outside of China. They liked throwing hundreds of thousands of bois at people. Europe however had smaller battles but yes, it was rather large for a European battle at the time

And to respond to the OP. I think this would be a nice historical battle scenario (assuming they are gonna have those) but as a campaign it doesn’t work. A campaign covers a larger timeline, especially the ones that have been revealed for AoE4

No, wrong. The 24 European “Civs” most likely outnumbered the Empire. Even some Western sources (hard to trust the side who was obliterated on the spot!!..) say troop numbers were even, including Kings and Generals btw. So even if you’re so naive enough to trust them, your statement… is wrong.

Please provide links, by all means 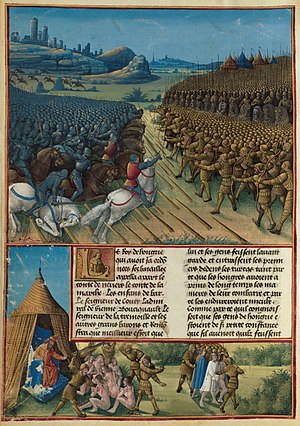 Sigismund, King of Hungary and Croatia

And to respond to the OP. I think this would be a nice historical battle scenario (assuming they are gonna have those) but as a campaign it doesn’t work

Topic ain’t over. Just the beginning. Forgot mega battles of Kosovo? Varna? Mohacs? The battle against Count Dracula which gave rise to the original, real-life Vampire? Great Sieges of Rhodes and Malta? The Battle of Lepanto, the biggest naval battle of History, of Ottoman Empire vs all European nations together? It’s indeed the most epic sequence of multinational mega battles ever seen… all AoE4 timeframe… Joan D’Arc again?

About the previous post. It’s heavily disputed and you use one Western estimate for Nicopolis?? Ha, much to learn…

It’s the most epic sequence of mage battles ever seen… all AoE4 timeframe… Joan D’Arc again?

See, I try to believe you can be reasonable and you say this. You may not be Turkish but you are obsessed with them and OBVIOUSLY biased.

Special Kings and Generals (Western perspective) video on the mega battle of Nicopolis 1396, a bit oversimplified, not totally unbiased but cool and informative nonetheless! 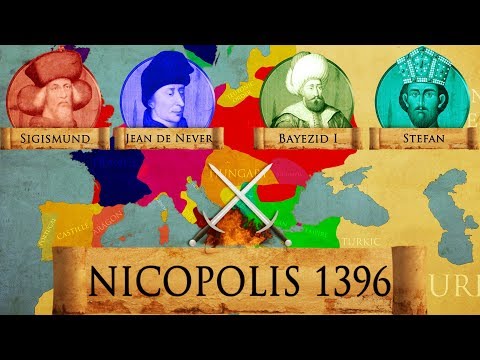 The main merits of this Kings and Generals video is that it mentions the crimes of the French, estimates troop numbers as roughly equal, and points out the crucial fact the Crusaders, unlike the Empire, did not have Bombards (at that time only Ottomans and Abbasids had bombards), and therefore could not smash their way into the fortress of Nicopolis. It was their long, unsuccessful blockade siege that set the stage for the Battle of Nicopolis and the destruction of the Crusade.

A cool, omitted fact from K&G video is that Nicopolis was one the few head-on clashes between two of the very best heavy cavalry in the world… French Cavaliers vs Kapikulu Sipahis (more tanky version of Turkish heavy cav Sipahi)

We get that the Turks should have been included in the base game, as they were very important and powerful in the Middle Ages. But you can probably stop posting the same thread in different variations now

This is clear bias. It’s nearly an advertisement for cultural superiority. Sure, I do admit, they had significance during the time. Nevertheless, being a superpower doesn’t make the nation grand and flawless. Your descriptions of them clearly show incredible bias and supremacist views.

supporting the belief that a particular group, especially one determined by race, religion, or ■■■, is superior and should therefore dominate society.

Your other posts have made this even clearer. One was about the Turks not being on release which apparently betrayed history and AoE spirit, whatever that’s supposed to mean. The other was an actually well-written and put together post… until the third point was another supposed betrayal of history. If you want some more topics to study other than ‘turkish superiority’ I’m sure a lot of people in this forum could tell you.