I’ve made two Modder Maps to help you find inspiration for making mods! These maps are meant to be ‘visual dictionaries’ for you to browse objects and terrain in the scenario editor by seeing them fully rendered instead of scrolling through lists. It’s fun to look around at everything even if you’re not making a mod!

This map shows 6,400 combinations of layered terrain in a square grid! Each terrain block has a sign that gives info on the terrain when you click on it. There are also extra features like changing the map’s color mood, and jumping to the opposite terrain block of the one you currently have selected. Here are some screenshots: 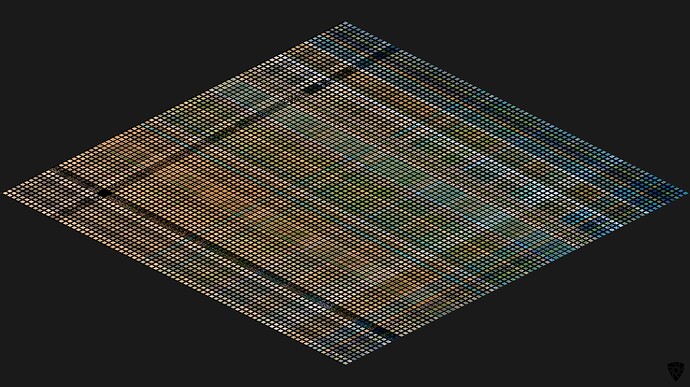 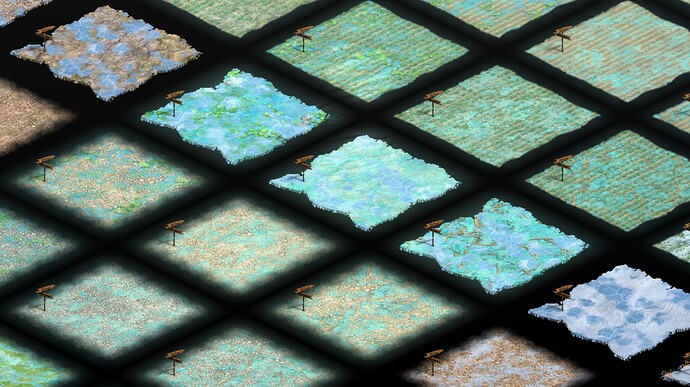 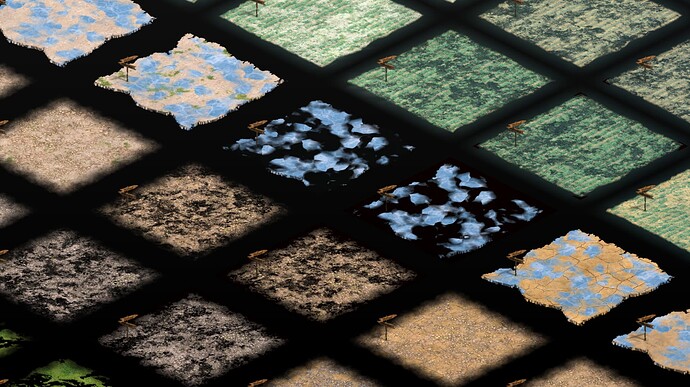 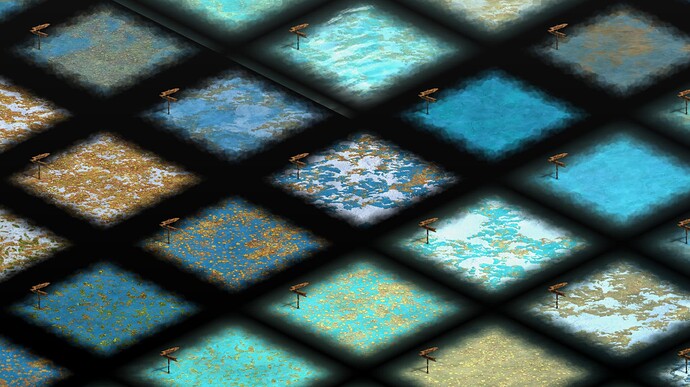 This map shows all of the Heroes, Units, Buildings, Objects, Trees, Plants, and Animals available in the map editor! There are various groups of the units and heroes (e.g. Melee Infantry Heroes, Ranged Infantry Heroes, All Heroes With Unique Sprites, and so on). Each group has a sign next to it that gives info describing the units in the group when you click on it. All objects are placed with little or no visual overlap, and are arranged alphabetically in horizontal and vertical rows & columns so that you can easily move around each group by scrolling or using a single arrow key.

Just for fun, you can also play Micro Madness mode where all the Units and Heroes are given randomly to P1 - P8

I will add more features to Micro Madness over time. 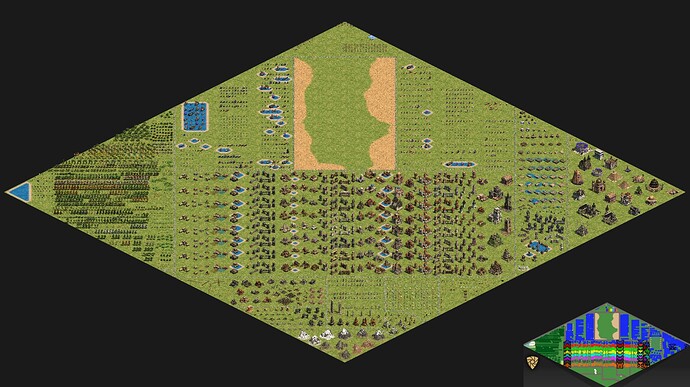 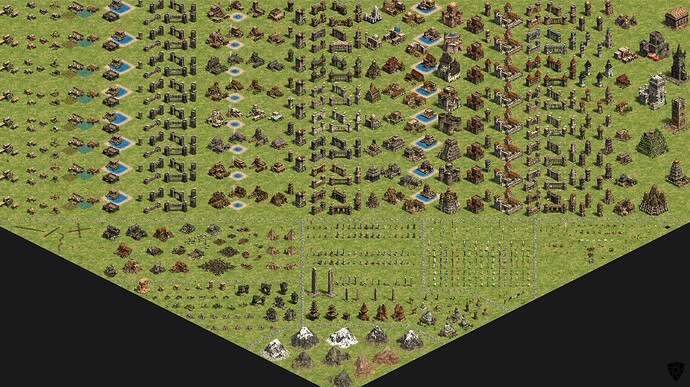 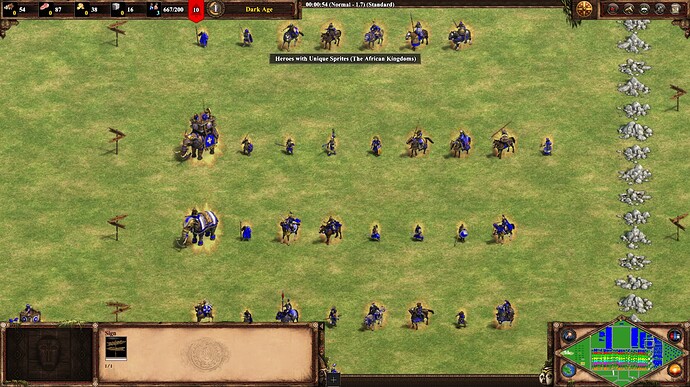 Note: The Layered Terrain map takes longer to load than most other maps.

Big shoutout to the developers of AoE2 Scenario Parser. Scenario Parser is an excellent Python tool that I highly recommend to anyone making mods for AoE2. The terrain map and Micro Madness minigame never would have been possible without it.

Thanks for checking these out and please let me know what you think!

Super awesome work! I spent a long time testing out the various terrains and was very close to making something like that but had mostly figured out what I needed by then. Will save people a lot of time for sure, there are lots of unique combos.

@CutmanFS Thank you! I used Python code to make the terrain blocks and sign triggers for the terrain map. But all the objects on the ‘All Units and Objects in AoE2’ map were placed by hand. It’s been a ton of work but I’m very happy with how both maps turned out. Hopefully you and other mod makers find some good inspiration.

Please let me know if you’ve tried out either the ‘Jump to Opposite Terrain Block’ feature in the terrain map, or the Micro Madness game mode in the All Units & Objects map! The Micro Madness game is just for fun. Right now it leans in favor of whoever gets the Cobra Car XD But I’ll add more features and improve the balance over time. Might add things like objective points and powerups and stuff to make it more of a standalone minigame.

Thanks again for checking these out! I’ve got two more mods coming out soon

It seems alright, but I have two suggestions for the terrain map. What settings are you meant to play it on? Is it meant to be all explored, or use cheats, because otherwise you don’t really seem to be able to see everything. Maybe address this if it is an issue? Secondly, it’s really finicky to toggle the color mood setting. I personally would use six kings and 13 triggers (19 if you want security against king deletion) and create a fairly fancy method of setting the mood, where each king can be moved one tile to activate their color mood, and moving a king causes all the others to move back to their starting position.

@TheConqueror753 Good ideas; thanks for the input! I’ll make the whole map revealed by default, since you’re right that my intention is to have the map always revealed at least with cheats anyway. I just tried updating the mod but am getting an error ‘Failed Updating Mod - Error: Unknown’, so I’ll publish the change as soon as this error is resolved.

I’ll need a bit of time to redo the Change Color Mood setup. I had figured it was simplest to just select the color king that you want, but I could use colored flags that you move different king units to if that would be preferred. It worked well initially with just selecting the king units without moving them since having the grass terrain squares at the corners between the terrain blocks doesn’t interfere with how the terrain blocks look, but since that’s such a minor issue it wouldn’t be a big deal to make the king units movable as you suggested. Could you elaborate on what you mean that the current setup is finicky?

@TheConqueror753 Gotcha! I just published an update for the terrain map v1.01 where the map is fully revealed by default, so that should improve the performance of the color change option for you as well.

Ok, cool. That should be better.

In the units map, you have the Jarl grouped as a melee cavalry hero. It’s actually ranged, although it does melee damage. I assume you would want change it, because you have the throwing axemen style units categorized as ranged infantry.

FYI I just published an update with the Jarl moved to the correct place. Thanks again!

Another thing, in the description of layered terrain, you should explain what it is, because it isn’t really that apparent, and most people have never used it.

Thanks for the feedback!

I don’t think I can edit the original post here anymore, but I’ve updated the mod description and changed one of the preview images per your feedback. Please let me know if you think this clarifies things better. Thanks again for the feedback, I really appreciate it. I added your username in the ‘Special Thanks To’ section of the victory / loss screens 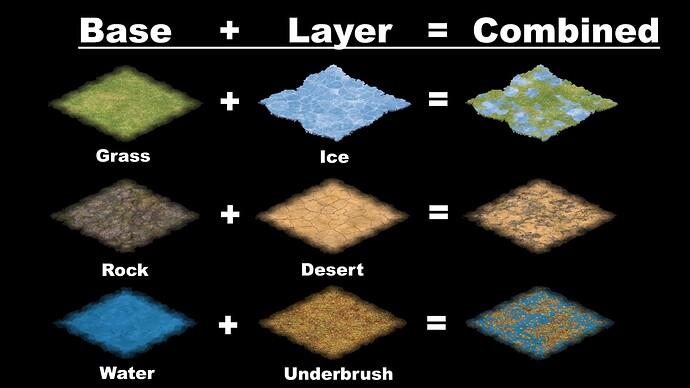 That looks a lot better.

I’ve just updated the ‘All Units and Objects’ map to include all of the hidden rubble, corpses, units, cliffs, & projectile objects that you can unlock with A.G.E.! Check it out to see even more of what’s possible with AoE2

Here’s the new screenshot of the full map: 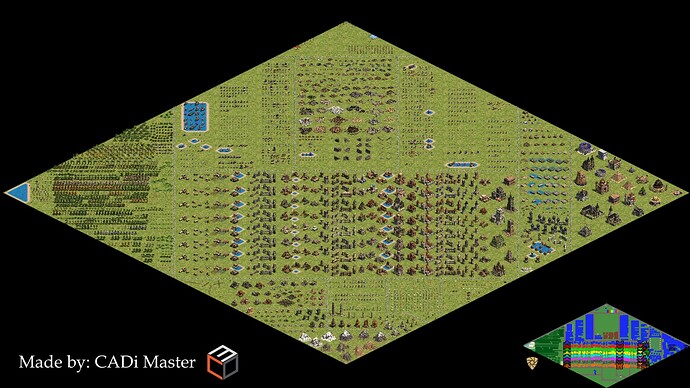 I made an 8K-resolution screenshot of the terrain blending map! Looks really cool when you zoom in. 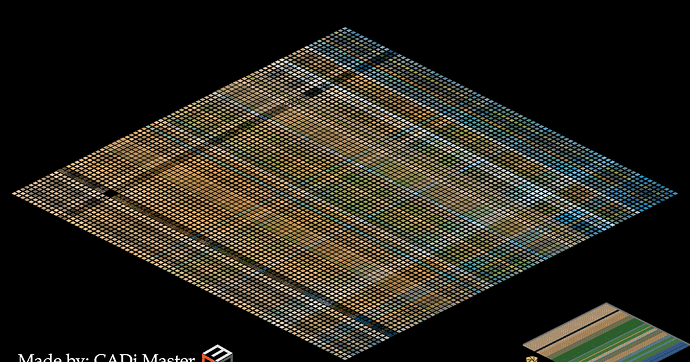 If you have a map like that, you could consider adding the terrain types as labels along the edges, kind of like co-ordinates.

Good idea; I’ve been meaning to add extra signs along the edges of the map in-game that label each row and column, so doing the same for the 8K screenshot would probably help too. Thanks!

I added labels to the 8K screenshot for the terrain map! Thanks @TheConqueror753 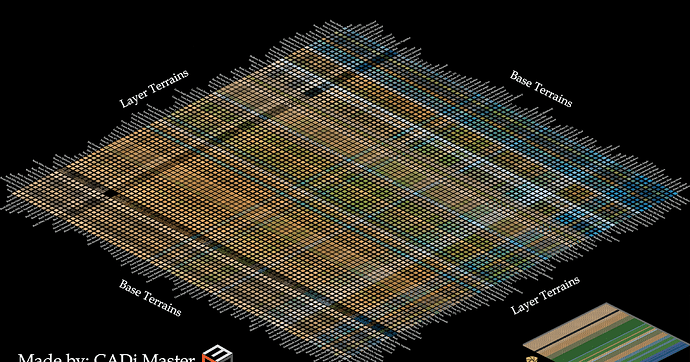 Also made an 8K screenshot with a legend for the units & objects map! 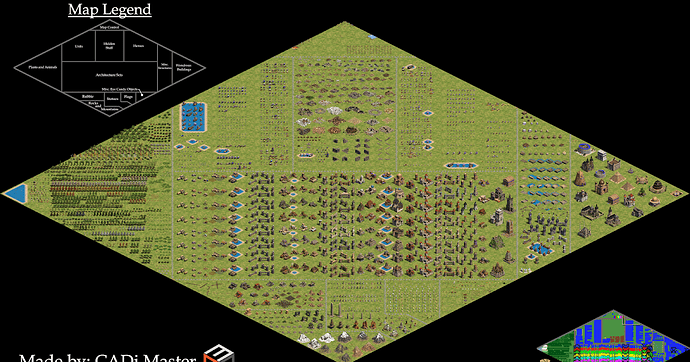