My reasons I find AOE 2 2013 better. Classic look. More mods and scenarios. (there’s literally a LOTR mod on steam for example) Less insane balance changes. Works better with people with awful PCs. Peer to Peer hosting can be great when everyone has good PCs and Internet in the lobby.

Definitive Edition 2 does not give the option to Peer to Peer hosting which is very bad I think.

With the rate the devs keep breaking this game - yes. No one cares about the new ‘features’ and ‘gimmicks’. They care about a smooth match.

There is a reason why pros stayed at Voobly and never moved to HD (2013): HD was a terrible lag fest and has lots of crashes. The ranked queue and all other (QoL) improvements makes DE so much better. Also it looks likes the devs care about DE much more. In the current state TGs are unplayable at DE, but the devs are working on a fix. HD lag never gots fixed by the devs. Some months ago i just tried HD again. That was a really bad experience.

Agreed, whoever chose HD in the pool probably never played the MP part of HD

HD has more mods, but it’s 7 years past its release

This game just got 1 year past its 1st year

Thing is. If everyone has good PCs and good Internet HD tends to run fine. Just that you get so many players with awful PC and Internet ruining lobbies.

Then people would find HD performing better than DE, right?

That’s not the case though,

HD was still laggy when DE was close to release

Age of Empires II: DE is a better game because more time and energy is being poured into making it better than HD ever received.

Age of Empires 2 HD / 2013 was the buggiest trash ever for years. It is by far the worst platform of the game. It’s only good side - accessibility, because anyone knows how to install steam, and the game can ruin on fairly weak PCs. But there’s a reason why everyone who was serious about the game switched from HD onto Voobly/userpatch. And I guess currently another good side is compatibility with all the old mods & scenarios, but all of that is included in UP version of the game. So if you absolutely don’t want to play DE, then your only option is userpatch 1.5, not HD.

The multiplayer feels buggy, has some form of inbuilt delay. Elo system is buggy, lategame 4v4s always lagging. Most annoying issue is the lag, which DE helps with due to you not depending on the network speed of the other players in the game(but ofc DE still has the issue where others PC might lag you). Pathing worse than DE and CD version. Unable to Save and Restore multiplayer games. Some campaign missions are broken. Can’t select the 1.7 gameplay speed in multiplayer, the one which has been the competitive standard on the Original game/voobly and on Definitive Edition. Can’t spectate games without occupying a player slot. Everything else also inferior than DE.

much cheaper to get all content (15 euros DE vs 50 euros HD). In DE you get all of that which is missing/bugged in HD, plus 4 more civs, lots of new campaigns, new matchmaking queue, QOL features like smart walls, shift queuing commands, more hotkey options, UI mods, selecting resolutions, server based MP, better AI and on top of all that more players. But of course currently some issues plague the game like slow bug fixing and bad playtesting of patches. But even with these issues, support for DE is miles better than it was for HD, where u sometimes had to wait a year for a bugfix.

Other than that it’s pretty good

I can relate to that

Sometimes I miss those bangers of soundtracks that were in the original.

But the OST here is really good too.

I know the point wasn’t about OST, but I just put up my prespective

I’ve been playing aoe2 since zone.com in early 2000s and AOE2 HD has brought the worst experience for me in terms of performance and players level. AOE2 DE might not be optimal but its far far better than HD.

DE is supposed to be backwards compatible with HD, here’s to hoping they follow through.

Only reason that I cant think there is still people playing HD is old/poor performance PC. (Oh and critical DE bug that prevents user playing multiplayer too! Dont know any but read it here in the forums I guess there is still ppl)

If only they stop breaking the game with every update DE would be great.

Devs, please, if you can’t improve performance at the very least don’t make it worse!!

DE is supposed to be backwards compatible with HD

source for this claim?

Something that was said when it was being made or in the early stages of release, the devs said that it was planned, I don’t remember where it may be found rn tho

the developers have already received a good portion of negativity from us, maybe it’s time to stop? I think they tried on the DE, it’s too offensive 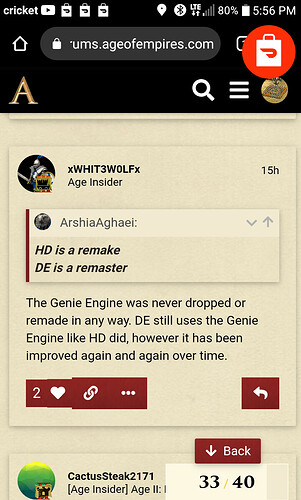