Is it worth investing into fish traps on small lakes?

I find myself doing this a lot on black forest. (note I won the game) Especially when I’m this lucky with this map generation. Would you do the same if you saw you were this lucky in my game?

I was Persians in this game. I often try use my fishing ships to eat up the shore fish in the lake. The few fishing ships I had in the dark age helped me keep producing villages just a little bit easier. Later in the game, I even got Gillnets to make the fishing ship gather from the fish traps faster.

I often don’t wait until the shore fish is gone (since I don’t want to forget about the fishing ships) I just make a few fish traps in the feudal age, and set auto to reseed. They allowed me to save a ton of wood, and have a little better economy in the early game. Everyone else is only making villagers, but with just a few fish traps on top of normal farms, I found my eco great. I even saved a lot of wood for trade carts to help me in the late game when gold mines run out.

Not only did the dock provide me with an economic boom in the early game, but in the late imperial age, I made cannon galleons for defence. When they tried to break down my wall my canon galleons helped greatly holding them off. They even tried to flank me in the forest by cutting trees with onagers, but my cannon galleons stopped them dead in their tracks. I made a big wall there, and a castle for extra defence in response.

Later in the game. My defence was really great. I made cannon ships in the water. 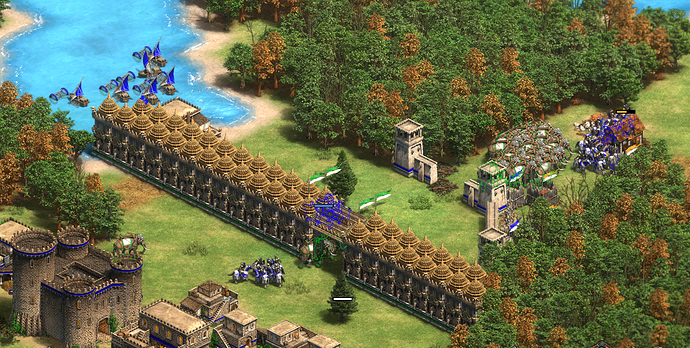 Look at my cannon galleons.

Fishing ships with gillnets (or maybe even without it?) collect faster food than farmers (even with all upgrades), so why not?
Wood is not a problem in Black Forest, but land space sometimes is.

But it’s such a big investment to get out a dock and pay for the fishing ships.

You save a ton of wood in the late game. Since you don’t need to reseed much sooner. Plus, having some fishing ships helped me make a few more villagers early in the game. My town centre had virtually zero idle time.

But fishing ships are expensive, docks too. Resources are far more valuable in the early game, I’d rather have 100 extra wood in the Dark age than 1000 extra wood in Imperial.

The investment paid off since I had a huge food boom early in the game. I was able to keep making villagers far more easy than everyone else. I only made about 6 fishing ships. The rest were farmers. The fishing ships saved me tons of wood when it was time to reseed my farms.

Plus, I was Persians. So my Town Centers were faster. And the wood I saved, help me make tons of trade carts far more easy for the late game.

You don’t need 40 fishing ships, even though I’ve seen that on BF.
You just need 8-10 for each pond to make it worthwhile, and as the OP said, you can go cannon galleon later to snipe siege weapons.
Also wood is better than food in castle age, in feudal it might be a little hard to fully commit to it, I agree.
In feudal you can create just a couple of ships to fish the shore (usually 2-3 per pond).

And of course if you’re Malay is always worth it.
But I don’t know how many would play Malay in BF.

Also wood is better than food in the castle age, in feudal it might be a little hard to fully commit to it, I agree.

Food is the scarcest resource in the castle age.

In feudal you can create just a couple of ships to fish the shore (usually 2-3 per pond).

You can make villagers far more easy with extra food coming in. So, it’s worth it sometimes. The idle time can be far less on your town centre. If you just have the bet more pop space than everyone else.

But it’s easier to put down multiple farms than it is to make a fishing ship.

You only have one town center until castle age. Each villager takes 25 seconds to make. Not including idle time.

But a fishing ship is so damn expensive, it’s just not worth it.

And also, if you are just gonna say “fishing ships are worth it”, why did you make a thread asking whether they are?

Look at what happened in my map. Not only did I get an economic boom early in the game, but my cannon ships destroyed the enemy team. So I got both defence and eco from that dock.

Food is the scarcest resource in the castle age.

Exactly.
With “wood is better than food” I meant that you can spend wood without hindering yourself as much as you’d do spending food, as you need to keep TC running.
200-300 wood is what people usually spend on double archery ranges/stable in feudal age. If you can do that, you can spend the same in castle age.
Also fish traps provide 715 food, usually in almost all castle age farms provide only 250 (only horse collar researched). So to gather roughly the same amount of food you’d need 180W compared to 175W (fishtrap+fishing ship), a fair trade in my opinion, and with right positioning fish traps can be made 1 tile away from the dock for maximum efficency.

Why are you asking “is it worth it?” if you are too stubborn to admit anything other than your point of view? Just because you won that one game with this strategy doesn’t mean it’s a good strategy.

With “wood is better than food” I meant that you can spend wood without hindering yourself as much as you’d do spending food, as you need to keep TC running.

I tons wood saved to make trade carts for the late game. So, it paid off in other ways.

Usually on BF stone walling is the thing that delays most the placement of extra TC, because forces you to mine stone early, diverting vills from “regular” tasks. If someone has wood problems on that map, I don’t know, but something is wrong with his/her villager resource gathering.
If you have 2 ships, you can put 2 vills less on food, and 2 more on wood, and wood is the resource that vills gather faster.