Is livestock pen reasonable for Japanese?

I know that the Dutch ally’s Livestock Pen shipment is really powerful and important for Japanese.
I mean, culturally, is it reasonable to provide Shrine Goats by the Dutch?

The status quo is that the Japanese need to negotiate with Europeans and spend as much as 900 export to use the foreign facility to provide sacred animals for their traditional religions. Is it reasonable?

Perhaps we can add a tech at Shrines in the Industrial Age. This tech costs 900 export too, and allows Shrines to train their Shrine Goats. The Livestock Pen can then be removed from the Dutch ally, slightly nerfing the overly powerful Dutch ally by the way.

Their own sacred animals are trained at their own holy sites, I think this way is more reasonable.

For better, the goats can be changed to sika deer.

In Nara City, more than 1,000 sika deer live in Nara Park near Kasuga-taisha Shrine, Kofuku-ji Temple and Todai-ji Temple (Wonder in AoE2). These deer appear to be wild, but they are actually protected and managed by the government and local residents. According to local folklore, sika deer from this area were considered sacred due to a visit from Takemikazuchi, one of the four gods of Kasuga Shrine. From that point, the deer were considered divine and sacred by both Kasuga Shrine and Kōfuku-ji. In the park, deer are able to roam freely and are believed to be sacred messengers of the Shinto gods that inhabit the shrine and surrounding mountainous terrain.

I myself have traveled to Nara and watched the deer up close, so I can confirm the connection between the deer and Shintoism. Also, I haven’t seen a document that says goats have a higher status than deer in Shintoism. So it would be interesting and more accurate if we could introduce herdable deer into the game.

Of course, these are not very important items that need to be changed, so I’m not eager to ask the change. But I think these only require a little work to make it more reasonable. 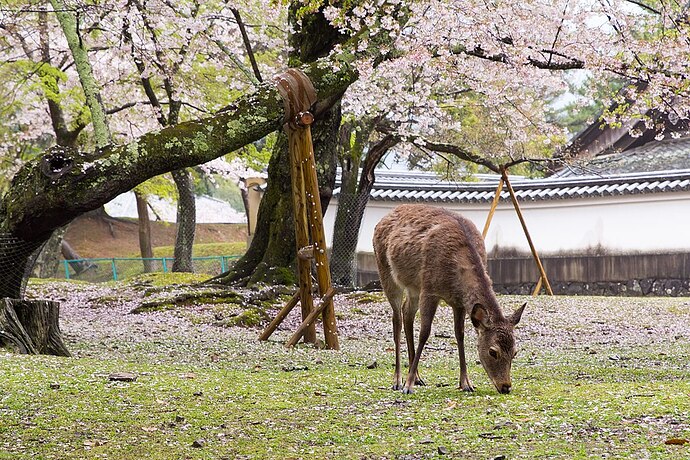 Nara Park (奈良公園, Nara Kōen) is a public park located in the city of Nara, Japan, at the foot of Mount Wakakusa. Established in 1880 it is one of the oldest parks in Japan. Administratively, the park is under the control of Nara Prefecture. The park is one of the "Places of Scenic Beauty" designated by the Ministry of Education, Culture, Sports, Science and Technology (MEXT). Over 1,200 wild sika deer (シカ or 鹿 shika) freely roaming around in the park are also under designation of MEXT, classified ...

Kasuga Grand Shrine (春日大社, Kasuga-taisha) is a Shinto shrine in Nara, Nara Prefecture, Japan. It is the shrine of the Fujiwara family, established in 768 CE and rebuilt several times over the centuries. The interior is famous for its many bronze lanterns, as well as the many stone lanterns that lead up the shrine. The architectural style Kasuga-zukuri takes its name from Kasuga Shrine's honden (sanctuary). The Torii at Kasuga-taisha is one of the oldest in Shintoism and helped influence the st...