Is nobody else concerned about the population limit?

With everybody -myself included- talking about the units visual style and animations, or the buildings-units scale, I’ve just seen that the population limit seems to have skipped on people’s attention.

We have confirmation of 1600 max population in the map, which means a maximum of 200 per player, and most probably with some units taking 2, 3, 4 or even more (¿elephants?) population points. I understand that one of the game’s targets is being playable in a wide range of systems, but am I the only one thinking that 200 maximum population per player is a bit ridiculous for a 2021 medieval war AAA RTS? 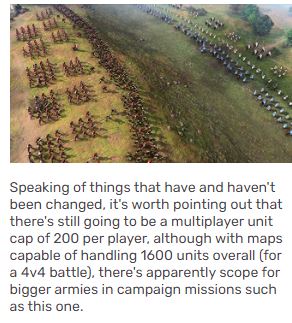 Honestly, having the same limitations and system than in Age of Empires III 16 years later feels kinda disappointing for me. Age of Empires II Definitive Edition has hugely pushed the limits and it has been a success -yes, 2D and older engine, I know, but it’s already 2021-, and while competitive multiplayer and pro players tend to play without a big 400-500 unit limit, there’s a lot of people that like to play both against the AI or with other players with a bigger limit (most of my online games are with at least 300 population limit).

Doesn’t Age of Empires IV deserve real big battles between more players? What do you think about this?

I think anything more than 200 units is too much. Chess has 16 units per side. Futbol has 11. I am not sure 300 units would make the game better. Age of Empires never has been a war simulator. It’s always been a goofy game with limited game pieces. That’s how I like it.

I understand there are mods that bring that number higher, and I understand that many players here may have strong feelings that we need many hundreds of units per side. But it would feel very strange to me if the default game went past 200.

Too much why? I mean, I’m used to play AoE II DE with 300 or more and I find it absolutely fun. Chess has 16 units per side because the scenario has the size just for it. Football has 11 per side because the game terrain has a calculated size for that amount. But you know, in AoE games we have different sizes of maps… having a 200 cap for both medium and big would make no sense imo.

300 units per side is not that much, especially if they keep the AoE III system (most likely they will) in which some units cost a lot of population by themselves.

And most important, you can always set the limit to a lower amount if you want to, but if the maximum available is 200 that will leave no room for those who like to play with a lot of units and clash in more battles simultaneously.

I certainly dont care if the maximum number of units is infinite. I only meant to say that I am not concerned about the 200 population limit.

I assume part of the calculation is how laggy the game would run with tons more units on the field, but I dunno.

Please show me where they say that there will be a 200 pop cap? They say there is a MP unit cap of 200, not surprising. But with maps capable of 1600 units overall I wouldn’t be surprised if the unit cap can be adjusted in skirmish or unranked lobbies

And most important, you can always set the limit to a lower amount if you want to, but if the maximum available is 200 that will leave no room for those who like to play with a lot of units and clash in more battles simultaneously.

That group is fairly small.

I tought I totally skipped that in the fan preview, since I’ve already seen it in a few different specialized webpages, RockPaperShotgun and Windows Central included:

Also understand the possible lag part, but still having a bigger possible limit would harm no one imo.

I really hope it can be adjusted with a bigger limit in unranked games, but in the different websites I’ve seen it all state the same 1600 limit per map.

About calling that group fairly small… could there be some data site to look for it? By experience, I don’t think it’s that small, tho.

I really hope it can be adjusted with a bigger limit in unranked games, but in the different websites I’ve seen it all state the same 1600 limit per map.

Like Andy said, the devs or microsoft have not officially said the pop cap can’t be tweaked

About calling that group fairly small… could there be some data site to look for it? By experience, I don’t think it’s that small, tho.

200 pop has always been the standard for age of empires series both for casual and competitive play and to make the game less laggy, and it’s the best way to balance the game units as time units strength rely on the numbers, take the aoe2 elite war elephants for example despite them being hard counter by pike units (60+ bonus damage) they became a literal beast when they are in big numbers and they can kills almost all the pikes that are throw at them with their trample damage and high attack and they are very tanky (600 hp) and they are really strong in team games, but when they are in a low number they become weak to their counter.

however i believe it will only be 200 pops for rank games, but the campaign and lobbies might havea bigger numbers

I am concerned, map making must be supported and the bigger the maps the better, there is no such thing as too big. A driving force for small is Ranked matches and Ranked maps, that have been the community over the years. Make no mistake AOE is for young people or people trying to get a bigger grasp of history in a edible way. The bigger the maps, the more unit population cap, the bigger the scope the better.

I think 200 is fine, but presumably there will be options for smaller or larger caps.

200 as the standard should be fine so long as we have the option to scale up the cap should we so choose. It is also probably worth noting as well that the 200 is not likely going to mean that you will field 200 units max since there will likely be different pop cap cost for different types of units(which is totally fine)

300 units per side is not that much, especially if they keep the AoE III system (most likely they will) in which some units cost a lot of population by themselves.

At the end of the Gameplay Trailer, we can see the pop of the Chinese evolving when they create military units.

They start at a pop of 146 before creating 4 foot soldiers and going to 150 pop.
Then, they create an additional cavalry unit and have a pop of 151.
Finally, we see them creating a siege unit, bringing their pop to 152.

So, at least on these three types of units, the pop cost is always 1.
Now, it is possible that some bigger units (elephants?) might require more than 1 pop.

Here are the screenshots of what I mentioned: 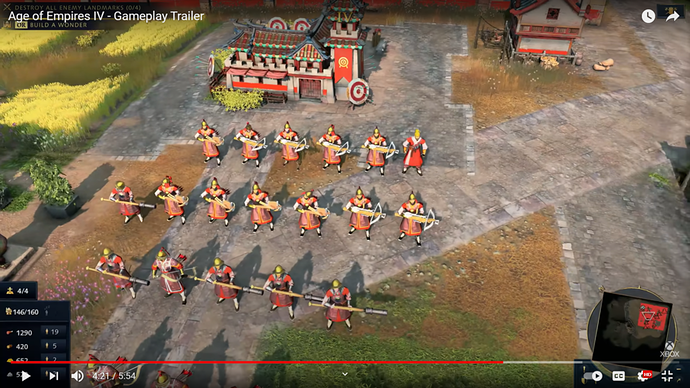 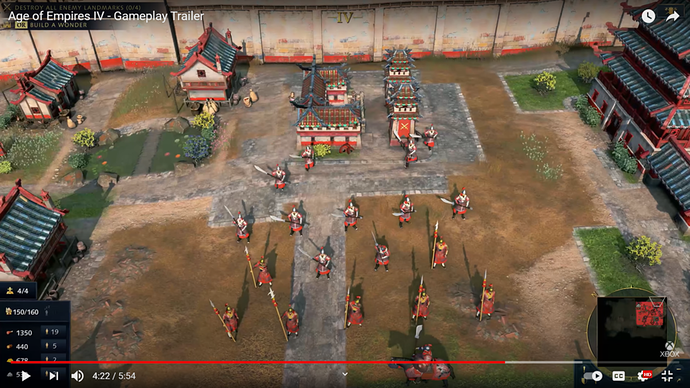 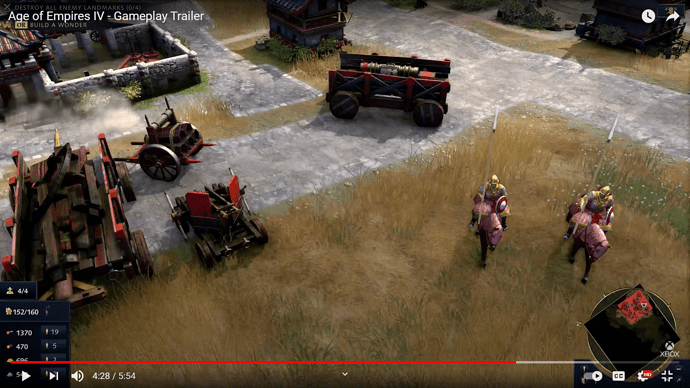 They also said that the economy will require far fewer villagers so we can dedicate much more population to military.

Misunderstood that one I think.

Would be an odd “this time” then because that’s how it’s always been.

I think a hard population limit is bad game design.
It doesn’t feel good hitting against a hard number limit for the amount of units you can train.
Especially in late game AoE3 you collect the resources to build a 100 population worth of troops in a minute. That means you can can rebuild a complete army every minute. That’s just spamming troops especially with the fast building speed.
In AoE2 without the villager limit you can even have more than half of your population made of villagers.

Other games like Command and Conquer don’t have a population limit (or I just never reached it) but they limit the resource collection in the late game instead. This feels way more natural and less like hitting against a hard limit.

The hard population limit is my biggest concern about AoE4. It just feels like a hardware limitation from the 90s.
AoE1 was designed around a limit of 50 while AoE2 already allowed for a limit of 200 (the campaign was limited to 75 in most missions). Now we are still limited to 200?
A lot of the trailer scenes have more than 50% of the population worth of army in one single battle.
I don’t want Total War like battles, I just don’t want to hit against this invisible wall in the late game all the time.

Although it says it’ll cap at 200 each in multiplayer, all likelyhood they will change this before release to be toggleable in unranked lobbies and SP.

But if units are all one pop space, it won’t really matter too badly

If all units are one pop space it will be impossible to stop a full pop Elephant army.

AoE4 is to much like AoE2 in multiple ways.