Italian rebalance, how do you feel it?

Reduced the price reduction of

The civilization now also receives a 33% discount for all

Hi guys,
I was pretty convinced that this civ was the worst in the game. I am curious to think what you feel about it now with this new land-water rebalance!

I am wondering how useful the bonus can be, in addition to its main (and very good) effect on ballistics and chemistry

Overall I think the rework is ok, bringing Italians from a bottom civ to a ok/weak level, similar, say, to spanish…

I usually try to test the new patch before commenting, but in this case it is clear that it’s more of a nerf than anything else…The only go-to techs at the university are ballistics and chemistry…and the discount is a meager 33%. Also, still no buff to HC.

I am pretty sure that university discount was once proposed and discussed on the forum.

Patch noted gunpowder accuracy some kind of Bugfix. This might help Italians too.

We should wait a month for results and watch aoe stats. I you say ports and Koreans are fine now than so are Italians.

well, let’s see, though I am not that optimistic. But this patch finally improved CAs and removed house scanning, so overall a big improvement regardless.

I still think that now water meta will be all vikings though.

People were crying out lout to buff their archers, now they got a huge buff not only for xbow but also water with fast ballistics. Also sturdier buildings with fast masonry is nothing to sneeze at.

So, I just read the patch notes, and of course I can’t say anything for sure…

I like the direction of the changes, really much. Having discounted ballistics and chemistry is really useful for an archer civ.

But I’m not sure on the percentages, on water it seem a big nerf, since saving 33% on ballistics and chemistry doesn’t seem to compensate for losing 17% on all dock techs, I would have gone for 40% on both, but I’ll have to do the math to be sure…

Again, I would have preferred a increase on range, but I like this direction too, of making less gold intensive than standard xbow, but again, I’m not sure it’s enough (I mean, a CKN cost just 35g).

It’s a positive thing that devs thought about some changes for the civ, let’s start from that.

overall, I like the changes
the effectivness of the % has to be tested, so can’t really say anything about it.
cheaper ballistic/chemistry is nice, helps in land and in water (compensating the reduction of the dock techs discount)

overall, the civ still feels very vulnerable in the early game, but if they can manage not to get too much damage, they get a power spike in castle age. Seems a bit of a push towards skipping feudal age battles as much as possible. Which is okay per se, not every civ has to rush (cit.), but we have to see if it’s actually a viable strategy plan.

Where do you found this info? I dont see an announcement thread at this forum?!

Italians needed help in the early game (on land). What they got is a nerf on water. It’s a bad change.

Where do you found this info? I dont see an announcement thread at this forum?! 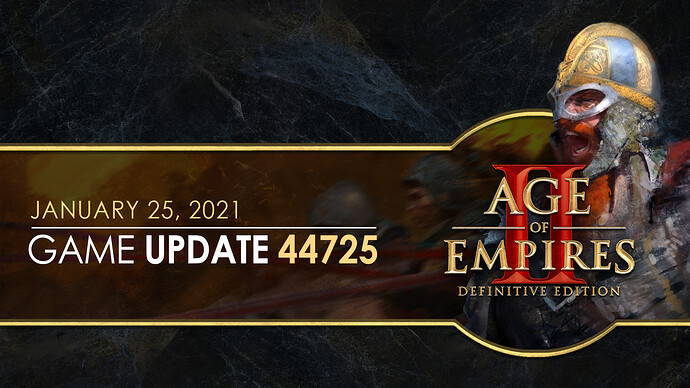 Welcome to another monumental week for Age of Empires II: Definitive Edition!

I disagree. They got a strong buff for early Castle on land maps and the water bonus is still strong for fast tech power spikes. I’m starting to see a pattern with fast tech advantages for them (cheaper up, cheaper dock and better xbows due to fast ballistics). They also have a very good tech tree. It’s a good change in my opinion.

Also, they have 33% discounted heated shot, and ballistics and chemistry also affect ships. And Masonry and Architecture are good for defending docks or even other buildings after cannon galleons are a thing. Not a big change, but at least they still have their uses on water. And bombard tower tech is also discounted.
I wont consider arrowslits because I prefer to use castles at shores.

The university buff have noticeable effects on land plus the side water effects I mentioned above. I like the change.

Ok, here are the exact numbers:

Now, I’ll admit that I thought it was more of a nerf for water maps, but in imp the hit still is quite big. On castle age things will be more or less the same, but consider that now you will also ballistics sooner, saving the same resources at the same time. This is positive, since if you take advantage in castle age it matters less if you are nerfed for Imperial age. But 400 res in imp can’t be ignored either…

In general, I think that the direction is the right one, just that the devs are playing safe. They prefer to first trow in the new bonus as see the new meta develops, and then adjust it accordingly.

In the end it’ll not be difficult to eventually buff this bonus, it can be transformed into 33/40% for castle/imp, or they could buff the age up from 15% to 20% (maybe now my preferred option).

But this will require months, since we need to see how Italians now performs on land, water and hybrid maps.

We have to consider that now Italians saves a lot of resources even just on land maps, but most of the university techs, while being useful, aren’t that crucial.

As for the GC, I kind like the direction, but I don’t understand the change. If they would have reduced both the wood and gold cost, I would say that they want to let us train more of them (with 5w/g saved it would be like 1 for free each 4 as they are now). If instead the gold cost was actually reduced by a bit more (like 10g), I would think that they wanted to make the less gold intensive options for archers.

But just 5g alone less, it doesn’t convince me…

As for the GC, I kind like the direction, but I don’t understand the change. If they would have reduced both the wood and gold cost, I would say that they want to let us train more of them (with 5w/g saved it would be like 1 for free each 4 as they are now). If instead the gold cost was actually reduced by a bit more (like 10g), I would think that they wanted to make the less gold intensive options for archers.

But just 5g less, it doesn’t convince me…

I agree the problem is not the cost. Elite upgrade should be improved a bit in stat. (+1 dmg/range) With this change, skirmisher/mangonel/rams are still good counter against GC.

BTW, nerf in dock discount comes with university tech discount as a compensation is a good change overall.

Still I think that the civ is now decent in castle/imp age in land, but is till badly sucks in feudal.

The university bonus may come into play in mid castle age. At that moment Italians are already dead.

I don’t think the water nerf will change much. Their castle age strength remains the same, and the only issue is up to -600 resources in imp with cheaper chemistry (assuming no ECG or Fast Fires). It’s somewhat redeemed by the fact that you might make use out of heated shot, masonry or tower upgrades on water maps too. Maybe with appropriate meta adjustment Italians will remain as strong as they used to be. Plus, many games are decided by the advantage you got from Castle age, so even if Italians end up being weaker in imp, it won’t affect their performance too much.

the water nerf is killing. Despite almost surely loosing the top 2, Italians still remain a solid water civ, I am fine with this

Only in imp it’s a nerf, in castle age it’s just few resources less so it’s negligible. But early imp was the moment when Italians shined, so that hurts…

I disagree, I think that now italians (with also the cheap age up) can safely prioritize the university and have ballistics right away.

I agree on that.

People were crying out lout to buff their archers, now they got a huge buff not only for xbow but also water with fast ballistics.

In general, for water it’s a nerf, since it’s still less resources. But it’s a good buff for their archers.

Also sturdier buildings with fast masonry is nothing to sneeze at.

Grabbing those techs more easily is useful, but not game changing.

I mean, the idea can be good (even though most of us thought of different buffs…) but I see how just 5g can make the difference.

Italians needed help in the early game (on land). What they got is a nerf on water. It’s a bad change.

I disagree. Early game can be improved by buffing the age up discount to 20% yes, but other than that I don’t think they need anything else.

Being able to get ballistics earlier it’s good in my opinion, and castle age it’s the moment when Italians should shine.

HS can be useful, but I wouldn’t consider it a buff since the tech isn’t that important, like most of the university techs…