It's time to bring back Early Knight for Mongols

After being nerfed so many times, the Mongols have finally become the bottom tier.

What about do something crazy for Mongols? Does anyone remember the horrible Mongol early knights in the closed beta ? It’s the right time to bring them back now.

wait for it to come down first 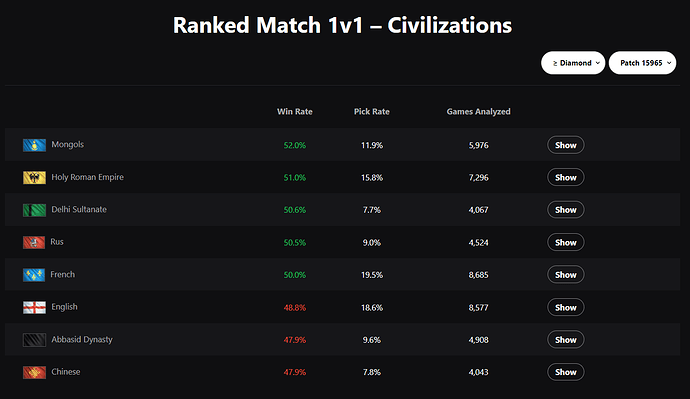 Maybe give them a special cost reduction for producing cavalry units, and encourage Mongol players to use cavalry instead of infantry or archers. Mangudai may need some buffs too, now it’s rare to see players using them in 1v1 battles.

data takes few days to show actual state, plus hasan is stuck in his own world regarding state of the game

Or alternativly vs Buildings

This would give them a very unique role. And allow you to efficiently gain bounty.

I dont know if them having early lancers back would buff them too much, maybe I am wrong though, Rus barely uses their early knights and for french it works because of the healing.

Giving mongol with early knight but remove the double production about spearman seems to make it more consistent with historical facts.
However, mongol may requires courageous reconstruction but not simply adjustment like these.

That’s acceptable, but it should not be enough.
I prefer to cancel Mongol’s double production about infantry, but give more discount about cavalry, which could encourage player to organize flexible cavalry force.

I mean Mongol is very strange now. English do has their longbowmen, and French do has their royal knights, when Mongols has spearmen and outposts?
Mongolian were swift, flexible and elite warriors on horse, medieval tactician, but never became a motley crew gathered around towers like that.

IN one hand they are strong unit.
But in Feudal, they are easily countered by spears and even arrow towers.

While they make raiding easier, they are also quite costly and holds you back quite a lot.
Tbh I don’t see the issue with double production of early knights.

Only one who would be having an issue is French, due to them unable to go early knights themselves for harassment and have to play defensively for once, against mongols.

I dont think french would have to be defensive. They still age up a bit earlier and get school of cavalry ready to go when mongol have to build a stable.

Double production helps, but early feudal I doubt mongol would be able to double produce many lancers since the stone cost for lancers is prety high, specially in feudal, more than likely they would be able get only an extra 1 or 2 lancers out of it. So french would likely still outmass in the cav department.

If anything I think early lancer could make things a bit worse to mongols in a way because now at least they still have their fc which is hard to punish due to very safe resources and they can produce age3 lancers without having to upgrade them.

good point about the age 3 lancers for “free”

I am quite frustrated that the fact that mongol get Horsemen in dark age is actually more of a disadvantage than a benefit, because you need to upgrade them 1 extra time. that is rather costly. (25f 75G).

100 resources that could have been used for aging up instead.

The fact that Scouts do a better job in Dark age aggression than Horsemen is rather sad. Since the horseman has so low damage against non-archer units. And scouts can at least heal themselves up. They both do same damage to buildings.

Am I missing something? Mongols were not nerfed in this last patch at all and likely will stay near the top once 17718 stats start coming out. Why are we talking about boosting them? If anything, giving horsemen additional pierce armor helped them more than other civs. We should probably wait a while after a patch is released to assess stats before suggesting boosts, lol.

The mongols actually got fair emount of Nerf over time. All accumulating to this patch.

While the Mongols didn’t get a direct nerf on themselves.

They got a Nerf that effects them in 3 ways.

1st: Not able to play Dark Age effectively.
Now that its easier to boost oneself into Feudal and even a faster Castle. Mongol’s cant compete. They are already Economically in a disadvantage (see BeastyQT video for more details).
But short sum:
Having to quickly evaluate and place out your TC, the time it takes to deploy, causes you to be 1 villager behind at the very beginning of the game. Which puts you in a much bigger disadvantage that seemingly, as it has a cascading effect.

2nd: Stone resources has been nerfed. Stone playing a much more strategic role now than before (Which is a good thing). But this nerf’s the Mongols. Their first Ovoo emplacement grants 300 less stone.
This means less upgrades or 3-5 less double production units.
The fact that Stone is more strategic and needed to be used for repairs of defenses. It makes it so that more players will contest for stone. Thus less stone to be able to place a Ovoo on. Making White Stupa pretty much even more Mandatory than it already is (Khaganate palace being absolute meme level trash especially now)

3rd: Siege having been revamped, turning siege far more squishier and vournarable to Cavalry.
Ironically Mongols don’t have the best Cavalry, Mangudai’s being very weak compared to other units and their cost.
You are now forced into going more into Cavalry. Where other Civ’s shine better. (Rus, French, Abbasid, Dheli, heck even english with longbow support, HRE MaA counters Lancers quite hard)
And the mongols are strongest in Infantry play, ironically. Due to much cheaper double production and ability to create front line siege.

While this is still viable and preferred strategy.
You are hardly left with any other option but to go for FC with Mongols.
Which they rather suck at in comparison to other civs. Due to exactly, the Villager start mentioned earlier.
So you will always be behind.

Thats at least the core problem of the mongols.

Instead of trying to convince people that a civ that has been at the top in win percentage since the beginning of this game is suddenly weak, why not just let the stats speak for themselves. If time goes by and they truly are struggling, than I completely agree, they should get a boost. But I sort of doubt that will be the case. Btw, if you put the tc by the ovoo, your -1 vill becomes +1 vill…

Yeah for a 120 Stone. Thats more the double the cost for a extra vill.

Not to mention it take time to get the first 120 stone.

Time itself is a very precious commodity in the early game.

I tried going for double vill production. And its not worth it by a mile.

I would consider it if they lowered the price to 75 Stone.

The Ovoo collects stone over time at a rate that automatically scales 80/100/120/150 stone per minute by Age.

That isn’t even 1 extra vill per minute with current cost.

By the time you have +5 vills. Their already in Imperial and can Print villagers cheaper and faster than anything.

The double production of military units is the only thing that allows mongols to defend themselves and be able to do aggression to prevent getting overrun.