I have played several episodes of campaigns, and enjoyed the gameplay very much, with a pretty high standard of localization. However, when it comes to names of units and technologies, the quality suddenly and disproportionately deteriorates. My educated guess is that the poor translators did their best, but they were not given enough references and context for short strings, so I think this is really a problem of localization management and lack of test playing.

Below is the list of wrong or correctable terms in Japanese I found (all confirmed on the tech tree screen). I actually reported many of them at the closed beta stage, but they were sadly not updated, including simple typos.

When a technology update is ongoing, the description shows 生産中… which means “producing…” as if it’s going to produce a unit.

For some reason, an ideographic period appears in every place a decimal point is expected (of course should be an English period).

I noticed playing in English it states “producing” as well. I was thinking it should be something like “researching”.

Great, so it’s not a “translation” bug…
The game makes me download a few gigas of contents each time I change the language so that I didn’t really test across languages.

Keep in mind the building in the game is not actually a pagoda 仏塔, but a Chinese pavilion 亭. The two terms used to be conflated in English, with any non-livable structure with the signature curved eaves was called a pagoda, whether it was a tower, a pavillion, or something else.

Barbican of the Sun: 太陽の楼門 “(literal translation of English)” → ???甕城/譙楼/城楼 (not sure)

The “Barbican of the Sun” is based on 正陽門 - Wikipedia, though from a period after the barbican had been removed and only the gates remained (hence why the in-game building is not a barbican, despite the name).

as far as what I see in the game, this is an independent defense facility rather than a wing of castle, right?

This is more of a nitpick. Ideally keeps would stay keeps (キープ) and tenshu stay tenshu (especially if Japanese make it into the game). In normal parlance, the two terms get conflated so the translation isn’t wrong. But they are merely comparable concepts, not one and the same. Much like dragons and long/ryu are both “dragons” but represent two fairly different things.

They shouldn’t have translations to other languages if they can’t get it right. I’m sure japanese people have english in school now too, so what’s the point? If I could get aoe in my language I’d still play it in english because its better to have it in same language as the rest of the community. It’s easier to talk about this way

Keep in mind the building in the game is not actually a pagoda 仏塔, but a Chinese pavilion 亭. 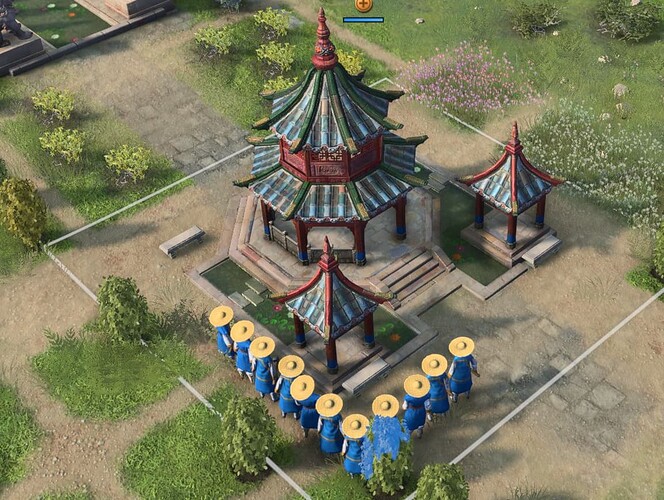 The “Barbican of the Sun” is based on 正陽門 - Wikipedia

It’ll make much more sense but are you sure that specific one? I’m not good at recognizing building for sure…

Much like dragons and long/ryu are both “dragons” but represent two fairly different things.

So “keep” only means the castle tower in English too? If that’s the case, I’m okay for it.

It’ll make much more sense but are you sure that specific one? I’m not good at recognizing building for sure…

You just need to rotate the the in-game view a little to focus on the staircase (when you build the landmark, it’s facing away from the player and not visible). You should be able to compare the two: 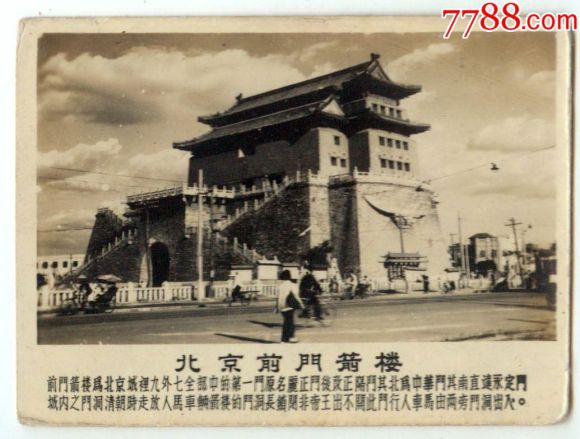 And back when it was still a barbican and not a free-standing gate (the staircase and decorations were added by a German architect who oversaw the destruction of the walls): 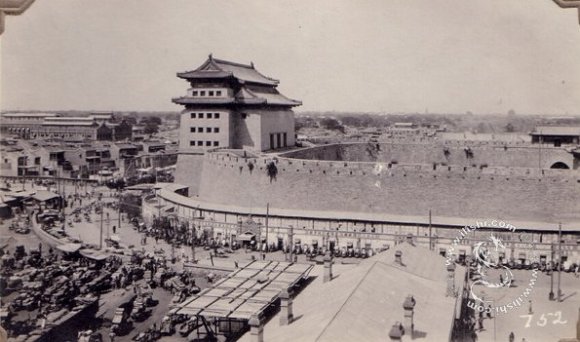 The towers on top are different, but the base is defintely that of the arrow tower in Beijing. Down to the decorations on the sides where walls used to be.

So “keep” only means the castle tower in English too? If that’s the case, I’m okay for it.

As I said, it is a bit more complicated. It usually does, but it can be a free-standing tower with no additional fortifications. It’s not really the same as tenshu, which are exclusively built inside existing castle grounds, but the two are similar enough that common translations merge the terms into one.

They shouldn’t have translations to other languages if they can’t get it right. I’m sure japanese people have english in school now too, so what’s the point?

I even wondered if it’s an extremely compressed figure of this rather than the arrow tower only. But either way, it looks strange when no real building sat on top turns the narrow side to entrances.

the two are similar enough that common translations merge the terms into one.

If so, you can’t merge because they’re different in Japanese. Japanese has one word for both crocodiles and alligators, and when you translate it into English, you can’t argue that “crocodile” is correct even when you see an alligator because sometimes “crocodile” includes “alligator”. It just sounds weird.

As I play normal games, they are always standalone. If there were some castle “keeps” appearing in campaign, they should change the translation for that case only.

It may be not translators’ fault though, because perhaps they were not given additional information of what it really looks like.

We are tracking these translations issues internally. We very much appreciate the report and the attention to detail.

I didn’t complete the campaigns but noticed that the some event name close-ups at the last of briefing movies have a wrong Japanese font. It seems that they failed to apply the localized font on those cuts, and as a result, punctuation is displayed in English font while Japanese letters fall back to the last resort font (I guess Arial Unicode MS) which has quite ugly glyph shapes for Japanese.

Below is an example of a correctly rendered title box. It rightly has a decent HeiseiHG Mincho font and correct formatting (year number parenthesized). So I anticipate that every instance that has the English year format would be styled wrong.

The Mongolian title “khan” is spelled ハーン for Genghis Khan but カーン for Batu Khan. Moreover they are both ハーン in the subtitle shown at the same scene.

Usually, the advanced version of Mongolian techs is suffixed with (改) in Japanese, but the leftmost two in siege workshop i.e. roller shutter trigger & adjustable crossbar have (改良). I don’t see any grammatical reason to change them so they should simply be inconsistencies. 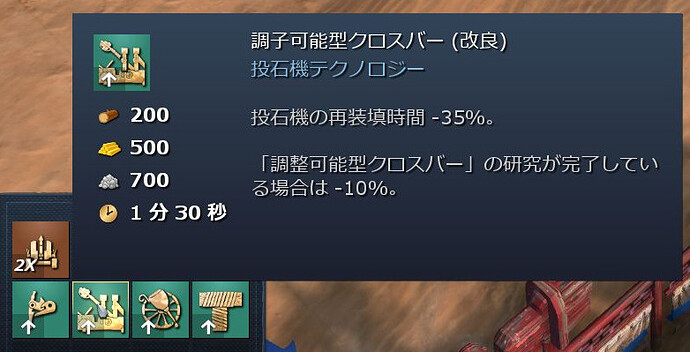 This is something I overlooked in the top post, but the Monastic Shrines tech has weird name and description. The name, 修道所 (神殿), literally means “Monastery (Temple)” which is hard to understand what it is. The description can be translated “Monastery will improve productivity of the area without Ovoo.” but Mongol apparently doesn’t have a building called “Monastery” unlike other civs.

Very good post! I hope the developers see this and make adjustments.