Knowing how to do build orders doesn't make one bad at the game!

To all those people who are hating on those superior players that know a build order. KNOWING HOW TO DO BUILD ORDERS doesn’t make you bad. Now I know that you will say it’s moot on Nomad but that is just wrong. So next time you try to justify the garbage map of Nomad, don’t use build orders as an excuse to vote for the fringe map. Have a great day!

What are you even talking about

I have no idea what this thread is meant to say.

He’s saying that knowing a build order and getting good at the game through it yet being thrown into nomad where the start is much different /it’s a different game-mode than regular ranked and the build order is hurt very badly and without a nomad build order learned specifically people will assume he’s just a bad player when he plays nomad - yet when playing normal ranked -non nomad - non mega random - where he actually practices and learns the game from the regular start game-play he does well because that’s what he practices. Nomad and mega random should be put in a separate ranked queue. / that’s what he’s saying

i dont get why it is so hard for some people

Because most people like predictability of routines.
Until they don’t and then they find everything stale.
Surprise surprise!

If you mean they complain but refuse to play something else than the “regular” maps for the Nth time, I agree.

Alright then, i will take your opinion into account.

You know, it’s actually funny that AOE2 community is the only community where the casual player makes fun of the “tryharder’s” for trying to learn efficient and effective ways to play it. It happens a lot in this forum as well.

I’m very bad a hibrid maps like nomad because I don’t know any hibrid build orders. I do like "nomad"s maps tho like Africans clearing and land nomad.

Yes This, this right here…

The Virgin pro player, vs the Chad casual

The casual player knows he/she will never be pro and accepts it, plays and has fun his/her own way.
The tryhard learns all the build orders, all the game tricks and still fails at becoming a pro, sure his rank in the leaderboards is higher or even much higher than the casual gamer, but still nothing compared to real pros.
This leads him/her to accumulate frustration which often results in opening complaining threads on forums (this OP! nerf that!), along with teammate blaming in team games (that noob pocket! that useless flank!) and calling others noob because they can’t fast castle in under 15 mins or respond adequately to a scout rush.
Also, the tryhard is entitled to give lectures about anything regarding the game, because is obviously much better than the casual player.
Too bad the casual player doesn’t give a s**t about it, and will still fatslob his way to victory on BF.

(I generalized a lot, obviously)

The main issue seems to be that player are encouraged to learn build orders to understand the game. I highly disagree with that opinion. I wont deny build orders are usefull. But if you just learn build orders to execute them without knowing why they work, you look like a monkey. You have learnt a trick and you copy it, since you know that after finishing the trick you will get an banana. 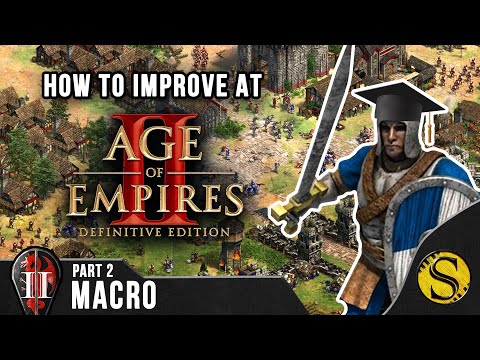 This is by far the best starting guide i have seen. Like i said: build orders are part of this serie, but it is part of part 3. That is for a reason: You first need a good fundament. That fundament allows you to more easily adapt. This fundament will also makes playing maps like Nomad much more fun. You might not know that build orders, but you do know the background and you can much more easily adapt. If you start with just learning the tricks first and afterwards you try to learn why the trick will work, then it is much harder to adapt.

I’ve always looked at it as build orders are there to get you started and doing the basics right. You are much better off having good macro through build orders at low levels than to have good micro people can improve much faster at this game by getting the build orders learned off so they can use less mental energy/ focus on other things better. I barely improved at the game at all was playing for three or four years at campaigns intermittently. Only by learning build orders did I improve very fast. Also to the other guy I think casuals have fun just playing the game. The tryhards do have fun we just progressively improve And enjoy this incremental improvement a lot it’s actually more fun the better you get because you are impressing yourself and really digging deep to get a win. If I put zero effort into something it doesn’t feel as rewarding when I win. I do get mad at others play on my team but only when they are ranked as a 2400 but play like a 2200 it’s all about my expectations of the player. It is not about trying to be a pro or imitating someone else for me it is about improving cos that in itself is a fun challenge. Seems wierd to me that people criticize players that try to win in a game where the end goal is to win. Fun is the journey and winning is more fun on top

I’ve never gone bowling for instance and said I’m gonna ■■■■ up every bowl just for the fun of it.

At least this is my opinion

This leads him/her to accumulate frustration which often results in opening complaining threads on forums (this OP! nerf that!), along with teammate blaming in team games (that noob pocket! that useless flank!) and calling others noob because they can’t fast castle in under 15 mins or respond adequately to a scout rush.
Also, the tryhard is entitled to give lectures about anything regarding the game, because is obviously much better than the casual player.

Damn that was edgy

My point was exeacly about posts like your lol. It’s amazing how the aoe2 community is the only community where the casual believes he is morally superior to the tryhard.

This is why I find the current meta is hell boring and need a change.

Jokes aside, I really respect you and all players and don’t take this personally, but I hate the current meta thats it.

Note: I hate nomad too, and I always ban it.