We are currently aware that there are some performance issues which cause the game’s FPS to drop when played on higher-end monitors or machines. We are continuing to research this issue.

Please try our Game Optimization Tips as well as the steps under this Support FAQ article as the first-steps in troubleshooting, before consolidating reports on this thread.

Thanks for looking into this issue. I am very high-end on a i9-9900k CPU and a NVIDIA 2080ti GPU along with a 144Hz monitor. I experience major frame rate drops even with this. Just to give you guys something to work with. Thanks again.

The game crashes a lot and steam also gets closed. No report or anything just back to desktop. Hopefully it will fixed soon.

I had TERRIBLE performance, the game would idle at 30ish FPS even on main menu or in a 1V1 single-player match on a Tiny map size. For normal games and campign games it would often idles at 20ish FPS - very odd for a 2D isometric game that uses sprites for graphics.

I found out, for me at least, the issue surrounded the v-sync, I turn it off to get GREATLY improved FPS however it also means that I cannot cap my frame-rate which I always like to do at 60FPS.

I have a problem while scrolling, it stutters, it’s not smooth

I found out, for me at least, the issue surrounded the v-sync, I turn it off to get GREATLY improved FPS however it also means that I cannot cap my frame-rate which I always like to do at 60FPS.

Use RTSS for limiting FPS.

I play only on classic texture pack and game is slow. Low FPS, fps drops, shuttering while moving camera on map, when scrolling and other. When is on monitor are more objects - fps down to 25fps only. Ram on GPU is istantly full immediately. Then CPU ram is full too, becouse sharing memory with GPU. And than pc go to swaping - page file. This isnt normal for game like this. This game have not graphics for theese behaviour.

Please work on that. Optimalization is biggest problem of this game!

I’m currently experiencing some constant freezes. They occur approx every 15 seconds and last between 2 to 5 seconds each, which obviously makes the game unplayable in online mode

What I’ve tried so far:

I participated in the beta testing program and it did not happen there.

Please fix vsync issues, it is very much broken. 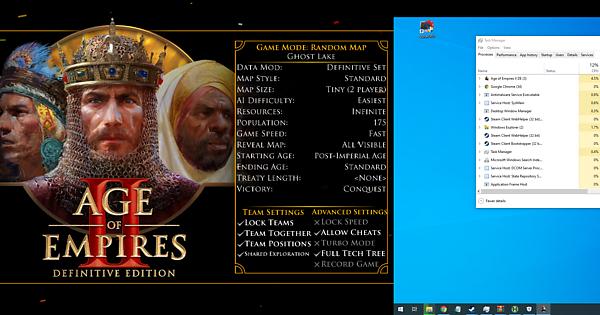 For me I am noticing that the game is very dark as of the release of the game. I have tried all sorts of different setting changes but no matter what everything is just a little too dark. It is almost impossible to differentiate a boar from a tree and generally makes it hard to notice things like the boar in explored area.

I want to know how in the world a game this simple uses 8gigs or more of RAM while playing, makes zero sense. 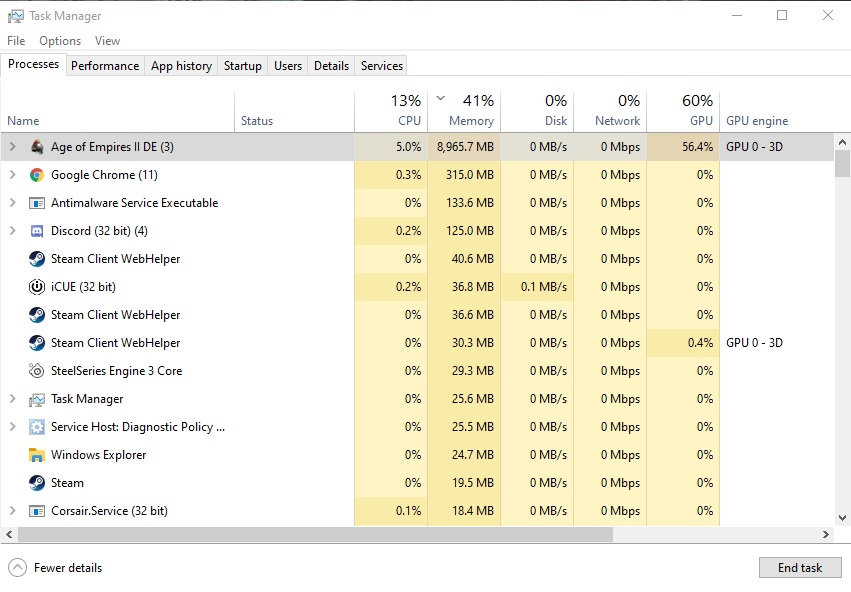 The game is almost maxing out your RAM, which is a problem, I also have very high RAM usage but thankfully have enough it doesnt max it out.

Hope to see updates soon to this, I can run game 100 FPS+ but its not quite what I expected to my hardware. Its still playable.

RAM 8gb DDR3
CPU: AMD fx 8350
GPU: gtx960
monitor: 144hz 2k
massive performance issues for me with frames dropping, vsync on or off. I was a beta tester since beginning of october. I tried almost every build, especially toward the end of the testing phase. I constantly reported the issues in the surveys but they still exist in the release version.

So i updated windows used DDU to install new drivers and before i downloaded the UHD graphics pack, my system was get 18-22fps in the benchmark and in game via standard game test 100fps. Changing settings before the benchmark from low to ultra made 0 difference.

After the UHD pack benchmark doesnt work and sometimes even causes steam to crash. Standard game fps is the same. The game also stutters massively during the loading screen.

I did alot that updating and it didnt help. I also verified the game files.

Game stops working randomly… Just a little screen appears that says AOE 2 has stopped working sending information. Crashes almost immediatly while runing benchmark. Has a lot of stutter while in loading screen! This game should not be this intensive swallows all of my 8 gigs of ram and then starts using from the page file.

I also experienced the same problem when playing Multiplayer FPS very drop, Nvidia 940Mx, core i5 7200u. I hope this problem can be resolved.

I play on a i9 9900k with a RTX2080 and game Installed on a SSD. With UHD turned off I get 150+ FPS with world pop under a couple hundred. With UHD on game begins to drop frames very quickly. Also I’ve noticed played multiplayer while still getting 150+FPS, game will still stutter and feel laggy, noticed it’s when playing against others with poor ping.