What’s going on with the unranked lobbies at the moment? There are so few games and so many players that its difficult to get a game. Lots of people are complaining that they set up their own lobbies but no-one ever joins, and I’m experiencing this too. It’s as if only a certain number of lobbies are available at any given time.

Please look into this!

Hi @Dalemac1989, Are you referring to Age of Empires II: Definitive Edition or another Age game?

Yes, sorry, this should l have been in the age 2 forums. Not sure how this happened!

I’m experiencing the same issue. Most remarkably, I currently only encounter Regicide games in the lobby browser, even though I didn’t filter for such a thing.

On aoe2.net, people have been discussing this issue in the chat there. Essentially, about 10-20% of lobbies show in the browser at any given time. Seems to be nothing to do with filters for the most part. Nothing to do with time of lobby hosted or any setting. I did however notice all of my lobbies are listed as western Europe, though Im sure some arent hosted in it. However hosting on the western europe server yields no luck for me or others that have tried.

it makes getting unranked games next to impossible, if you can just keep rehosting non stop all evening and still not have your lobby show in the browser at all.

Most of the time I can only see the westeurope lobbies.
Which is odd because I’m in the UK.
People can invite me into them, they just don’t show.
I’m on the latest update and on windows 10

Same problem for me and I and many others have had this problem for a week or so without any responses from the AoE team so don’t expect anything.
Even if you think you can only see West Europe, you still can only see like 1/4th of the actual lobbies. Most lobbies are hidden and can only be joined through invites, steam and aoe.net it’s completely broken and unplayable.

I forgot that you can use aoe2.net to join lobbies.

Thanks for that! Thanks also to the guy who made it for fixing the broken lobby system!

This has gone on since a few weeks : part of the lobbies just don’t show up in the unranked lobbies. It has proven to be incredibly frustrating to try and set up lobbies to play with friends or other random players, only to either wait for ages and noone comes, or for your friend to say that your lobby doesn’t show up.

What’s more is that all lobbies are picked up by aoe2.net, and you can join them from there. At the time of making this post, there were about 200 lobbies up (with only 16-17 visible in game), and half of those were filled with only one player (the host).

So you’re either stuck to hoping the game mode you want to play shows up and hope for a spot, or play with your friends, who aren’t always connected/numerous enough for full lobby games.

For a week now,
Every time I try to create a lobby it is not visible by any other player.

I wrote on Xbox, and Steam support, not answer.

Many other players have the same issue.

When are you going to fix this?

Can’t find my friends steam-lobby and neither can he finds mine.

Buy the Game in steam and a second time in your store an try to play together. Sounds so simple, but it seems not for MS…

Hi @TheChicken6198, If you copy the Game I.D. in your lobby and send it via private message to your friends, are they able to find your lobby that way?

No, there is no way to find a steam game or from the other side to find my lobby. Invitations via stam/xbox live, unique lobbynames, game id, and so on. We tryed everything.

Having same issue with my friend, I have Xbox live version, he has steam…

I recently installed AoE 2 DE on Steam. Currently running the latest version. For some reason my public lobby is almost completely empty (the odd game pops up for a second). I can see matches in Spectator, so I know there should be a vibrant lobby. I can also join private matches if they’re hosted by a friend and I get a steam invite.

I tried running Aoe2.net launcher for AoE2 DE to see lobby games. Great I know there’s matches … but I get this error when I try to join: 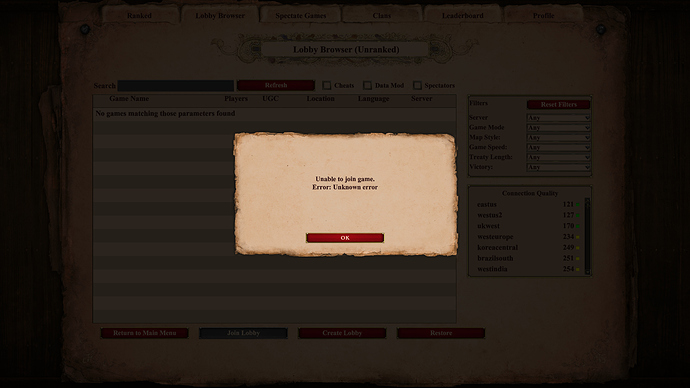 I tried this as a workaround. Any ideas as to what might be going on? I’ve had the issue for about 2 days consistently now since having installed the game. Internet speed / network all very healthy.

Thought it was just me over here in Australia but seems its across the world. Please Please Please AOE2 come up with a fix. Im tired of playing vs AI only. Cheers

Hi there. If there is still trouble joining lobbies, please try the steps in our help section.

I hope that this helps! If there is still trouble, then it would be very helpful to get a screenshot of what the lobby page looks like while connecting in game directly.

My friend group also had the awful “games not visible in lobby” bug pop back up after the last patch. We hadn’t seen this bug since before the patch prior to the latest one.

Thanks for the information on when it started happening. I’ll pass that along.

Has your friend been able to see lobbies after trying the troubleshooting steps from my last post?