Here’s another rework proposal that will probably never see the light of day. This is a concept to make Lakota more thematically accurate, and give them some more options. The aim is to give them another way to boom and some more options for late game or treaty players, while also keeping their supremacy/early game relatively unchanged.

Prairie - (400w)
Building that will generate Bison over time. Also has turnips(berries) that can be gathered infinitely. 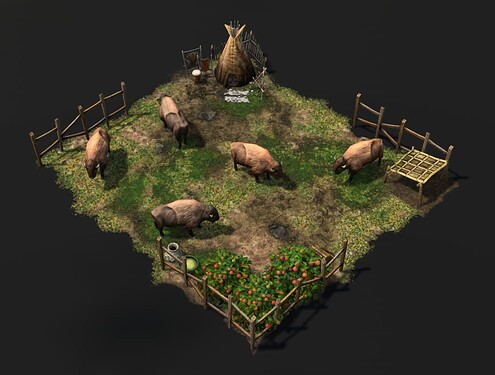 Upon being built, the Prairie will start training bison in batches of 3, with a queue time of 180 seconds. The bison will stay within the boundaries of the Prairie, and cannot be hunted by enemies/allies or lured by shrines. The Prairie has a maximum of 12 bison that can be active at a time. The Prairie has a build limit of 4.

Villagers can also be tasked to the Prairie itself to gather from infinite Turnip plants(Berry bush, but 10% slower, can be boosted by Berry gathering upgrades)

High Value Furs(IV) - From now on, you receive 100c deposited directly into your stockpile upon killing a hunted animal, and gathering from hunts also provides a fraction of income as coin.

Timpsila Harvest(IV) - Gathering from Turnip bushes on Prairies will also generate a lesser amount of wood.

Not every day i see a mention of Prairie Turnips outside of obscure gardening forums.

I actually think this concept is really well thought out, just 2 things I would consider:

The farm techs in their current state buff the gather rates of hunts and berries. Removing them would change the ultimate gather rates of hunts. Currently I do think they are slightly too high (nearly 2 food per second potentially) but at the very least I think an age 5 tech for rates would be necessary.

A build limit would have to be determined most likely. It would slow their transition to “farms” even more than usual so there is some need to determine if bison would spawn in instantly like a british villager, or if they require a delay. This could give great value to the “2 farms” shipment.

Great idea, really like it. Balance would need to be looked at like the rate they spawn and stuff but in theory it seems great, it’d certainly make me play lakota more.

I had a similar idea, but with mines. Giving a purpose to the mines that makes sense of the plot. Possible New plot solution on obtaining Lakota and Haudenosaunee coins

I’m glad you think so! Thanks for the input!

Honestly gotta say, in my 8+ years of playing this game I’ve never known that farm upgrades boost ALL food gathering haha! That’s insane. But I was thinking that too, definitely will need an imperial hunting tech, and I was trying to figure out how team farming cards would affect them.

And yeah definitely about the build limit and spawn times, it could end up like another land grab+hacienda situation where you would just spam them and end up with an insanely fast boom, that’s why I conceptualized it like a dojo - you build it and have to wait for the Bison to arrive, so I added in the prairie turnips - A slow food source to gather from while waiting for your first batch of bison, with the option of sending a card that enables bison to insta spawn upon building. Either that or the Lakota player has to transition, and their food econ basically grinds to a halt while having to wait for the bison

But when I think of concepts I do try to lean more towards the heavy handed side - always better for something to be released too weak than too strong imo!

I am thinking, doesn’t this kinda work against the infinite bison cards that Lokota has?

I am thinking instead of it just spawning bison, it could be more like the African Granaries where it attracts hunts in the early game and then bison spawn can be unlocked later

to prevent a fast boom, another idea could be to do what mongols in aoe 4 do and have a maximum spawn amount, though i dont know how it would work on hunts.

Its a great idea, they would get the farm upgrades there. About cards I dont think they need to get more food per animal, they get that effect through hunting cards that are a must for them.

About wood/coin, I would keep states also getting a trickle while hunting (not too much) while hunting. For wood I would change 15 bisons for 1000 wood as incas and indians have, a bit lesser than them cause they need less wood (also a bit more cost for teepes).

This is a really nice rework idea! Devs! Please see this!

this rework would be amazing. But aside from these, they need to change some mechanics on Lakota such as explorer 1 shooting artilleries which is completely broken because the warchief comes out of community plaza for free and is super tanky since it’s cavalry and of course really fast (which he should be), and give them a proper anti artillery unit. Rifle Riders have massive multi vs artillery but they get countered by ranged cav, skirm type, musk type, mele infantry so basically using them vs artillery is not ideal at all since they are expensive as well. a rework on cetan bow would be really nice as well since their attack animation is really awful. 1.5 rate of fire but feels like 3 rate of fire. Teepee limit should be reduced to 15, from 20. #Makelakotagreat

Its not free, lakota needs villagers dancing to rescue him, villagers that dont gather resources.

This would be so cool! It might make more sense to call it a Buffalo Pound but i’m not sure if fencing in bison was ever a hunting strategy used by the Lakota,

I think it is historically correct:

The corral or impound method involved building a timber corral and enticing the buffalo into it so that they could be killed.

To make the impound, a thicket was first selected and an area 30-40 feet in diameter was cleared. A wall about 10-15 feet high was then constructed around the clearing. The entrance to the impound was placed to the east and two sturdy trees located about 20 feet apart were used as the entrance gates. A log was then lashed between the two trees at the height of the wall and a ramp constructed from the ground to this log.

At an oblique angle to the entrance of the impound, a chute was built to guide the buffalo. The chute was about 100 yards out and made a sharp turn right before the entrance. With the sharp turn, the buffalo herd would not see the corral until it was too late to stop. Buffalo Hunting Among Northern Plains Indians Prior to the Horse | Native American Netroots

But apparently it was a method used before they used horses.

I agree with your name, prairie is a natural feature, not a building. Buffalo Pound actually describes using/modify the terrain for hunting. It could also do without the infinite berries.

Haha I actually agree with this too, the initial name I thought of was “Hunting Ground” but the reason I went with Prairie is just for simplicity, as other econ buildings have simple names like “Mill” “Farm” “Estate”.

As for the berries, the idea behind that is to help the transition from natural hunts a bit easier, when the player first builds a Prairie, the concept is that they would have to wait for the initial buffalo to spawn, so the berries make that transition a bit smoother for the Lakota player. Of course, you could go the Manor House route and give them some free bison upon being built, but I think keeping the time investment is important, as the player is getting essentially free and safe hunts, where other civs have slow food gathering from Farms/Mills until they spend resources to upgrade them.

Have you thought of any proposals to make sense of Lakota and Haudenosaunee “mining”?

They are on the community plaza anyways during the fight so it doesn’t matter.

If you are talking about treaty…they have the weakest economy, they are far from being OP

they gather their infinite bison at nearly 2 food per second and their 2 primary units (axe and wakina) are almost pure food, they do just fine in treaty. I played lakota/sioux in an ffa tournament last year vs a brit player for 5 hours and i was down from his res total by only a few thousand–with over 1 million res each. That infinite bison eco is no joke and that’s with 25 vills on the firepit the whole time