Last time i said that the Gpu usage was high on the main menu and that the lobby one was lower due to the interactable particle systems (that i suggested making optional) but apparently (or not entirely), that is not the case. I went from (i said lobby was 60% in the previous topic but it was really 30%), 30% to 70% in the lobby due to this new patch, don’t know what is the issue and doesn’t matter the number of active lobbies.
-When i am inside the lobby, the gpu goes down to 15%. and i can browse the lobbies, while being inside the lobby, still around that %
-The main menu is still taking me 99% gpu for unknown reasons.
-In comparison, one game 4 vs 4, cba so a lot of units, multiplayer takes around 50%

Nice catch. I wondered why my laptop fan increased speed due to high temperature when I had alt-tabbed out of DE main menu. Seems, that I should leave DE at other screens than main menu when I am going to alt-tab out.

RoomOfTheEvil,
I am having the same exact issue

When idling at the main menu the gpu usage of AoE2DE skyrockets to 95% or more. 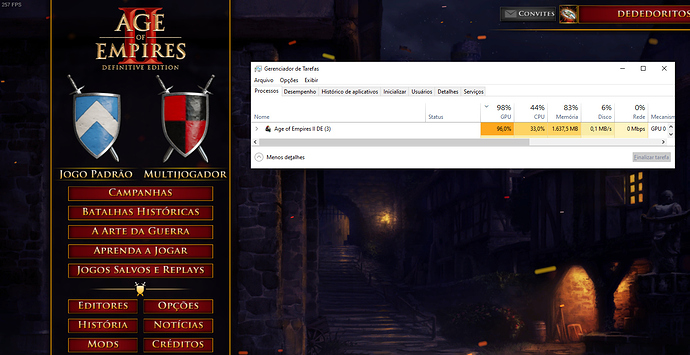 The usage drops down to about 50% when at other menus such as the singleplayer lobby or the multiplayer browser. Not as concerning, but pretty high usage, still. 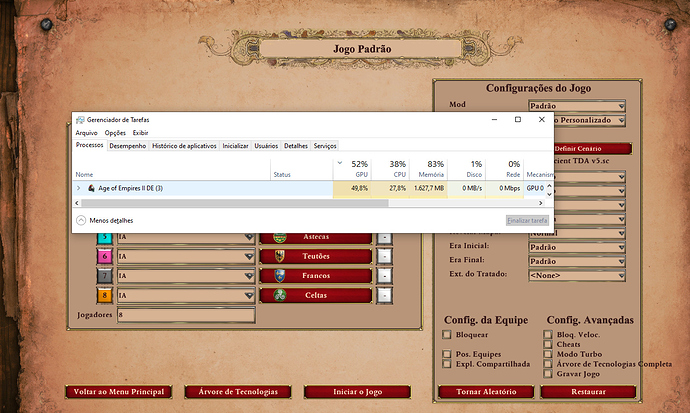 I don’t get it… My computer may be a toaster when compared to yours, yet here we are. I’m running the game at the lowest settings, with 1366x769 resolution, in case you are wondering. A horrendous optimization problem, i guess.

The CPU consumption is not the problem, that is fine. The GPU usage is what goes wild. The ingame usages are just fine as well. Very weird.

Oh and I play on the same resolution setting as yours, by the way.

Eita, pardon me and my dumb reading skills. I get only 55% on main screen with my GPU tho - this i would give to my lowest settings and low resolution. This and the fact fact my anti aliasing is off problably gives the reduced usage.
I increased the settings to “high” and now it hits 60%. hmmm… with an 940mx…
Edit: i have no fckn clue what could be the problem anymore

Well, it could be due to some graphic setting, but still make no sense. All that is to the game to process at the main menu are some PNGs, SFXs and a background music. I simply can’t see how any of that could get to almost full usage of GPU, regardless of any graphical setting.

Oh and there’s little amber particles that float around. Could it be the ambers…?

I saw some discussions in the forum of people wanting to mod then, or disable, or something, idk. I don’t have links for you, tho.
It’s either these particles or a forgotten problem dating from some patches ago when they tried to optimize the game better. Probably the latter.

I am also experiencing this issue, but for me, it occurs after ive finished an online custom match and return back to the main menu.

so, this has been happening since the beta, and it doesn’t seem like a bug, but it is still something that i believe shouldn’t be happening. what is so compute heavy about a menu that the waiting queue uses this many resources? not even in game i see this gpu usage. the main menu is also like this, and i don’t get it. i noticed this because of how i setup my fans, and they go very fast when in the menus and calm down again when the game starts. is there any reason why the menus take so much? 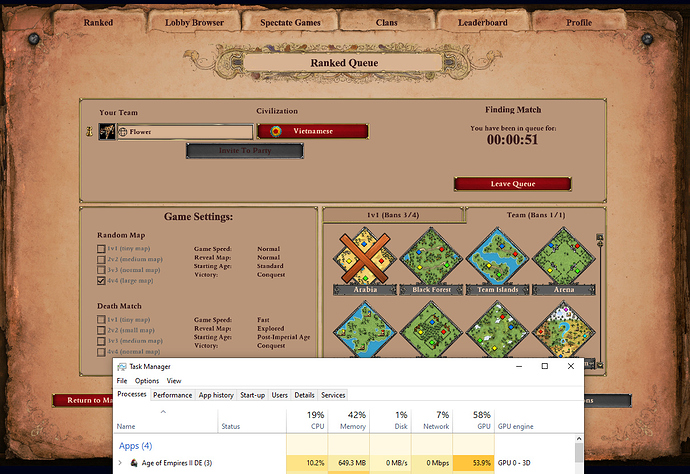 well, my post was moved here, burying under new post so no one sees it, so this reply is to put it up there again!

This issue has been already reported:

Game Version: Build (####): Latest Platform (Steam or Microsoft Store): Steam Issue: Last time i said that the Gpu usage was high on the main menu and that the lobby one was lower due to the interactable particle systems (that i suggested making optional) but apparently (or not entirely), that is not the case. I went from (i said lobby was 60% in the previous topic but it was really 30%), 30% to 70% in the lobby due to this new patch, don’t know what is the issue and doesn’t matter the number …

70% GPU usage for a couple of falling tree leaves at 120 FPS is really unreasonable.
45% at 40 FPS, so even limiting is not a solution.
And by default there is no cap at all so it uses GPU resources as the CPU is able to feed.

GTX 1080 - I’m on 70% GPU on the menu and lobby before I try do any game play - as soon as I enter a game (even as a viewer, or replaying a game) I go to 100% GPU and it never recovers after that. I’ve had several instances of the computer just dying and restarting (I have a high spec’d watercooled custom build which never had a system stability issue before latest patch). I’m also getting the black screen problem if the computer doesn’t die. And also I have to use a VPN to me getting disconnected on 5 mins, to boot.

I really love this game - been playing it since 1999 - this is the best version yet (feature wise it’s awesome). It’s just so bloody annoying I haven’t been able to play it properly since February (and February was getting around problems by using a VPN).

It’s because framerate is unlimited at these menus, can easily go up to 500 FPS. Devs are aware of that and it’s been hinted that a fix will come on next update.

In the meantinme you can either use 3rd party FPS lock software or avoid these menus at all costs!

I guarantee you this is 100% the cause of the particles (embers). Even in beta the main menu and loading screens caused abnormal delay for me. If you have ever programmed and worked with particles (I have) you know they are gpu hogging madness that should be used very sparsely if at all.

Looks over functionality/playability in this game, inexperienced coders/devs is what’s causing all the issues in DE.

I’ve re-bumped this issue since it is still happening in Update 36202. Thanks for all of the information, everyone!

Hi, I have the same problem here, with GPU usage at up to 99% on the main menu, even if tabbed out. I have a NVIDIA Geforce GTX 1060 and I can run the game at reasonably high setting otherwise with no problem whatsoever.
Does anyone know if this is being looked into?

idk if it is being looked into, but i made a makeshift solution for myself. i found a program called rivatuner statistics server which allows me to cap the aoe2de game to only 15FPS, and i use that during the main menu, which drops the gpu usage from 100% to 20-30%. And i set up an Autohotkey script that allows me to switch the fps from 15 fps to 45 fps when my game starts (or any fps number you want, i chose 45 since thats the max my game can be usually)

It’s a very complicated solution but better to use that than to wait for the devs to fix.