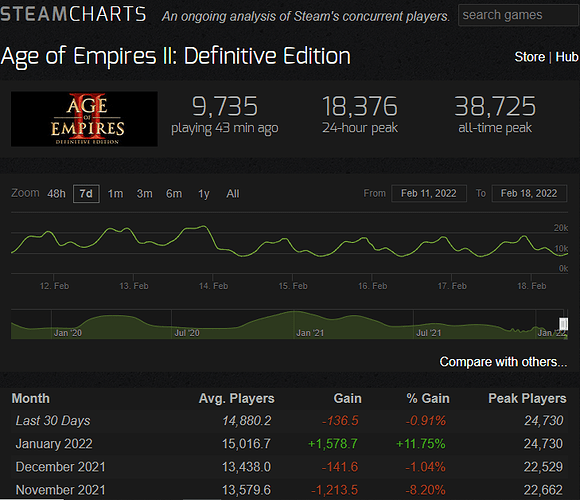 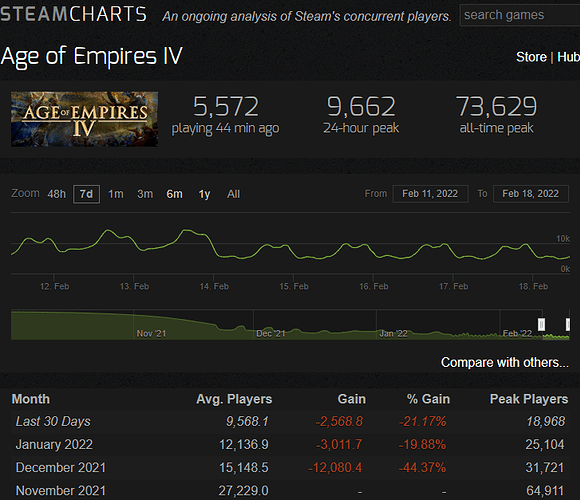 The first of which LAN so you can easily imagine it’s another 100k for production, tickets, hotels, equipment, everything.

What are we doing here exactly, waiting for AoE4 to start competing with AoE2 again? Because at this point it’s more likely we are going to be comparing its numbers to AoE3 in a year.

To be honest, I’m fairly happy with that. AoE2 has always been the best in the series, and if AoE4 doesn’t do so great, then so be it. And if AoE4 brings new people, who then switch to AoE2? Well, that’s even better.

Not sure if this post have anything towards AOE2 tbh (It is pointed to AOE4 imo, which should land on AOE4 discussion? like is there anything to be changed for AOE2?)

To AoE II, You should add users on HD and Voobly. 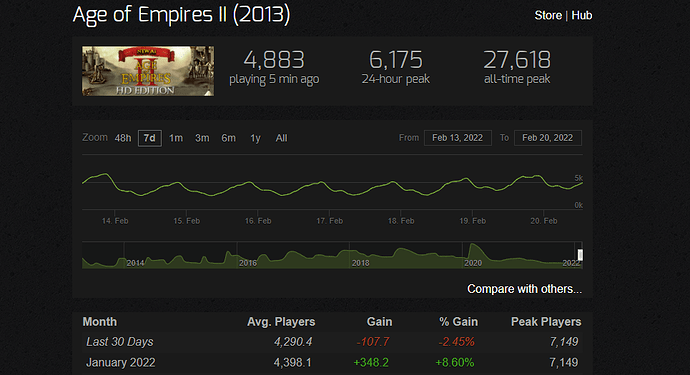 Imo they made just several fatal mistakes with age4.
The biggest maybe, that it is even more macro demanding and micro is very limited. Age 2 is already one of the most macro intensive games, but at least it offers revarding micro.
I would have wished that you could focus more on actual military stuff on age iv, instead you strategize with builds and bonusses and the technical execution of them. Which makes it even worse that you often don’t even really know in what situation you are in, as the game is way to complex to read from sheer scouting. At the same tame the interface doesn’t even shows you more information than in age2.

I don’t understand this stuff. If they wanted to produce a rts for more “casual” play, why they make it so forcingly depending on strategy and macro? You don’t even have a choice, you need to make use of the different bonusses of the civs.

Idk if ageIV can be saved now cause it’s the concept of the design that is in its way. RTS was going down because of the too high non-fighting related complexity. And they bring out the maybe most complex strategic game ever, with very limited micro potential.It feels even battles are more macro than micro in age IV.

aoe2 is just a better game. you have clear control of each individual of your unit and that is very important in RTS. very clear graphics able to tell right away whats going on. this is also one of the reason BW and remaster is still going (among other reasons too).

game nowadays always about balance this balance that in hopes they dont lose player base or upset player base. where as games from back in the old days maybe only update once in every few years, they let players and community figure it out, and adapt, find workarounds themselves and thats how a game should be played.

doest really matter… AOE 4 still has a chance… Remember R6 siege having less than 1k players and now have more than 170k ? … AOE 4 had a great launch and now only competitive ones remain, people like me who just want to play singleplayer contents like campaign, scenarios stick with AOE 2 because modders adding a lot to the game, AOE 4 can actually blow up when they add new DLC and modding tools

And that’s why I won’t understand… giving, what, 20k for wandering warriors and no S tier tourney in sight for AoE2 and at the same time giving 300k for AoE4 tourneys? Come on.

The people who play AoE4 don’t even watch content, especially tournaments on twitch.

Also from what I have seen, AoE3 has a lot more strategic layers and diversity than AoE4 (saying it after playing AoE3 for a few years).

The cards system, for the flaws it has, gave AoE3 the less-micro-more-macro focus, but now that macro focus is taken from AoE4, instead giving way to absurd bonuses like 50% cheaper villagers or all units produce twice as fast.

i think one should acknowledge that this data is incomplete:
For aoe2 one should probably add the numbers from HD edition
and for both xbox/gamepass users need to be added.

I suspect that many who wanted to buy aoe4 bought the gamepass, since that was/is way cheaper than buying the full game

regardless, while I also prefer aoe2, i hope all age of empires games do well because the better the franchise does the more people will be drawn in to play any of the games and the more investment the games will get from microsoft and sponsors

I suspect that many who wanted to buy aoe4 bought the gamepass, since that was/is way cheaper than buying the full game

Those are extremely casual players who play campaigns on the weekend, like in AoE2. Sure, 33% of players on AoE2 are from MS Store. But how often do you see in ranked an Xbox icon? Maybe 5% of players.

are you assuming that aoe2 would have higher price pools if aoe4 had smaller ones? From my experience this is not how it works. the aoe4 team probably had a budget for tournaments which was agreed upon almost independently from aoe4.

are you assuming that aoe2 would have higher price pools if aoe4 had smaller ones?

Yes, that is exactly what happens, and Nili has said it multiple times, as the person who decides which tourney gets how much, for both AoE2 and AoE4. The money isn’t infinite for either, and Microsoft only has so much to invest in the franchise.

no S tier tourney in sight for AoE2

What are you talking about, there’s a S-tier tournament happening soon for Rage Forest community, then Battle of Africa and by end of year King of the Desert 5 (hopefully), from just Memb alone.

I’m sure T90 would want to hold a Hidden Cup at some point again, too.

We should all be worried for N4C though, because I’m not sure what it’ll spell for all the sponsors should that fail. Would it spell disaster for all Age games, or just Age 4?

I don’t see a pricepool higher than 20k, all going to the winner, like with the previous formats.

We have to wait and see, yeah, though TG tournaments don’t generate the biggest amount of hype and such.

King of the Desert 5 (hopefully)

Eh, considering how BoA was delayed, I wouldn’t be surprised if KotD5 was in 2023.

I’m sure T90 would want to hold a Hidden Cup at some point again, too.

Yeah, hopefully. Though Nili didn’t do a NAC4.

Yes, that is exactly what happens, and Nili has said it multiple times

Nili has said the exact opposite: that him doing N4C does not mean less money going to aoe2 tournaments

Aoe4 perished before anyone could predict, throwing big sums of money is just a desperation move, right now the biggest competition to aoe4 is aoe2 HD.

Since this is a microsoft forum, you should also take into consideration aoe4 and halo infinite and obviously the biggest complains about this game, the 3 games share something in common and that is the Match Making with forced settings with minimal to not freedom to choose what to play, in their own forums that is one of the biggest complains, the only reason why we are still on float is due aoe2 having a 22 year old community, but what is also affecting the other games is restricting aoe2 growth.

What do you mean by the biggest competition is AoE2 HD? Do you mean like the most comparable numbers?

Yes
20 characters are all my heart desires

Yes to what? If you mean my most recent comment, which option?

And Gameranger too (20 characters)