I am of the view there should be two buffs:

i think this is too big. bulgarians specifically lack paladin because of their boost, and you are giving magyar paladins one for free, on top of affecting their discounted scout, and their absolutely amazing huszar…

maybe make it scouts only? then there will be a reason for hussars over huszars (situationally but still)

Just keep in mind that that will push them towards laming. Not necessarily a bad thing, but kind of a controversial topic.

Just keep in mind that that will push them towards laming.

doesnt this apply already to the mongols and their superior hunt + scout LOS then if it were true?

But that would push their scout rush even more, wouldnt it?

thats true as well… it means a magyar could theoretically rush scouts stronger/sooner in the right conditions… so it might situationally be a snow ball problem, so they might need a buff that doesnt directly impact scouts? others have recommended cheaper archery ranges… or something along those lines

Just keep in mind that that will push them towards laming. Not necessarily a bad thing, but kind of a controversial topic.

you mean like new arabia where you have people who are complaining because games are ending too fast?

I would have to do the math / run tests but my guess is that it would bring them to around the level of Lithuanian with a relic or two / Teuton Paladins. I would also guess that they would still be worse than the Berbers knight rush

The reason I think it should apply beyond scouts is that they are really only relevant in Feudal Age and Late Imperial where the Magyars don’t need much help. I just think when I play as the Magyars / play against them, the scout rush is so easy to counter with a couple spears that helping it without significant changes to quick walling is a bit pointless. You could give them some sort of archer buff to pair with the scout rush but I’m a bit loathe to see more archers on the field as it is

I hear your concern though so would need to monitored to make sure it’s not too oppressive if it ever got implemented. My guess is that it would make them a Teuton level civ though trading infantry and siege for good archer range

it would give them an incredibly powerful imperial age with FU buffed paladins, as well as FU buffed CA… i dont think there is any civ like that atm? either one or the other is buffed and FU…? that was my concern.

it would give them an incredibly powerful imperial age with FU buffed paladins, as well as FU buffed CA… i dont think there is any civ like that atm? either one or the other is buffed and FU…? that was my concern.

Yep I hear you - how about extending the scout savings bonus to the Magyar Huszars? You would still use the scouts in the Feudal Age if you want to rush but in the Castle Age you would get cheaper Huszars where the food cost matters the most. You would still have to research the Corvinian Army to remove the gold cost and they would still be practically limited by Castle production in early / mid Castle Age until you get a second Castle up

Yep I hear you - how about extending the scout savings bonus to the Magyar Huszars?

i stand to be corrected but its already built in, theoretically for what you’re getting a huszar should cost more, but instead of making it cost more and have the scout discount apply to it they just made it cost less allowing the scout to be managed independently… but of course i could be wrong , and its just coincidental that the magyar is literally one of the most cost efficient for stats units in the game

this also doesnt help them in the early game, where if they cant scout rush they are at their weakest sicne they already have an amazing late game

so they might need a buff that doesnt directly impact scouts? others have recommended cheaper archery ranges… or something along those lines

Giving them a higher buff could cause a snowball effect after a scout rush or even a m@a rush.

So, to give them a minor eco buff, i have 2 ideas

That’s fair - it would really just be a direct change to the food cost practically. I guess then I still go back to the +10% or 15% attack speed for cavalry and see if that is too OP. If so, then remove it for the knight line or make it only apply 50% of the effect so either +5% or 7.5% or something. There’s some value where it is a reasonable buff but doesn’t make them too oppressive. In any case, I think they are still countered pretty hard by spear / skirm line given the cavalry / archer focus with mediocre infantry and some of the worst siege

Again, they have had some of the worst winning percentages for the past several patches and have one of if not the worst sets of civ bonuses. But I suppose some may feel differently on this one

Detailed data and statistics, including win rate and play rate, on the Magyars civilization in Age of Empires II in the 1v1 Random Map ladder across 1650+ Elo. Current win rate: 43.69%

Again, they have had some of the worst winning percentages for the past several patches and have one of if not the worst sets of civ bonuses.

Hmmm i see. I use to play civs with even worse winrates, so I didnt have a problem with their current state…

In that case, i would exploit their sneaky villsgers potential (thanks to wolf bonus) to make them flexible to control maps or dropping buildings, like what happened with goths after they received their free loom bonus.

For instance, they could have regenerating villagers and teleport the deer meat like khmer farmers.

yeah i think it can work, maybe something like 20% (i would guess it cant be too high as hunting is so effective and includes boars)

20% is too low if you see 57% for Tatars and 15% for Mayans (which covers everything including hunt).

Again, they have had some of the worst winning percentages for the past several patches and have one of if not the worst sets of civ bonuses. But I suppose some may feel differently on this one

That is because pre-patch Arabia was wallable and it is not good for Magyar scout opening.
The new Arabia for non-wallable is definitely buff for Magyars. Let’s just see how change of map affect the performance of Magyars.
Also, as earlier one pointed out that magyars are really good on the map hard to wall. Magyars are strong pick at last Red bull Wololo2 tournament on the map like Haboob (completely open map). Not all civ have to be top-tier on Arabia. Instead, they can be shine on the other map which is also commonly shown on Tournament. It is fine.

That’s fine but there has been no change in the win rates so far for this patch. They are identical to the prior patches. They aren’t even close to top tier on Arabia - they are awful on the map at 42.6% win rate

For Red Bull they won 2 times out of 5 and 3 times out of 7 for both the tournaments. Hardly a strong pick at all 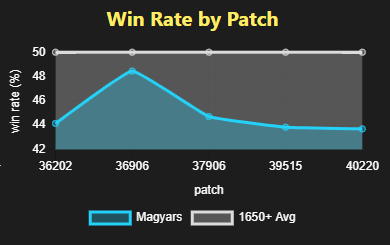 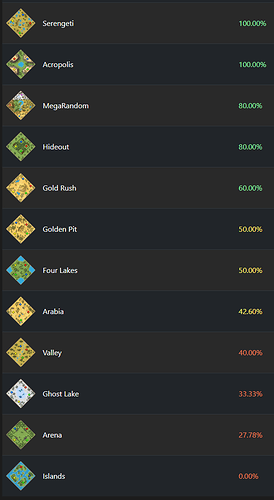 I think they shoud buff cav archers at first. At least the castle age cav archer, or the upgrade cost

This way, lots of low tier civs would be buffed, and only mongols within high tiers. Turks, koreans, vietnamese, tatars, portuguese: all of them have bonus in cav archers, like magiars.

And the only high tier one affected would be mongols, which just still would use mangudais, imho.

You’re missing the Huns which would be way overbuffed and are currently at ~53% win rate. Also this would affect the Indians and Japanese who have fully upgraded cavalry archers and are doing very well in terms of performance

Again, if there are material cavalry archer buffs then there would almost certainly have to be significant nerfs to a several civs to offset

Personally I don’t feel like there should be major changes considering how many side effects there are. Additionally, cav archers are particularly challenging to balance and can be fairly toxic to play against when they are strong

My bad, I forgot about huns. That is indeed a problem.

Indians dont use the current CA a lot right now and I dont think a little CA buff would push the civ to use them more often instead of other options.

Maybe japanese, or spanish, could make more use of them because of their wood bonus.

At least, i think they could try to reduce the cost of the upgrade. It is the least aggresive change, and would benefit more the civs without partian tactics (because they dont use HCA at all because it is so expensive for what they do without that tech), like byzantines, than civs thst already invest in hca (in that case it would be a nice help for them).

I think they shoud buff cav archers at first.

Imo even if they simply FIXED CA they would even be used more. Its not even a buff. It’s just fixing something that’s broken.

Of course it would be great if they had an actual buff like a minor attack delay buff. But if they even just fixed this garbage attack stuttering CA would already be a ton more viable…

Villagers can drop resources in every eco building.

I like this idea as well. But any direct eco buff will directly improve their m@a or scout rush. As res saved can be spent to get a stable sooner or any food gathered faster can go to another scout

What i just said applies here as well. Tatars have no bonus in feudal. Herding is slower than hunting. Magyar have THREE bonuses starting feudal.

Mayans are OP so i wouldn’t necessarily use them as a measure of balance… But more importantly the hunt buff would stack too well with their scout rush in certain conditions. So either keep it low or have people laugh off the idea.

Unless the direct bonus affects stone…?