Armenians should definitely be on here.

Don’t think we need all of them on here though. Tlaxcalans in particular seem like a poor choice, being far less interesting relatives of the Aztecs. Would be hard to differentiate them positively, except by inclusion of Spanish-influenced units/techs, although other civs could also be contenders for those.

I removed Armenians from the map because they don’t make much sense for AoE2 time period.

Their original kingdom is of antiquity age
https://en.wikipedia.org/wiki/Kingdom_of_Armenia_(antiquity)

Then in classical - medieval age they were occupied by foreign powers.

Then in high medieval they had a kingdom briefly named Armenian Kingdom of Cilicia/Lesser Armenia/Little Armenia/New Armenia. This was located outside the Armenian Highlands formed by Armenian refugees fleeing the Seljuk invasion. Eventually it got absorbed by foreign powers again.

Actually I removed a few other civs from the original map as well which you can check comparing with the original posted at reddit because I thought they are unfit for time period being too old (Vandals, Wari, Toltec) or are too modern (like Filipinos, Ghanaians)

You didn’t mention the Bagratid kingdom of Armenia, which existed for two centuries and whose capital was one of the largest cities in the world at the time.

I also think Armenia should be on the map. They were important during the crusades. 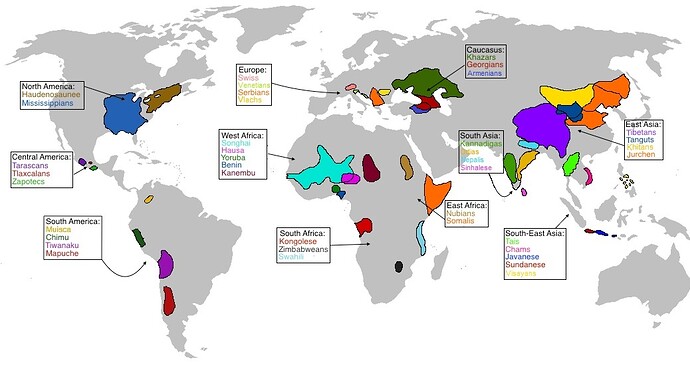 It’s always hard deciding which civs are worth mentioning as “missing”. I doubt Sundanese and Javanese would be introduced separately, but I would personally add Soninke (the Ghana empire fits in the timeframe as the predecessor to Mali), Jolofs, Fon, Deccani, Croatians and a few others, even though I know most of them probably won’t ever make it.

Caucasus and more sub Saharan Africa are the regions I am looking forward the most. In Africa were so many empires an until now we have only 2 of them.

Come now, we don’t want this to become a Paradox game or anything.

We’re long past the point where you can say there are too many… and moreover, the developers have recently shown that they can still produce unique civs.

the money has to come from somewhere, and there are certainly still some civs in the world that could be brought into the game. especially Africa and Asia.

I think an important civ you are missing is Gokturks/Uyghurs, as the early Turks were one of the great powers of the dark ages and did a lot of stuff across Eurasia. They are a big one missing imo.

Some civs I think could be mentioned which I doubt will ever happen:

I don’t think Tupis would fit the game, but I’d add them to the map just comparison/curiosity’s sake

because I thought they are unfit for time period being too old (Vandals, Wari, Toltec)

Vandals are fringey for sure, but it seems odd to DQ Toltecs (or Wari) for being too old. ~700 to ~1200 fits very comfortably within the AoE2 timeline. Also far more influential than Tlaxcala before 1519 - on the original map, Tlaxcala is a small dot wholly contained within the larger Toltec domain. (and Toltec influence is evidenced far outside the areas where they had known cities).

But yeah they arent needed at all

To be honest, I sometime feel like AoE2 should have been split into two games, one about the Early Middle Ages (and a little bit of Late Roman Empire) and the second one about High and Late Middle Ages. It would solve a lot of problems with some civs design.

Chinese, Koreans, Mayans and Persians could have campaigns from the 5th to 7th century

To be honest, I sometime feel like AoE2 should have been split into two games, one about the Early Middle Ages (and a little bit of Late Roman Empire) and the second one about High and Late Middle Ages. It would solve a lot of problems with some civs design.

I’ve mentioned my modern AoE game concept before. My original plan was to have that represent both WW1 and WW2, with everything in between and after up to the year 2019. However, the Great Depression really made things difficult for me, and I decided a better course of action was to split them into two separate games, one based on WW1 exclusively, and one based on the Great Depression and beyond.
The reason I bring this up is because the devs could’ve done something like that, but ultimately decided not to for whatever reason.