On the brazil server too???

Always getting shunted to the worst possible server and having the same thing happen to me. How they haven’t fixed this yet is beyond me

Hey all, I’ve managed to fix the issue (i think), was a last resort, but using a VPN seems to have fixed the issue, no drops on Brazillian servers since I’ve been using it.

I downloaded and use Betternet (free version) and just open it before i play and close after. Not ideal, but it seems to work so far.

Let me know how you go.

Just connecting via the VPN? did you have to select a specific location

For Betternet, i just open it and click connect. I dont choose server. Im using free version, so limited to 500mb or similar per day, but that seems to work fine for aoe if you turn it off after playing.

I assume other VPNs might work too (I found this solution in other thread to a similar issue - it was my last resort).

Ran into similar issues at least 5 times since the May patch, to the point that I don’t even play the game regularly anymore in fear that I’ll lose elo in botched ranked games. Can we get any info from the devs on whether we’ll be getting a fix in this month’s patch or is a map pool change all we’re getting?

the one that came up now was the whole game freezing while playing (mostly on brazilian server (that for some reason seems to be used for way more games than it should be, considering that europeans and australians seem to experience the same thing with having about 50% of the games on that bad server - but that could be discussed about in another topic)) For this issue i opened a new topic here - Dropping when playing on brazilian server. So to make things clear i think we might want to move the discussion (and all the bug reports) there.

Yesterday, similar happened three times in row after 20-40 minutes game play. Every time we played ranked against other opponents and every time one of the players was freezed. Once, my friend freezed and after he killed the age of empires process and we (teammates) resigned the game continued because the freezed player was in the game according to the DE (however he closed the progrem minutes before).

just happened to my teammate again, we were playing in US West.

the problem seems to be is his weak laptop.

My problems haven´t changed yet and the VPN trick didnt work. Games that didn´t run over the server in Brasil yust froze, too. The problem just arrived when my CPU was heavily overclocked.

Might be a different cause of the same issue then.
I know for a fact my CPU wasn’t overclocked. Of my 3 friends I have the more powerful PC but the issue happens to me 90% of the time.

then there must be almost several reasons for the same problem. Because since I switched overclocking off. The problem no longer arises with me.

the clock on my PC wasn’t sync prop

Playing in EU west. For 2 months or so this bug has been happening aaaaall the time, can’t believe they haven’t fixed it yet, yet they add events etc but the game still crashes A LOT. Games not starting, freezes, playing a teamgame where it shows 4v4 but you only see 3 people, so it doesnt start.

Today, waited 20 minutes for a teamgame, cause it won’t start, just as I get a game, a teammate crashes after 2 min, THANKS DE. It’s unbelievable how many bugs are in teamgames.
So disappointed with it.

Here is some additional diagnostic information for the issue where the game continues playing but the overlay ‘freezes’. I was spectating an online match (not replaying) when it happened. 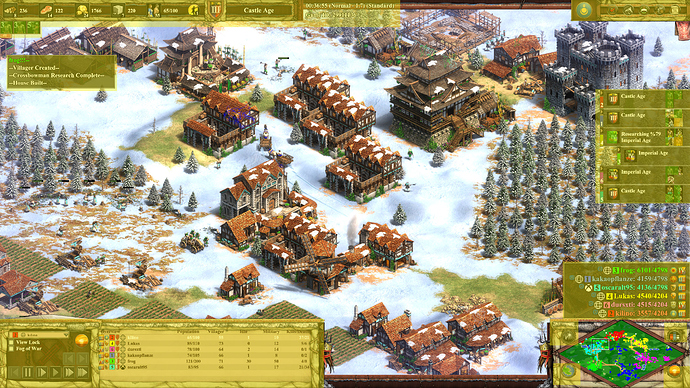 Can Dev’s confirm that this is being fixed on asap and will be in the next patch update? This is a problem for over a month and seems to be affected depending on the server (if you have around 200 or more ping). Making half the servers you play on a gamble.

This has been happening to me and some of my friends too. Not common during 1v1 games, but quite annoyingly frequent in team games.

The game doesn’t crash. It just gets stuck. I can’t chat/pause or make anything work within the game. I don’t drop until I quit. It’s not completely frozen because I can still click units/buildings and other buttons within the game, but nothing happens. I do hear the sounds when I click on something.

When I quit the game, I get out of the game normally and that’s when everyone else sees that I resigned.

I thought it was a rare issue but some of us have been noticing this quite regularly now.

This happened again. I have tried uninstalling and reinstalling the game. Can some dev help with this? TG is almost unplayable for me at the moment. This doesn’t happen much in unranked games, I think.

And it happened again just now (steam id: ingreenheaven, if that helps)