For some reason you can’t include the square brackets around my username when you search for it in-game.

Also, because this website seems to mangle formatting, here are the release notes:

NOTE: If you have other UI mods installed, this mod may not work properly if it is not high up in priority.

NOTE: For the full effect, you must also install the mods listed under ‘RECOMMENDED MODS’.

The goal of this mod is to create a UI that gives the player an edge by maximising situational awareness and information-gathering speed. There are some really great UI mods out there but they often have incompatibility problems when installed together, so I decided to combine some of them into one with some modifications.

This mod includes some or all parts of the following mods, some with enhancements and modifications of my own:

I recommend you also install the following mods (but place them lower in priority):

That’s all I know of. Click ‘More Info’ and leave a comment if you think another UI mod should be included. Enjoy!

I enjoyed reading your write-up of all those mods!

I made two more mods which can be helpful to new players like myself to learn/lookup important information mid-game more quickly than going to the tech-tree or checking a wiki, they are called “Civ Techs In Tooltips” and “Extended Unit Info 2.0”.

Great, thanks for all your cool mods!

Would you consider making a version of ‘0xDB Animated Idle Vil Marker’ with larger markers or would that be a lot of effort?

Have you tried the ‘Advanced Idle Pointer’ mod? The marker is nice and thick - very prominent - there’s no missing it. Have you tried the ‘Advanced Idle Pointer’ mod?

Haha, I know it’s technically the best for detecting holes but I just can’t do it. It’s the same reason I can’t use the “Bamboo Only (Small Trees)” mod…

Oh man, OxDBAOE2 delivers yet again - thank you so much!

Haha, I know it’s technically the best for detecting holes but I just can’t do it.

Hm… My opinion here is obviously biased since I made Chunky Tree Tiles but I feel like the gap/hole readability is even better than in Cube Mod, I mean… just look at that 1-tile-wide gap at the top in the comparison shot below, it’s most obvious (to me) with Chunky Tree Tiles: 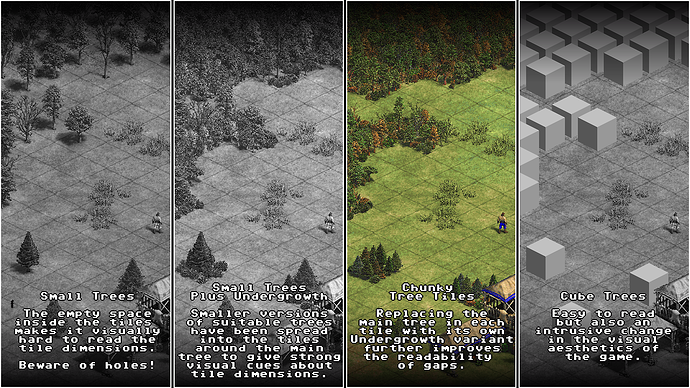 Oh, it’s quite possible - I’ve never actually used the cube mod - I’d just assumed it would be the most obvious.

Thanks, great mods. Is there anyway to get the resources panel larger? I struggle reading the numbers with the current size. Or maybe remove just it’s transparency?

I installed this mod and most of the recommendations. All seems to work except the No More Useless Tooltips. I still get the tooltips when I hover over sheeps or villagers or the queue.

I recommend you also install the following mods (but place them lower in priority):

This is a great list of mods to ruin the game with.