Hello, I thought I would take some time just to showcase the mod I made around a month ago, and still updating it very frequently, finding ways to improve it and such.

It’s called Improved Extended Tooltips, and it’s a textual/string mod for AOE2DE that updates the tooltips of all the units, buildings, upgrades and technologies in the game, in a way that shows more useful information about a unit, building or technology to the player.

This affects both techtree and ingame tooltips (as long as you have toggled the “Extended Tooltips” in options).
https://www.ageofempires.com/mods/details/14335

The reason I decided to make the mod was that I realised DE doesn’t have as good tooltip mods as the previous versions (voobly/HD), so I thought why not make one myself. There were some in the mod center but I didn’t like how they were structured.

Feel free to use this thread to give some suggestions and feedback about the mod if you wish.

I really like this mod, been using it for a week now. Much better than the default ToolTips.

Thank you for your efforts in producing this. Hopefully updates aren’t required too much for the sake of your sanity!

Thank you all for the nice comments.

Well since the latest change I did today, finally adding Research Time to all the unique and non-unique techs, I think I won’t have to do much work.

Just when I notice grammar mistakes. When a new patch hits, I usually just need to change 3-4 lines, so it’s not that bad

I was confused why tooltip mods were not working for me, needed to enable “Extended Tooltips”.

I’m very grateful to have found this mod. Knowing creation times is so useful!

I’ve made a formatting update to the mod recently, rearranged location of some elements(for example creation time is shown right next to the unit cost), and also implemented the “no useless tooltips mod” in my own mod, removing the non-needed tooltips that appear on mouse over such as “right click this unit to gather wood”, and also worked to shorten all the tooltips as much as possible, while keeping crucial info.

Here’s the example of how some of them look at the moment: 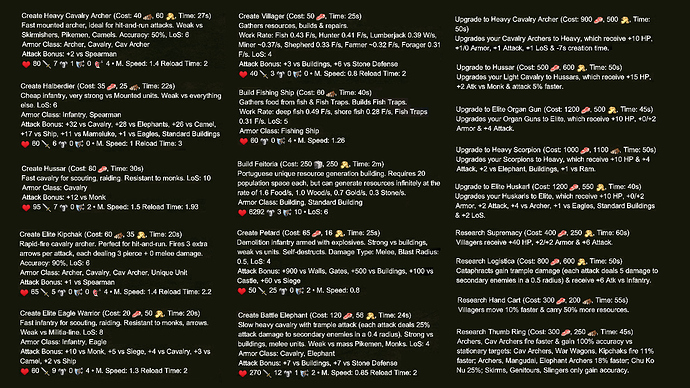 qick question i havent check the way you did it yet, those details such as move speed, reload time etc, are those auto generated via linking to .dat just like the cost? or did you manually type out all of those…

Yeah I just manually typed it out in the strings file. Took a lot of time but was happy how it turned out

I wish there was a way to autogenerate it like as you say, typing < cost > shows the cost, or < attack > shows the attack, but I had to type it all manually for the line of sight, move speed, reload time, creation time etc…

For example this is how it is for the Boyar:

i wish there were some sort of string we could use that leads to all these data. such as
cost