Makes dead units visible for 5 ingame minutes instead of fully sinking into ground. This way battlefields will be littered with corpses telling a brutal story of what happened there. Is not a data mod, so works everywhere without affecting other players - standard game, multiplayer, campaigns, replays.

Please let me know, if you find any bugs or have suggestions

60% above ground1920×1080 1.4 MB
14 Likes
[AESTHETICS] bones, rotten corpses, lucida blackletter, zoom out, score size
Corpse decay - will it ever be added?
Decomposition of bodies
Decaying Corpses and Skeletons
DE2 : Requirements for next major update
Old AoE2 vs. New AoE2
Let's talk about the Skeletons and the Decay
Updates we really need post-April patch
What would you like to see added to AoE2 in the future?
RvE88 January 9, 2020, 5:35pm #2

I subscribed to both your Decay mod, as well as the blood month (on the website you linked to).How to enable them? Started a game, but neither seems to work.

Did you subscribed to them from ingame mod manager and ensured, that both are marked as enabled? My mod will work without restarting whole DE application, but Crimson Blood might need it, I don’t remember.

Just saying, in scenario editor with the trigger ‘Modify resource’ and then selecting change decay corpse time, you can achieve what youre asking

Oh, such a cool feature. This would only apply in that specific scenario, not everywhere though.
Also my mod doesn’t change decay time. It instead modifies decay animations, so that corpse remains visible, instead of sinking almost fully under ground.

I noticed that, under “mods” within the game itself, the mod itself is constantly disabled. I reenable it, but every time I relaunch the game, it’s disabled again. Apart from that, it seems that the “browse mods” tab inside the game, leads to a crash to the Windows desktop (without an error message)… very strange

I unsubscribed from every mod I had, and resubscribed for just Decay and Crimson blood again.
Unfortunately, same thing. Everything time I start the game , the mod is suddenly unchecked (disabled). 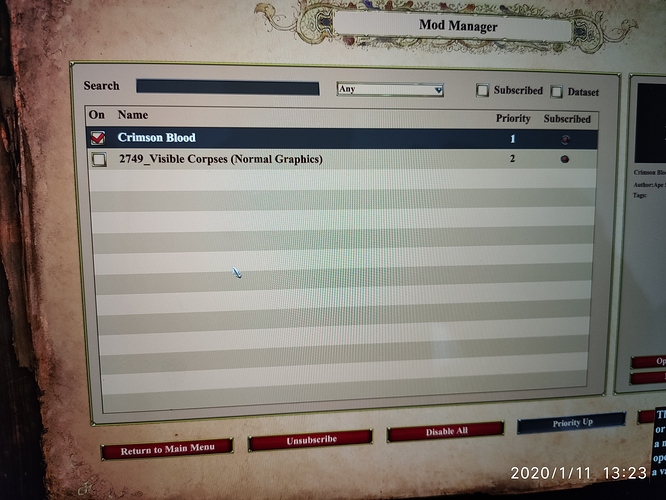 Also tried making the mod the no 1 priority. Same issue.

This doesn’t happen with the other mods, like Crimson blood. They remain “checked” (enabled)

Update: Even when I reenable the mod, and start to play straight after, it doesn’t seem to have effect. The corpses disappear within 10-20 seconds.

You shouldn’t have “2749_” prefix displayed before mod name in mod list. This means a bug.
Maybe downloading mod has failed.

Check, whether you have “2749_Visible Corpses (Normal Graphics)” folder in “C:\Users{username}\Games\Age of Empires 2 DE{userId}\mods\subscribed” and it is 339 MB in size.

If there is such a folder, then check whether it has “resources” folder and “info.json” file inside of it.

Thanks for making the mod, it’s pretty epic.

I’m wondering if you could make one where they’re more decayed to make it look similar to voobly? I think it currently might be a bit too distracting because they’re so visible.

I don’t know what % decay I’m asking for, maybe 80% or so, I’m just thinking of this kind of visibility

so it’s easy to get a rough idea of how many units are dead at a glance (and I guess knowing which colour is nice too).

The folder seems to be there and has the right size.
Nevertheless, whenever I try to install this mod, it seems to take ages to load under the mod tab (screenshot below, showing a spinning wheel). 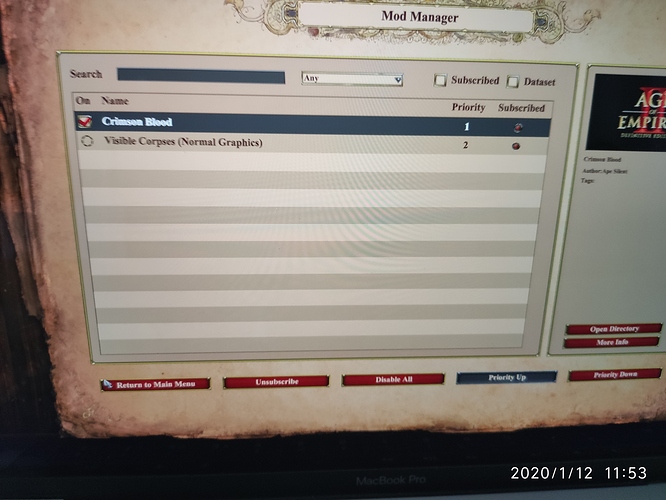 If I restart the game, the spinning wheel is gone, however it isn’t working and disabled.

Is there a downloadable file, I can just drop in a folder?

I decided to use 60% (40% of decay animation), because it was smallest visibility percent, which still had dead units pretty well visible. In some situations it causes problems distinguishing alive units from dead, but it is usually not significant problem. This was best compromise IMO.

Obviously different people have different preferences. I had person preferring 100% and another one preferring 50% visibility. In the end I did a lot of tests and settled on a compromise which best suited mine and hopefully majority’s taste. I am not going to change visibility percent for this mod, because people are already subscribed to it and many are certainly expecting current visibility to remain.

I converted decay files automatically using converter program I made. It is made in Python and I plan to publish it one day when I have polished it (have visibility percent and other arguments inputtable from command line instead of hard-coded into source code, etc). With this program everyone could have exactly the visibility percent they prefer. 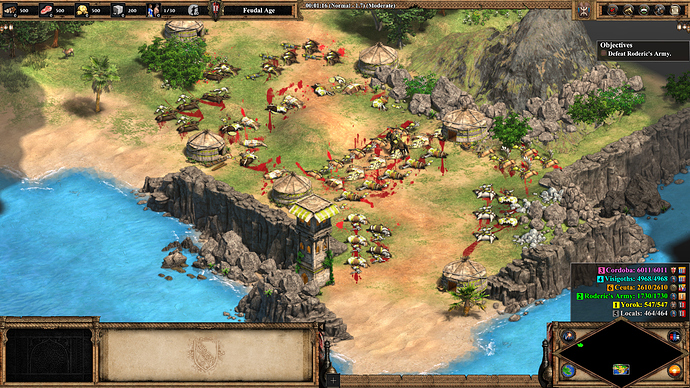 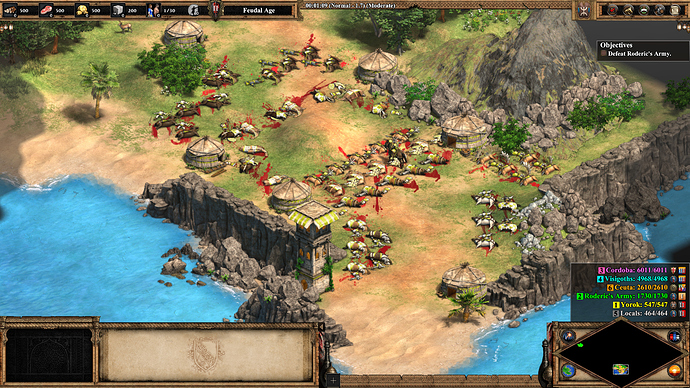 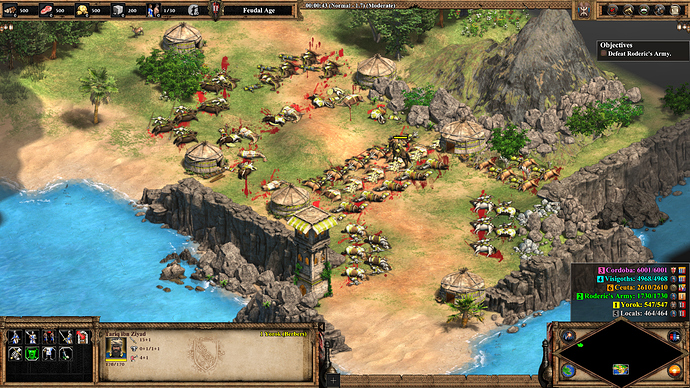 Is there a downloadable file, I can just drop in a folder?

A lot of people are having problem with mods and there appears to be an issue on your end. It probably manifested because this mod is big in size and would occur for other big sized mods for you. Hopefully developers will fix this.

I mean making a different mod with 25% or so visibility so it wouldn’t affect people who currently have it downloaded. But I don’t know if that would take more effort than polishing the files.

It’s looking awesome, thanks for making the mod!

I mean making a different mod with 25% or so visibility so it wouldn’t affect people who currently have it downloaded. But I don’t know if that would take more effort than polishing the files.

It would require making both normal and enhanced graphics version for each visibility percent and it would mean many versions of this mod cluttering mod list. Some people would certainly prefer 100% visibility percent, others maybe 75% etc.
It would probably be best if I would publish converter, so everyone could use his preferred visibility percent. 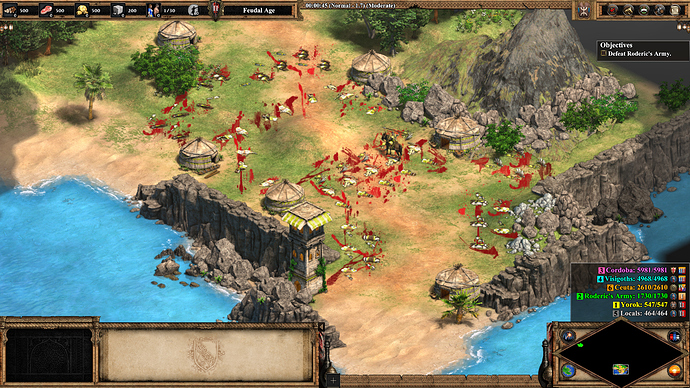 I have heard reports, that mod takes long time to download. Seems to be caused by generally low bandwidth of mod server. You probably just have to wait till it finishes. You can check in Task Manager -> Resource Monitor -> Network tab whether game is still downloading mod or maybe has gotten stuck due to some bug. It probably needs some time for unzipping in the end, but that should go quite quickly.

All issues with downloading/installing this mod are fault of mod system, because many people have succeeded in installing. And you have probably seen how many people are having troubles installing different mods

All issues with downloading/installing this mod are fault of mod system, because many people have succeeded in installing. And you have probably seen how many people are having troubles installing different mods

Can’t you upload it to a server and let us unzip them to the mods folder? That would be awesome

Hey hey and thanks a lot for your mod!

I like it and we would like it even more with longer visible times. 5 minutes are too short.

PS: Because of your mod I have caught AoE2de today.

Can’t you upload it to a server and let us unzip them to the mods folder? That would be awesome

Hmm, I might do it, but I am not too happy about it, because this might end up with me having to use third-party hosting for hosting mod every time I update it.
Mod system has to work well enough for letting people initially download and after every update automatically download mod seamlessly.

Did you checked from Task Manager, whether and with what speed does game download mod? You could calculate based on speed, how long does download take. Are you trying to subscribe to normal and/or enhanced version? Enhanced version has 450 MB zip size, so it could take a while if you have slow internet. You can let game download mod in backgrond while you do other things on computer.

Hey hey and thanks a lot for your mod!

I like it and we would like it even more with longer visible times. 5 minutes are too short.

I am very pleased, that you are liking the mod

Hearing positive feedback about my mod makes me happy for all the effort I put into it.
Unfortunately I can’t change corpse visibility time without data modding. Not being a data mod is one of the main characteristics of this mod, which makes it work everywhere, like I wrote in mod description.
So 5 minutes will have to remain as visibility time. Fortunately it is enough for getting feedback from recent battles and on the other hand avoids whole map getting cluttered with corpses from whole game.

There really seems to be a strange bug with the normal gaphics version.
Uninstalled AoE, deleted the Games folder, and unsubscribed from all mods.

Reinstalled the game (without the DLC), went to the browse mods section within the game, and downloaded the 118MB mod. Installation was almost instantly.

So far so good.

Restarted the game, just to see if all went well, and again there is the “loading circle” in front.

Went to the browse mods tab, and back to the installed mods…this did the trick.

The other mods are fine, but this one seems to have some kind of issue, every time I restart the game.

Nevertheless, it does work now.

You can let game download mod in backgrond while you do other things on computer.

Believe me, I did. But it just never ends. Issue is, I subscribed to both Versions at once and there’s no managing the downlaods