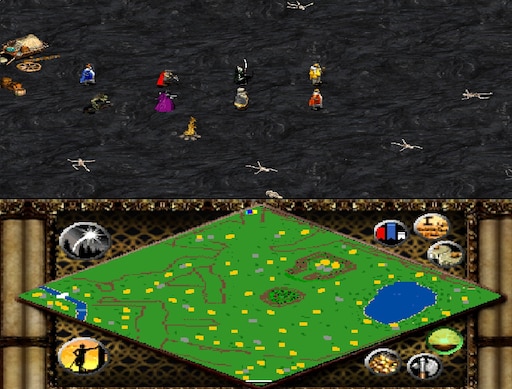 Sauron lies defeated. 8 Kings move into Mordor to claim it as their own. Everyone starts north of Mordor near the ruins of the Black Gate with a king. King moves a lot slower and can’t garrison, but has 1000 hp and 1000 armour. You can heal your king by ordering your villagers to repair him. Kings produce 1 of every resource per second. King can make villagers as well. You will not lose the game if your king dies.

Can win with allied victory clicked, etc. Everyone can make a Feitoria. Feitoria only take minus 10 pop. Pop on map is very high. Lumberjacks work faster. Resources on the map last forever. Everyone get full popheadroom. Town Centers have 5000 base HP. Pop is very high.

This mod changes every civilization in the game into a LOTR civ. All land military units get 500 plus HP. Spearman and archer units only get a 400 HP bonus. Stone walls are much stronger. Walls and towers take longer to make. Palisade walls are stronger.

Most elite units regenerate and are immune to conversion.

Dwarf civs Malay/Iron Hills, Ethiopians/Moria, and Goths/Erebor can make Throwing Axemen in the archery range. Slower to make than archers but does melee damage at range. Dwarf civs have a lack of archers.