cavalry archer is a pretty good unit, at least cost vs stats wise.

But it could get weaker in the colonial age and be improved in the fortress age. It is an archaic unit after all.

Maybe let them could garrison in the church and the field hospital.
While the church be garrisoned by them, it could have the heal ability and well improve the EXP trickle. If we garrison more in the church and the field hospital, the heal ability of these 2 buildings would get more better.
Before this, they have to be able to heal the units, at least the settlers, no matter the “patients” are working, moving or under attacking.

In order to heal wounded units regardless of their location, I think it would be better if they are inactive. But in case of being near the church or the field hospital manned by priests or surgeons respectively, they could heal while fighting or moving slowly, and in case of being still, quickly.

it would give both ottomans and russian an inherent goon skirm combo.

The specials technologies card, I understand. Not bad for the Ottomans. For other civilizations they could be improved, such as the Germans. You should also make infinite mercenaries cheaper with the “free” mercenaries upgrade.

It is inefficient that the cows could not be trainable until shipping the card.
That is a problem.

I’m for enabling 10 to be made without ranching from the fortress age.

Livestock is a great way to increase food income without requiring as many villagers, but cows historically were more difficult coz they sucked up more water and wondered about more.

Maybe surgeons should be available in age4 by default and not take pop slots, but have a limited number.

So a similar to the idea I had for cows…I like surgeons. I just don’t want to spend a shipment to get them when I can have preists that are good enough to replace them even if they are inferior.

I think the advanced church techs should be revisited as some are good others…not so much.

Some politicians to advance of age are very useless, as for example those who grant cows or a hot air balloon.

I think that also the fort and factory carts should be enabled in the urban center (Unlocking with the cards) and giving them a very high price in case of buying another to replace if it was destroyed. Scouts don’t build forts fast enough.

Should you be able to rebuild factories III - Discussion

I was thinking that they should make you be able to rebuild factories after they are destroyed. You still could ship the two for free, but only have two at a time and they would cost 500 of each resource to rebuild. I think this change could help counteract players who cripple your economy because they ignore your army and run straight for your factories.

Some politicians to advance of age are very useless, as for example those who grant cows or a hot air balloon.

The Naturalist is a good one, she grants semi-fattened cows and 2 villagers since you can normally only make one villager at a time until fortress age every tc work time counts. Not to mention the food in the cows are worth it.

Mercenary contractor however could benefit from shipping a few mercenaries to give it some tempo.

So a similar to the idea I had for cows…I like surgeons. I just don’t want to spend a shipment to get them when I can have preists that are good enough to replace them even if they are inferior.

I think the advanced church techs should be revisited as some are good others…not so much.

I also like surgeons and I try to squeeze them in as often as possible, sadly not viable in PvP outside of NR40.

The advanced techs in church really need a review. Most of them are so bad they are not even worth the free cost.

The Naturalist is a good one, she grants semi-fattened cows and 2 villagers since you can normally only make one villager at a time until fortress age every tc work time counts. Not to mention the food in the cows are worth it.

He did not remember that they had improved it. Thanks!

You’re right. It is just an idea that would be good for a treaty.

The Indians’ “Pasture” and “Call to Arms” cards are useless. How could they be improved …?

Grazing could be changed to giving a tricle of wood to houses and one of coin to TC instead of depending in units. Im saying this cause units have to be alived too much time to get back the spent resources and if we boost tricles it would be too OP until the treaty end.
Something like 0.5 wood/house and 0.7 coin/TC would be nice.
Obviously it will become an age IV card as factories
@OperaticShip743
@ArrivedLeader22

There are several “old” cards that need a serious redesign, and some of their functions should be transferred to a normal tech.
I have been holding that opinion since TAD: TAD civs have too many “free cards” that do not require xp or card slots. For example, they have a much easier access to units they typically lack. Europeans need a card to have one-time access to such units, and Asian civs can infinitely train them through the consulate. Yes they “still” require exports, but that saves one card xp + one card slot and card slot is also a resource. African civs are an exaggerated version of this.
That being said, some techs that hide behind cards need to become more accessible. For example:

To emphasize, card slot is also a resource, and a very limited one. Saving a card slot not only saves the xp, but also gives you greater flexibility.

It would be nice if the mortar was enabled with Advanced Arsenal. Good idea.

The card gives a dog, improves the life points of the explorer and some ability. The latter is different for each civilization.
Why not award when advancing in age, regardless of the politician with whom you advance?
I can’t think of a better idea.
This card is good for catching the most expensive treasures early, but I don’t know if it’s worth it. If it is worth it, it is very rarely.

I have been thinking, the explorers of the original civilizations, other than ports and spain, are somewhat boring and lack special abilities, or if they do have special abilities, they are locked behind a card, and are generally pretty luckluster in actual combat that doesn’t involve treasure guardians. Meanwhile, TAD and WC heroes are pretty good on their own in combat, and at least for TAD, they have pretty useful upgrades available at the Monastery. For example: Chinese monks have critica…

The irregulars letter of the Ottomans I do not consider useful either. Bonus damage against villagers by 100%. It sounds good, but in practice it is very useless. Proposals …?

.5x vs cavalry. that way it boost their dmg vs units the ottoman otherwise struggle against lategame.

Maybe move it to the industrial age, and in addition to the damage to the villagers, add the bonus that you suggest against cavalry.

There are 2 infinity wood cards for the Indians, one with 100 wood greater than the other. I think you could take off the smaller one.

The letter of ‘murderers’ or ‘agents’ I do not know how much it is used. It is the only way to improve this unit. There are very strong civilizations in the mercenary spindle and it would be useful for assassins or agents to have an upgrade by default, and not just upgradeable by cards. This card could give them a ranged attack. 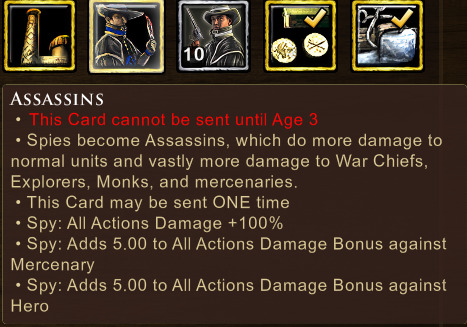 That card is already improved (a little). In the earlier versions it is an Age IV card that auto-upgrades your artillery, which is even more useless.

his card could give them a ranged attack.