This post is to advocate for the nerf of siege units and the introduction of a game concept that has always been a part of previous Age of Empires games (Friendly Fire).

Issue #1: No Friendly Fire
The current game play with No friendly fire is very unrealistic and the fact that high damage units such as mangonels and other area of effect damage units (like the nest of bees, ships with canons etc…) can fire at masses of troops that have both friendly and enemy units in them with ZERO consequences or control is crippling to strategic gameplay. This, in combination with the fact that siege units in Age of Empires 4 have FAR more HP then siege units in previous versions of the game, have given rise to the “siege army” tactic that once complete is far over-powered and nearly unstoppable. Even the units that are meant to counter siege, such as light cavalry, cannot do anything to stop a siege army as the siege units have far too much HP to kill quickly and units such as mangonels, nest of bees, and bombards can target enemy units within the siege formation without worrying about damage to friendly units/siege.

Issue #2: Siege has too much HP
Not only does friendly fire need to be introduced, especially to area of effect units (siege in particular) but siege units should not have more health and be harder to kill than other units. Siege units should be very soft targets that require protecting with formations and quick thinking tactics to stop flanking (as in previous age of empire games).

Issue #3: Siege can shoot too close
Additionally, to prevent mass siege armies from being able to kill units that have successfully reached and infiltrated a “siege army,” the minimum range for units such as bombards, nest of bees, and mangonels needs to be increased.

Issue #4: Siege deal far too much damage to buildings
This issue I see as the least of the 4, but it is something that really took me back when I first started playing the game and has always irked me and other players I have talked to and that is how much damage (or rather how fast) some siege units take down buildings (especially harden structures such as castles and walls). Trebuchets and MOSTLY bombards deal WAY too much damage to buildings. At the very least, walls should be able to hold up against bombards better.

If nothing else is done to change siege, please, please, please, add friendly fire to the big three (mangonels, nest of bees, and bombards). Friendly Fire is an absolute must to fix the crippling effect siege has on strategy (lobbing mass damage area of effect by siege in battles with ZERO strategy and taking no friendly damage). As the game is, battles are not about strategy or countering units, as all other units are simply place holders to get units to mass for area of effect siege to NUKE everything (and miraculously cause zero damage to friendly troops). Even using staggered formations and cavalry to attack siege by flanking is hardly effective due to the fact that as soon as your units reach a siege unit, it has so much health that the rest of the siege will have time to target (your now massing units on the siege targets) and eliminate them with ease without so much as scratching friendly siege units (mix of problems, no friendly fire, too much hp for siege, and not a large enough minimum range).

Siege should be a great additive to a battle IF used correctly by placing well timed and sequenced strikes (ie shooting at the back of the enemies’ lines and hitting ranged units or massed enemy units, they should not be able to just shoot willy nilly at the front lines where friendly troops are wholly engaged without any regard to fratricide.

Siege is a good spot and it is already easy to kill. Further nerfs to siege will make it totally useless. A lot of people even argue that the past nerfs to siege went too far.
Bombards are an age4 unit so it makes sense for then to do the damage they do, while with trebs you need 2 or 3 to siege down a keep because of villagers repairing.

With what calculation does he affirm that the siege does a lot of damage? You should know the DPS concept, because of the attack delay of 12.5 seconds, its damage per second is 20. That has to be divided by the Hp of a wall section which is 3500 HP; that gives 175 seconds which is almost 3 minutes 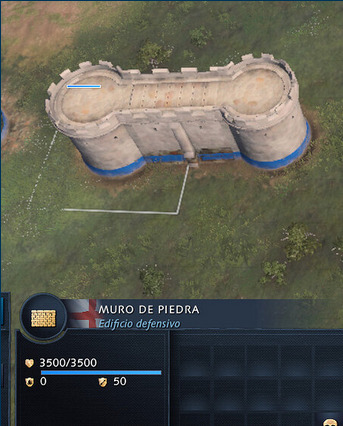 2-3 trebs is nothing, first of all. Secondly, if your premise is that a player throwing a bunch of workers onto a keep to prevent it from going down is the reason why siege is not over powered, consider the fact that it requires stone to repair keeps so the player is losing stone while they do that, secondly the keep itself does nothing to kill the trebs so eventually the keep will fall anyways. All the player repairing the keep has achieved is buying time which is exactly what repairing a keep should do. So long as they have the stone, and the enemy is doing nothing to kill the workers, they should be able to do that indefinitely against 2-3 trebs. I do not think that is unreasonable at all. I do think that sending 2-3 trebs to destroy a base an expecting it to be unstoppable is unreasonable. Additionally, that assumes that a player can quickly put a bunch of workers on the keep to prevent it from going down which would require the workers to already be close by and whatever they were working on is now being halted.

The main point of this article, however, is siege being used in the battlefield recklessly to destroy armies due to the fact that there is no friendly fire and how fast siege can destroy a base before a reactive army can do anything to stop it.

This calculation is with 1 treb attacking a wall. I do not think using 1 treb to attack and destroy a wall from a safe distance is unreasonable to take a bit of time.

Yes, you need 5-6 six shoots from cannons to take down wall. 1 hit less for gate

You’re suggesting way too many changes to an entire unit class without thinking through the impact of each change of its own.

Also I personally hate “it’s not realistic”. Gameplay comes before any adherence to realism. The lack of friendly fire is an intentional choice and a part of thy balancing of siege as a unit class.

You do realise that siege costs so much more Relative to other units than it did in previous titles?

That is the reason it has more hp, because relatively speaking it’s easily double the price or more than it used to be.

With regards to Lack of friendly fire and min range. You also realise how little siege is used in aoe2 by most players, partly because of these constraints? (On top of the lack of ballistics)

I also think there should be friendly fire at a reduced rate of base damage, but it will definitely affect (specifically)how often lower elo players use those weapons due to micro constraints.

If anything siege doesn’t do enough damage to buildings for the cost, and thinking otherwise is possibly an indicator of the type of matches you play and how you don’t realise how stagnant the games are becoming and that this will actually turn off players. ESPECIALLY walls.

Yet that’s the specific thing you want buffed? No thanks, that’s unhealthy. They’re already too tanky and will likely see a nerf in the future. You need to consider the broader appeal of the game and how campy choke point maps are.

Yes, you need 5-6 six shoots from cannons to take down wall. 1 hit less for gate