Hello, we have a new bug and I dont know where it comes from.

Starting this week there are constantly games that dont start but stuck in the loading screen.

It just doesnt continue and the only way to get out is ALT + F4.

First I thought its something that happened once, but after it happened 3 times I asked in chat and its happening to everyone at the moment. I dont have exact data but I had it 50% in my 6 games today.

No comments? I m confused, this is a huge issue atm

There must be a ton of people having it.

every single game i have tried today gets stuck on the loading screen. all have been 1v1 and I have restarted my game several times.

+1,
4 out of 4 automatch game so far, stuck in the loading page since last patch.

There are a ton of ppl having it, but the step into the forums is big, so thousands of them just give up. 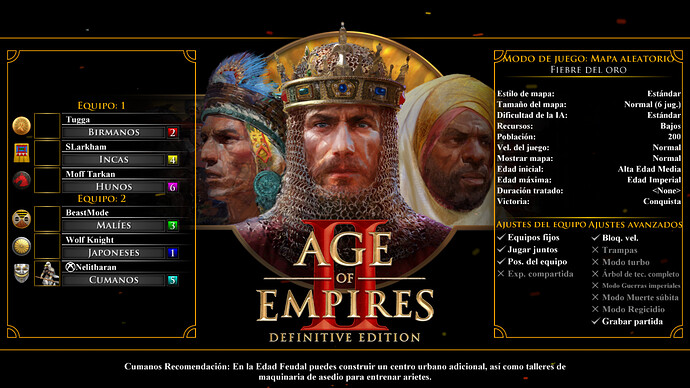 Happened to Daut as well now. Just dropped him from the game. It is really annoying that this is happening every time new patch comes out, and there are still some issues from last patches. As for me, I have given up, I don’t expect them to fix these issues, as it looks like they are not capable of doing it, especially for users that are having these or similar issues for months now. Also, I do not care about AOE4 that much, because, if they are not able to fix AOE2, they will ruin AOE4 as well.

Hey mate I remember your name from a previous post about freezes/crashes. Did you manage somehow to overcome the freezes that started with the LOW update? Thanks in advance!

I am one of those lucky ones that only has high GPU and CPU usage, but game works normally in 90% of the time. But, I am a member of a big Discord group and we play lots of team games together, so there, there are incredibly high number of people with variety of different problems, and those latest are disconnections from the game before it even starts, and similar. They wrote here, via support option as well, but none of their issues was fixed. So I am just disappointed because of them, as they like this game and we cannot play it together.

Sometimes you gotta start the game yourself

(this does not work and is purely visual)