First of all, I don’t speak neither English nor Thai as my native language. So please bear with me if I make any grammar or puctuation mistakes.
This is just a conceptual suggestion, that’s why the thread will only address bonuses, unique units and techs. Specific bonus values and the tech tree can always be tweaked for balance later.

Why the Krung Tai kingdom?

-It’s already in-game as part of the History section of the Khmer.
-Krung Tai was a notorious regional power during the era portrayed in Age of empires II.
-Krung Tai’s history is interesting enough to be part of Aoe II. It started as a small group of immigrants and ended up defeating the Khmer empire and winning against the Burmese kingdom.
-There was a strong rivalry between the Tai (Siamese) and the Khmer; and the burmese to some extent.
-Krung Tai was the home of the Tai people. The Khmer empire, Cambodian people. The Burmese kingdom, Bamar people. The 3 kingdoms had different ethnicity, language and culture.
-Krung Tai fought against the Khmer, the Burmese, the Malay, Ming dynasty detachments, and interacted with the Portuguese.

Team bonus
Krabi-krabong warriors are available at the barracks.

Note: This suggestion combines Lavo, the Sukhothai kingdom, and the Ayutthaya kingdom -but there are some references to the southern part of Lan Na- because they were Tai.
Also in this suggestion, the term Thai will be used for linguistic and cultural matters; while Tai will refer to ethnicity. Tai means free, and that’s the demonym they used to call themselves after their emancipation. Besides, it is theorized that Siam comes from the Pali word syam (red) related to suvannabhūmi (land of gold), or the Sanskrit word syāma (dark). The word was used by the Portuguese in the 16th century and became the accepted term. As opposed to Angkorians who called them Siem, meaning savage or barbaric in old Khmer (later adopted as Sien by the Chinese) but usually it wasn’t used as a slur or taunt, back then it was more akin to stranger or outsider.

Historical background
Just if you are interested in reading it.

About the Krung Tai kingdom from Aoe II:

Finally, the king commanded the army. Between the ninth and fourteenth centuries, Khmer rulers continuously conducted military campaigns and conquered much of Southeast Asia. Their major enemies were the Siamese, the Vietnamese, and the Cham, who raided Angkor in 1177 and 1178. The Khmer had no standing army, but relied on appointed captains who were responsible for conscripting peasants in times of war. Aside from this large contingent of peasant infantry, the army deployed war elephants, sometimes mounted with ballistae.
The Khmer not only fought other civilizations. Because kings married multiple women, disputes between different lineages often resulted in civil wars. For example, after Suryavarman I (1002-1049) had claimed the throne, he fought eight years with other contenders. Political instability was inherent to the Khmer society. However, from the fourteenth century on, civil wars became more frequent as rulers were unable to deal with other, structural problems: rice cultivation declined due to a cooling of temperature, the conversion from Hinduism to Theravada Buddhism undermined the legitimacy of kings as divine ruler, and warfare with the Siamese resulted in a continuous loss of territory. Eventually, king Ponhea Yat (1405-1463) abandoned Angkor in 1431, marking the end of the great Khmer Empire.

About the Tai kingdoms:

Over the centuries, from the mandala centers period through the Lavo period, the Sukhothai kingdom, until the Ayutthaya kingdom, the Tai have relied on agriculture to support their villages. They mainly cultivated rice (Oryza sativa) and mung beans (Vigna radiata). The dominance of rice reflects the natural environment of their territory and the historical importance for Tai traditions. Production areas were the irrigated and high-rainfall lowlands, mainly the central plains and the south, while the northeast was affected by variable water regimes, and the north was highly productive thanks to its narrow river valleys. The northern areas such as Phitsanulok, Chakangrao, and Phrae, and Lamphun and Chiang Mai from Lan Na (known as the Kingdom of a million rice fields) were major rice producers. This suggests that there was farmer risk aversion and rice was locally perceived as low risk. Due to their desire to reduce risk and save up resources, the Tai implemented a system of irrigation to control water levels in flooded paddies to favor glutinous rice, and reused the water from irrigation canals to sustain other plantations. For example, it wasn’t rare to see paddy fields next to plantations of yang trees (Dipterocarpus alatus) and Thailand rosewood (Dalbergia cochinchinensis), or thai ornamental flowers farms (Brassavola nodosa, Cymbidium insigne, etc). It is important to note that Thailand rosewood is one of the most valuable hardwoods in the world even to this day.
In the floodplain of the Chao Phraya, farmers turned to a different variety of rice (the so-called floating rice, a slender, non-glutinous grain introduced from Bengal) that would grow fast enough to keep pace with the rise of the water level in the lowland fields. 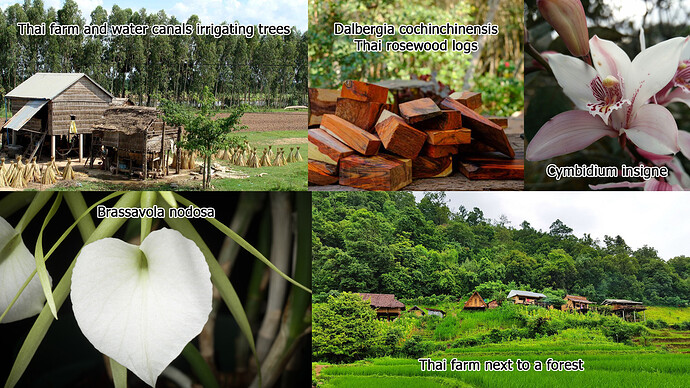 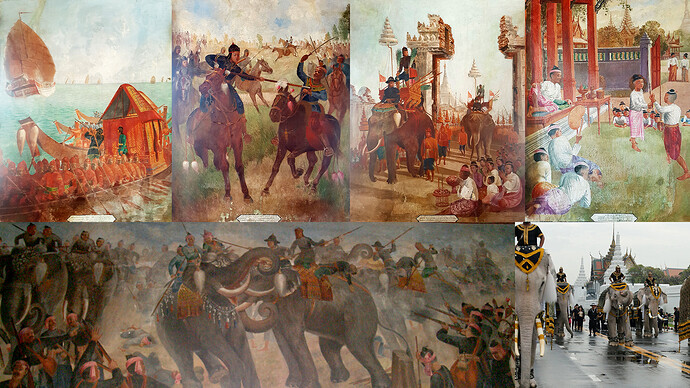 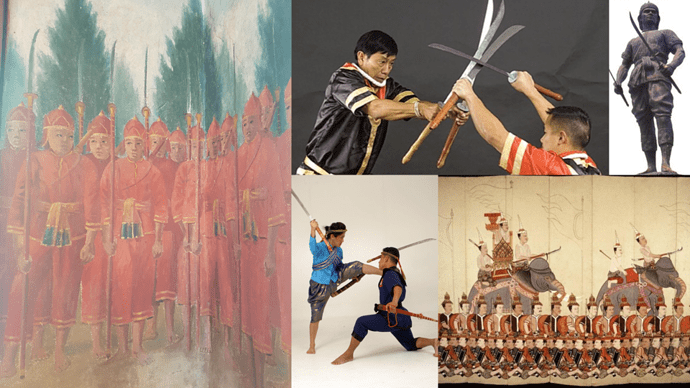 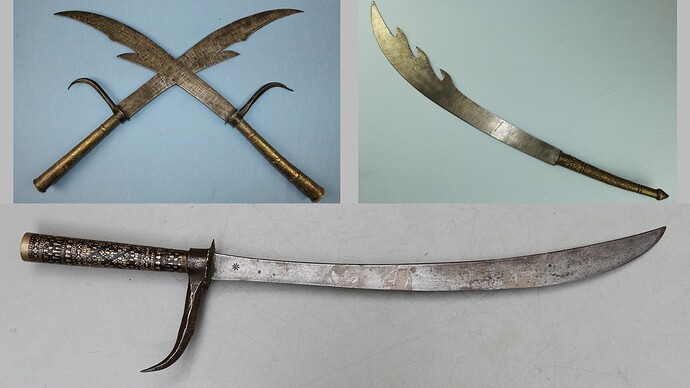 -The Tai defeating the Khmer empire.
-The rise of Ayutthaya: from the foundation of the city until the siege of Malacca by the portuguese.
-The life of Naresuan The Great.

Build:
These eco and military bonuses were chosen to emulate the Tai kingdoms from real life. Especially the warfare part (read it if you are interested) and the fighting style: In feudal, the bonus for scouts represents the resilient horses from Lavo. In the Castle age, light infantry (represented as krabi-krabong) and elephants like during Sukhothai. In the Imperial age, elephants, speedy cannons, and gold-only hand cannoneers (mercenaries) representing the quick acceptance and development of gunpowder in the Ayutthaya kingdom.

Source
Thanks to google translate

17 Likes
[Hub] Civilization Concepts
Could you give us more American and African content?
TungstenBoar August 3, 2021, 5:14am #3

-Farmers generate X wood per second while in gathering animation.

I like this but it may end up being a bit annoying in water maps. Maybe not though.

Either way its a fairly minor eco bonus on itself, however…

This is really really strong for scouts. It wont probably be OP with scouts

I would recomend you to make a more unique tech tree personally.

This stuff is fairly strong at imperial, but before that its fairly non-impactful. THe civ may struggle hard there, harder than Mongols most possibly.

Interesting name for the UU (important elephant), I think it’s called Chang Pheuak. Anyways I was thinking maybe a battle elephant that has range like an elephant lancer or maybe an elephant cannon unit.

They can make hand cannoneer cost gold only since they were Portuguese mercenaries. I made a scenario where I made samurais and conquistadors available via a trade post. That would be a cool concept of a unique building to buy other civ uu or just conquistadors.

-Farmers generate X wood per second while in gathering animation.

wil be worse then slav civs. so similar nobodey wil can tell em apart if more than 2 india civs + thais.

This is honestly an stupid thing to say. How is it ANY diferent from Slavs.

Those diferent stuff you complain made all the best civs unique for a reason. India can have the same treatment as Europe had in terms of civs with unique gameplay.

Thai culture is very much influenced by india too.

Is it influenred by India? Yes. However its not more influented by India than Byzantines influented Eastern Slavs or Southern Slavs. Not to mention India has a massive diversity.

Is it influenred by India? Yes. However its not more influented by India than Byzantines influented Eastern Slavs or Southern Slavs. Not to mention India has a massive diversity.

I think you miss understood Im not against dividing india in anyway but more SEA civis seems a bit too much as other exotic civis only have 2 or 3.Adding Thai or the correct naming should be Siamese is same as adding serbia,nice to have but already covered.

I always wondered why the Thai/Siamese weren’t a civ in ROTR.

It is a good suggestion for a possible next East asian DLC including new Chinese civilizations, a Thai civilization or something similar like that.

We definitely need Siam in-game since they’re the archenemies of Khmer.

No we dont,what we need is tibet.

Siam is more important than Tibet.

Siam is more important than Tibet.

In my opinion both would be great additions in their own ways, perhaps alongside one further Indian civ in an Asian themed DLC.
After that they could move proceed with Africa and the Caucasus (if room, also the Balkans) to at least roughly complete all regions.

Theres a big diference though, Thai were consitently a major power of the region while Serbia wasnt as much. The Thai kingdoms were around the same level as the Serbian empire and those lasted quite a bit more.

Well, I suggested a DLC centered on East/SE Asia that includes Siamese (Tai), Champa, Tanguts, and Nanzhao a few months ago.

And Jurchens could also be added. I can imagine their unique unit being a heavily armored cavalry archer with short range but its attack would ignore enemy pierce armor.

The Champa were also the archenemy of the Khmer and of the Viets, they even managed to sack the Khmer capital Angkor. I hope the devs could add Champa as a new civ along with the Siamese in a future DLC centered on East and SE Asia.

I personally like Champa, but in practice, they are closely related to Khmer and would be extremely similar to them outside water and their main eco bonus.

I think they are a fine choice, but I would add Thai first

Well, the Siamese were also closely related to Khmer culturally speaking. Champa was more focused on water and pirate raids, and that alone would make them rather different from the Khmer.

Anyway, I agree that both of them are great choices to add in a future DLC.