1- It really isn’t. A quick check on mainstream media shows how vilified the Iberian sphere of influence is.

2-inded it does, and defeats the purpose of revolutions.

3-nice list, but there are quite a few internal ones on that list aswell up to 1876, so it’s a bit misleading. I need to read on it properly because I have very little knowledge about USA history to be fair.

4- Rise of Industrial America only came proper after the civil war, which again its already quite late per the game timeline, according to a quick peek on the internet. Not to say that they weren’t becoming industrialized, but as a major power in industry its indeed the later half of the 19th century. Again this was covered by the revolutions in game.

Italians: This civilization has been in high demand since the launch of AoE 3 vanilla, personally it is one of the civilizations I would most like to see in AoE 3

I put my money on that.

Not just because it the civ that I would like to see the most out of the possible choices, but because there is a high and compact demand from the fan base.

Really the most people on social networks ask for them, and as we know Microsoft likes money…

Italia or Morocco
Which would be?, which is almost done from the old data?

It depends on when they plan to release it. If it will be after a short period, probably Morocco, since there is already some sort of a civ in the game.

If it’s instead near the release of AoE4, or even after it’s most likely Italians, since they need more time to be designed and tested, and probably will point the spotlight in the internet on the AoE4 game too.

its not a hint, that unit is already in game and we also have cards in the African factions referencing British and Danes.

It might also be that they’ll add the moroccons now, and those 2 are hints on another DLC of European powers, since Danes and Italians are the 2 European civs most requested.

But I’m hofir Italians, and for that they’ll release them with a series of challenges like the USA.

Sounds like exciting things are happening with AoE3. Good stuff here’s to hoping that the title will live on.

As for the topic at hand, I would really like if we got the Danes and Italians but I wouldn’t be surprised if we get the Morrocans.

Completely agree with you. Unfortunately the devs get mostly paid to create new content so I hope they can restructure their inner workings.

Hy guys. I don’t know if everyone noticed it but I made a poll about this argument.

I also saw that some of you already voted, but I mess up with the original post and the poll reset.

I ask to who has already voted, to go there and vote again. I also incourage to voting for those haven’t already.

What would you like to be the next new civ? (Poll) III - Discussion

To read before answering the poll. To keep the poll as unbiased as possible, please just answer the question and don’t post comments on why it should be one civ and not another one. I just want the oneast and first answer that comes to mind to people, I’m interested in the discussion, and there are already plenty of topics dedicated to that. All clear? If instead, you think that I forgot a civ and you would like to see it added to the poll, just post a single comment with just the name of the…

This game also had an active community during that time due to modders adding new civs, units, mechanics and maps (aka: new content) to the game…

So why is the American civil war here. Not disagreeing, just found it strange.

I don’t think you understand that this is bad for the game even if the intentions are good. If we start to include more emerging civilizations from that period like Brazil in this case, people will keep asking for civilizations that should only be in ‘revolution’ mode. I am from Latin America too, and I would not like them to turn ‘the great Colombia’ or ‘Mexico’ into complete facsions. Rather, they should make revolutions more diverse and allow them to become imperial.

It is just a guess. We were never told ‘new civ incoming’ when tweaked cards were released.

Very likely Moroccans. They have units, cards and voice lines ready.
And it’s more likely an “old world” civ with mediterranean architecture like Ottomans (though I sincerely hope they make a new middle eastern architecture set), rather than an “african” one.

I thought the devs didn’t have enough time to finish the Moroccan architecture and that’s why they weren’t added in the African Royals DLC.

i mean you could argue it shouldn’t be which is fair, but the confederates he de facto acted like an entirely different country and the conflict took years to resolve, meanwhile fighting bandits or removing the governor of a single province takes weeks maybe.

Then in that list of 6 Brazilian conflicts you must have included the Ragamuffin War, right? Again, not trying to be aggressive.

Well, if we talk about international conflicts, and without taking into account the wars of independence of each country, Brazil fought much of its early history against Argentina, Uruguay and Paraguay, but more than anything, its arch rival was Argentina (a beautiful relationship , such as that of France and England <3). But if we talk about international conflicts against powers, Mexico is definitely with the most daring record, it has faced numerous times against the USA and some European states.

Then, the rest of the Latin American countries have had at least one conflict against Europe, here I would like to highlight Argentina again, apart from having to confront England, France and Portugal at war openly on more than one occasion, it has had international altercations, perhaps the rarest case against the Sultanate of Sulu and the kingdom of Hawaii.

This is a list of armed conflicts involving the Argentine Republic from the colonial period to present day: (1536-1541) Help from: Charrúa

This is a list of wars involving the United Mexican States and its predecessors. Mexico has been involved in numerous different military conflicts over the years, with most being civil/internal wars.  Spain (1600s–1821) First Mexican Empire (1821–1822) Mexico (after 1822)

what about the european civilization that did do so?

Most of the European civilizations that were overseas empires with colonies in America and / or Africa are already present in AoE 3. Just that detail

I’m not familiar with them but I find it hard to believe they were anywhere near the prominence of the Inca. The Wikipedia page on just the Incan army is far more detailed than all the information on the Jivaro.

The Quechuas were part of the Incas so it wouldn’t make much sense to replace the minor Inca tribe with that. I think adding in the Jivaro as a minor tribe on Upper Andes and Amazonia maps and the Muisca on Upper Andes and Orinoco maps would be the best replacements.

Wikipedia only give general data or with edits with people who have enough time to write articles. I recommend other more reliable sources of information like this one.

Regarding the Jivaros, I give some key points:

They are a civilization that was never conquered by either the Inca Empire or the Spanish Empire (they were never even defeated by them).

In the year 1600 an army of 1,000 Spanish soldiers (and an indeterminate number of auxiliary natives) was sent with the mission of subduing the Jívaros and recovering the territories lost by the Spanish Empire, these Spanish soldiers were annihilated, only 4 Spaniards surviving.

Throughout the 17th century and a good part of the 18th century, Spanish expeditions were sent to subdue the Jívaros, all these expeditions failed, those military expeditions were led by Jesuits and due to the consecutive failures in 1704 the Jesuits were forbidden to arm more missions (although more expeditions were sent clandestinely during the 18th century, all these missions also failed), it was not until 1767 when the Jesuits were expelled from South America that the expeditions against the Jivaros ceased. The Jívaron did not allow any living Spanish to enter (or leave) their territories and it is probably the greatest military defeat suffered by the Spanish colony during the 16th and 17th centuries.

The Jivaro territory has been the source of many legends, such as the well-known “forests of cinnamon and a city made of gold” as was well explained in the Francisco de Orellana campaign of AoE 2 (before the Definitive Edition).

The Jivaro territory, although it was delimited, was not conquered by Spain. It is one of the reasons why there were territorial conflicts with Gran Colombia and Peru, in theory both countries claimed those territories but in practice it was a territory not yet conquered; border conflicts continued even after the separation of Gran Colombia (The last conflict over these territories happened in 1995) 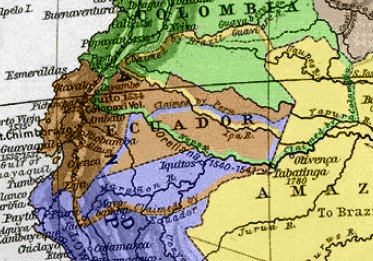 Finally: the Jivaron have appeared in various media such as movies, books and video games (as in the case of Blizzard games).

In my perception, the Jivaros have enough history and personality to be a Major civilization in AoE 3.

And regarding the Quechuas: The Incas were an empire, the Quechuas are an ethnic group that played an important role during the colonial era in South America.

I just played a game with the etiopians, and I used the new Italian HC shipment that gives 3 great bombards.

Now, maybe it’s nothing, and it’s just my desire of seeing the Italians introduced, but I noticed that the tre units spoke Italian.

Now, I don’t remember other units that hade Italians lines in the game, so their addition might hint that way…

Now, I don’t remember other units that hade Italians lines in the game, so their addition might hint that way…

There are a few that speak Italian, all of them mercenaries.

I am pretty sure the new civ is going to be Morocco, since we were supposed to get 3 civs in the DLC but got only 2 instead. It could have the same mechanics as Hausa and Ethiopia, or it could have something new entirely.

Italy is also a strong contender though.

Little bombards and Elmeti have always spoken Italian that’s nothing new. Not sure if they have the exact same voice lines though, I never build them that much.