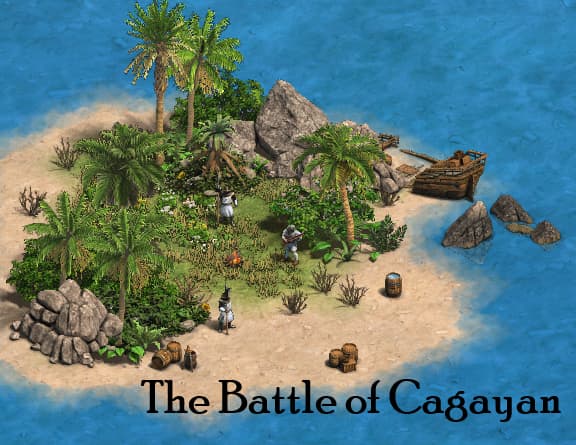 Pirates have taken over the north of the island of Luzon and threaten Spanish trade with Asia. In this campaign you will control General Carrion, admiral of the Spanish fleet in the Philippines. Your objective will be to drive out the pirates from the Philippines and restore Spanish sovereignty over the area.

This campaign includes a special recruiting method and unique units that will be unlocked as you progress through the story. Good luck!

patch 1.1:
-Added some units in the Wako camps.

-Added some units in the Portuguese colonies.

-Now at 70 minutes a big Wako army will attack your base. Deafeating them first will stop this attack.

patch 1.0:
-Fixed an issue where the trigger to convert tribal chiefs was activated when bringing another chief to the area.

-Tribal Chiefs will now pass to Player 3 when converted.

-Drydock Tech can now be researched by visiting Player 7.

-Added a secondary mission in the place of the monk, upon completion you will receive a relic.

-Now when defeating the pirates in the area and saving the village to the north of the island, bracer will be investigated automatically.

-Several towers were added on the coast of China to prevent or make it difficult for markets to be destroyed from the water.

-Nerfed the army of the Chinese villages as compensation.

I will check it out hehe

-Added some units in the pirate camps.

New version will be available soon.

-Nerfed (a lot) the pirate offensive.

-Now you will be warned 30 minutes before, so you have more time to prepare.