Hi, guys! My previous poll about possible African civs seems to be a success (New African Civs Poll), so why not have a look at another region I think should be gettig a DLC - East Asia. I have compiled a list of the civs I have noticed being requested. Have a look and vote for your favourite 3.

P.S.: Some people seem scepticle about the inclusion of some of those civs because of the Chinese government’s stance on certain issues. However, this appears to only be the case for representation in the current day and age, while including nations such as Tibet, Manchuria, etc. seems perfectly fine for the Medieval period.

If you vote Other or Split Chinese in 2, I’d be curious to know more :]

Tbh the name would be the harder part. Although I expect something like Cantonese vs Pekinese

Either way I dint think that dividing China is necessary

You know, I never really thought about it before, but given their longevity and major cultural influences the Mon people actually might be a good addition to AOE1 as another eastern civ there, if the devs would ever come back to look at it.

I know, that’s not realistic, but still. A guy can dream… (or mod, but I’ve got no experience there so…)

The Mon in general were extremely influential for a long time. If they were more known they would have probably been added

I think something that could be a.good idea is to split the Malay

The Mon in general were extremely influential for a long time. If they were more known they would have probably been added

Yeah. It’s sad how many good civs could be added in that game, and how much it could be expanded upon within the framework it lays down, but due to the launch it was abandoned and never expanded upon.

I think something that could be a.good idea is to split the Malay

Malay and the Javanese at the minimum would satisfy me, putting a split between the muslim-influenced Malay Peninsula and N. Sumatra, and the Hindu-influenced Java Island and S. Sumatra. Sumatrans and Borneans would also be nice if we’re allowed to have post-48 civ additions.

The Mon are definitely an interesting pick, but they never really had a true empire, did they?

Anyways, so far the top 3 picks are really running away with it, so if the devs do decide to make such an expansion, it should probably be those 3.

While yeah they werent as expansionist as the Burmese, the Thai, the Khmer, Malay or Javanese, they still lasted a long time and had multiple important kingdoms, like Haripunchai and Pegu.

Although they are just way too obscure to be added

Tangut are always suggested as an alternative name for Tibetans, but weren’t they different enough to be their own faction? Sure, their most prominent and well documented state, the Western Xia, only existed for two centuries, but that’s kind of what happens when your on the Mongol’s invasion route, and before that they held against the Jurchen Jin, the Han Song and the Khitan Liao.

Anyway, if the 48 civ cap can be overcome, I think East Asia should probably be taken care of in at least two different dlc, with one focusing on China and the other being kind of a Rise of the Rajas 2.

but weren’t they different enough to be their own faction? Sure

Indeed, they are.
I’m one of those in favor of inluding Tanguts to bypass the CCP matter, and my view on it is that a Tanguts civ could be used as an umbrella for all the tibetic peoples: 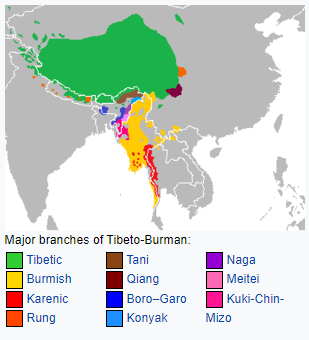 Since Tibetans is what people really want, these Tanguts would be designed almost entirely as it would be a Tibetans civ, with some tanguts elemnts throwed into it. The history section would talk about tanguts but could extensively talk about the tibetan empires too, with proper caution on what is said.

This way what is officialy presented is a Tanguts civs, but we, the fanbase who is asking for the civ, know that behind the scenes they’re actually mean to represent tibetans mostly.

Hu… This map seems to be about the modern-day repartition of Tibeto-Birman languages, not medieval, and the Tangut cultural area is in the grey part northeast of Tibet, it’s not included in the green area, since the Tangut language is now extinct, so I don’t think this map is of any use. I don’t think civs should be based too much on linguistics anyway, but if you look at Tangut and Tibetan languages’ classification, you can see that they’re as far away from each other as they are from Burmese, so I hope you’re not asking for the Burmese to be removed from the game and brought back into the Tibetan umbrella as well, right?
Anyway, when I ask for differences, what should matter the most in an AoE game should be martial tradition, more than ethnolinguistics (even though the later is a matter I’m really interested in, it’s just not really the game for that). I’m no expert, but reading the discussions on this forum gave me the impression neither of those two civs would represent each other really well on that regard. Maybe I’m wrong, and I would be glad to be corrected in this case.

It is. I took it from the wikipedia article on tibeto-burman languages. It is there to ilustrate that there exist a tibetic branch of that language family, just to mention that the Tangut language belong to that group.

so I hope you’re not asking for the Burmese to be removed from the game and brought back into the Tibetan umbrella as well, right?

The umbrella would cover the tibetic branch only, not the whole language family.

Anyway, when I ask for differences, what should matter the most in an AoE game should be martial tradition

Yes, I agree, but this is the only way I could see tibetans included the game.

Jurchens: no current civ can represent them at the moment, an important people in medieval Northern China who founded the Jin Dynasty. Could be a civ that focuses on both cavalry and infantry.

Tanguts: another important people in medieval Northwestern China with no representation, a missing link on the Silk Road. Could somewhat represent the Tibetans (who are unlikely to be added into the game). Could be a camel civ similar to the Gurjaras, could share the Camel Scout unit with them.

Siamese: a crucial SE Asian civ in the late medieval period with no representation. They were the people that ended Khmer’s dominance in the region. Could be an elephant and gunpowder civ with an unique upgrade to the Elite Battle Elephant and with the Castle UU being an elephant with a gun or small cannon on its back.

Nanzhao/Dali: can represent the various Non-Sinitic tribes in Southern and Southwestern China, who don’t really have a representation at the moment. It was an important regional power in medieval East Asia.

Chams: a maritime power that rivaled the Malays and the Dravidians at their height, known for their piracy in the South China Sea, attacking unsuspecting merchant ships. Also fought the Khmers, the Vietnamese, and the Mongols.

Could be added if we have enough space, but not really a priority:

Unlikely to be added due to political reasons:

Split the Chinese civ into 2

Tibetans and Tanguts could do well. Plus maybe remake the Japanese while being at Asia.

I’m surprised it’s not an option in the poll… but Filipinos would definitely be neat option.

(Note: before posting I found out they’re related to the Khitan, or they’re the Khitan idk)

Maybe Emishi too, though we don’t know what language they spokw (they could use Ainu language since they’re thought to be related), they could appear in a Japanese campaign.

I’m sorry to tell you that, but you’re reading this map extremely wrong. The Tangut language isn’t on this map, because it’s extinct and this map only show the modern-day repartition of those languages. Yes a Tibetic branch exists, but Tangut isn’t part of it.

Here’s the linguistic classification of the Tangut language:

And here’s the same thing for Lhasa Tibetan: 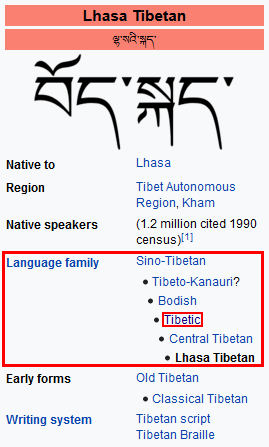 As you can see, those two languages branch out instantly, only sharing the Sino-Tibetan language family while the Tibetic language only appear three branches down the line only for Tibetan.
For the record, here’s Burmese just to show you I wasn’t exagerating when I said they were as far away from each other as they are from it: 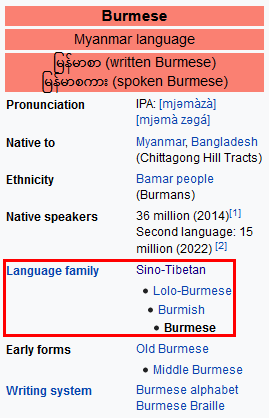 For the record, it also means those languages share as much similarities as English and Persian, which are both part of the Indo-European family, so I’m sorry but linguistics really isn’t a good argument to use the Tanguts as a stand-in for TIbetans, and I feel like aside from the fact that they don’t exist anymore Tanguts deserve to be in the game as their own faction as much as Tibetans do.

I am in favour of adding both Tanguts and Tibetans as a seperate civ.

Both are different as Tibetans would be a Cavalry and Monk Civ while Tanguts a Camel and Siege Civ.

Tibetans would have trash siege and no camels while Tanguts would have mediocre cavalry and monks.