I think that in the distant future there should be a Central European DLC (German) that would add some new German civs (including Swiss). Catalans and Venetians could also be in this DLC or in Mediterranean DLC (with Magreb civs and Semitic civs).

Actually, venetians may be on the Duchies DLC, since tecnically they were one (doge is the venetian word for duke), and they had close relationships with the east.

Not saying that they should, just that they might, depending on how many civs (if there’ll be civs at all…) are present.

I agree, we don’t need European tribes, we need African Empires who were actually important in the history, unlike Finns or Estonians. The community has spoken, the majority wants empires, not duchies and minor people.

I am sure that we will get more civs from all parts of the world, but there are simply much better choices than most if not all of the suggestions you gave in your reply to me.

There is actually! However none of the come from Europe but from Asia (and theres a ton of Asian civs to talk about) unless talking about the already comfortably represented Poles.

Your ignorance of European history is not a valid point of argument. Calling things dumb doesn’t validate your points.

I have a really thick book about European warfare during the middle ages and I have read it twice. I think I know quite a bit of it so unless you can mention something as a counterpoint. I really have to justify why comparing tribes that didnt do much to powerful long lasting kingdoms just because their conquest was interesting is a dumb idea? The Kanembu were considered one of the most powerful states of Africa being at the same level as Ethiopia and Morocco and were a kingdom that last more than a thousant years with an 800 year long dynasty and an interesting history in general, Nubians fought off the Arabic invasion of Africa, Somalis were able to fight on even ground against an Ethiopian-Portuguese aliance, Songhay were extremely powerful and had an university that made people from all over the world come over for education, the Yoruba and Hausa were majors productors of resources for the world at large just like Mali. The Finns were a bunch of tribes that never had an independent state nor did anything impressive as far as I know.

You are in a minority of people who would rather see obscure tribes/civs added, rather than civs and events that were present during important parts of history

I havent mentioned a single tribe, I have mentioned a bunch of powerful states with a huge influence on their regions and importamce to the world trade if not important civs on general to the world st large in the case of Somalis. These civs were important in their own way, you just dont get the appeal since most of what these civs did never influenced Europe or Asia.

There are new civs in it. Adam Isgreen said so. We don’t know which though

From the polls on this forum
Poles, Swiss, and Armenians are all top civ requests. The earliest African civ is number 5, Tibetans are the first civ request.
I also see no poll about what the community wants based on dutchies/tribes, opposed to empires, so claiming that the community is spoken is jumping ahead of yourself, don’t you think?

One of the most requested civ/civ region in this English speaking forum is actually North American civs which we got none of so far.

Juggernauts poll I am referring to. Iroquois is a top civ on his poll as well, I think 6 or 7

[Poll](Updated) Which civs would you like to see in the game? (All popularly requested civs included) II - Discussion

Updated the previous list by removing some redundant civs and adding some new ones. Also made a map accompanying the list: [image] Symbols represent the civs already in-game, texts are the new civs being requested (in the list below) Choose the civs that you want to see in Aoe2 (in bracket is the approximate population of the ethnicity today followed by the area of influence of the particular civ, click on it to see the map) poll Please consider sharing this poll to as many friends as possi…

I would like to add that we already have an Iroquois unit in the game: 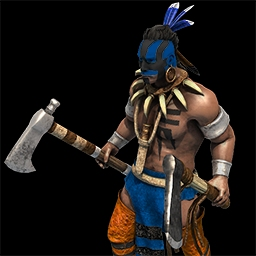 The Iroquois Warrior is an untrainable fast infantry unit in Age of Empires II: Definitive Edition, with stats identical to the Woad Raider. It appears in the Vinlandsaga scenario under the name "Algonquin Warrior", replacing the Skraelings' Woad...

Hopefully in the near future, this unit will become the UU of the new civ - the Iroquois who will be part of the American DLC.

Dawn of the Dukes:

Rulers of the Caucasus:

Not a regional power

Thats also stuff that comes from outside the timeline by a lit of time and still doesnt justify adding random civs.

Yeah, I also dont think we need covered every country. Lithuanians can cover whole Baltic people (I still think it would be better to name them “Balts”, not Lithuanians).

Never a part of the HRE.

Treat Venetians as a nice bonus

N but the Duchy foght with the Golden Horde by a lot of times.

In any case, there isn’t room for all of those.

The maximum amount is 50 civs, meaning that just 13 more is the best we can get.

Why the maximum amount is 50?