So now, all users are forced to be open beta testers?

What I mean is, unlike other games, this game organizes closed betas, so it won’t be as effective as an open one. Especially since all the beta users are restricted to their own numbers

have not tried this myself, but removes menu animation is a good thing.

Hate it. Why did it have to change, FFS?

Was anyone asking for this?

The old menu was fine, as were the play modes.

The new CIV PICKING menu is BETTER, but too slow. There is lag between clicking to load and close the screen and that action occurring. I also don’t need to CONFIRM my selection after I’ve selected a civ.

Likewise EVERY menu “lags” between loading. It’s not even an animation so much as a fade in that just delays where I need to be.

Especially because it now takes MORE CLICKS to get from the main screen to My Goal. It’s unintuitive. Most especially to get into replays, mods, and multiplayer games.

Although I thoroughly dislike this new menu I voted make it optional since there might be people who might like these new changes. To be honest I miss the old AOE2 main menu, it had a distinct medieval vibe to it.

Some in-depth feedback and suggestions regarding the overall user interface:

Problems with the modern UI in general:
The new UI, and I don’t talk about the main menu alone, I talk about the modern mobile-game-ish UI, has a few problems. It contradicts with the general UI design philosophy of the game. Most menus are held in this oldschool paper background design. It is clear, easy to read and makes a good overall impression. And then threre is this new UI with huge all-caps fonts, huge buttons etc… It’s not ugly but it wastes so many space if you compare it to the oldschool UI. This is a PC game, played mostly in high resolutions and this screen space should be used. Apart from looking a little clumsy, it also doesn’t fit the historical setting of the game as much as the oldschool UI. 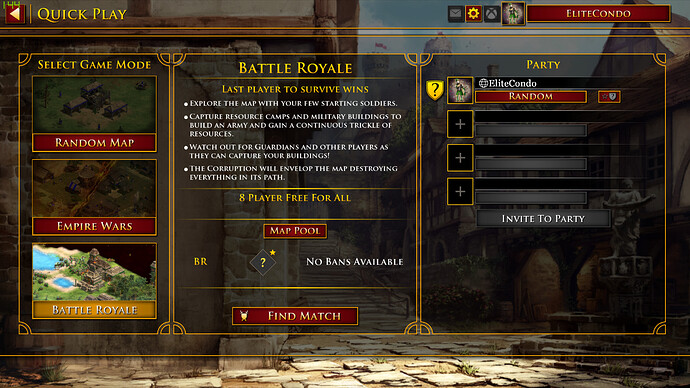 Animations:
For me, transition animations are completely unnecessary. I wouldn’t mind them being in the game though, as long as you can turn them off somehow.

Civilization selection menu:
I really like the new civ selection, however a few things could be improved here as well: 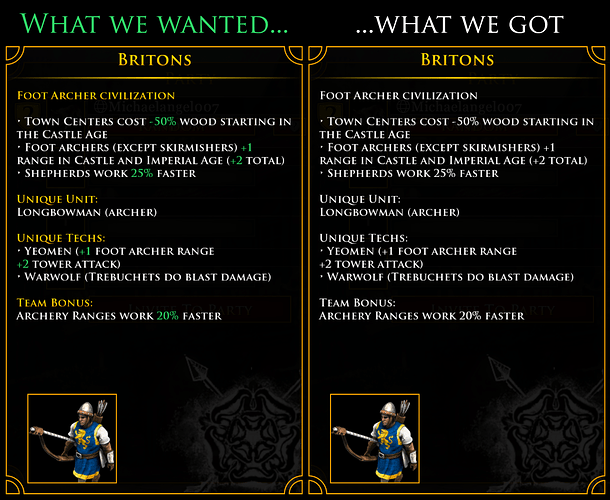 Campaign Screen:
The campaign screen is absolutely amazing. The only thing which could be changed is to remove “The Art of War” and the “Historical Battles” from there. It makes no sense to have them besides person-centered campaigns positioned on a world map.

“Historical Battles” should definitely be accessible via the main menu. Some people even asked on reddit or here on the forums if the the historical battles were removed because they couldn’t find them after the November patch.

“The Art of War” and should be selectable via a new “Learn to Play” selection screen alongside with the “William Wallace” learning campaign.

History Screen:
In comparison to older versions of the game, the history screen is a step backwards. The old UI not only fitted better into the game, the readability was also better, because you saw much more text at once. 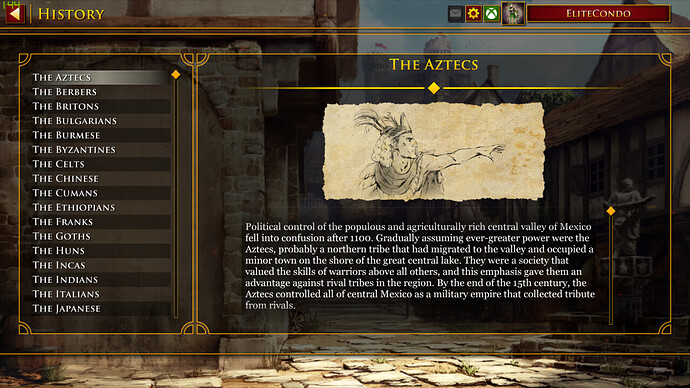 This topic has already been discussed here:

[Suggestion] Make History as readable as in HD II - Discussion

Main Menu:
Designwise I can’t really make helpful suggestions as I’m no graphic designer, but I can make some regarding the structure:

Screenshot 2020-11-24 214005843×421 7.67 KB
In my opinion the above displayed menu items are essential and should therefore be directly accessible to the user. Right now, some of these items are hidden behind a little gear symbol, where you would normally expect to navigate to the options menu… not optimal. The “Learn to Play” button should lead to a screen like the campaign selection screen with fancy background etc. where you can access the “The Art of War” and “William Wallace” learning campaigns.

It has already been confirmed that the devs are working on a menu to access all the challange scenarios (Mongol Raiders, Barbarossa Brawl etc.). With this addition, there are a lot of options you could select if you want to play a singleplayer mode. Maybe these items could be merged into one main menu item leading to a submenu (only if it would overload the main menu too much).

The “News” button can be positioned like in the picture above. It’s a button you hardly ever click, so it doesn’t has to be as big as it is right now.

Conclusion:
In my opinion it would be better to discard the modern user interface completely and use the oldschool UI design, which is already used in most places anyway. The new UI feels more like a mobile game UI and doesn’t fit AoE II well.

Ok, now enough of those words. Thank you so much Microsoft, Forgotten Empires and Tantalus for constantly updating this amazing game. I hope that this review is at least a little helpful.

Great work mate. Can you also include to remove the redundancy of William Wallace in Europe Map where we could have a new Britons campaigns instead of Celts. The iconic William Wallace will remain in the Learn to Play tab alongside the Art of War.

Also we need more font varieties besides Sans Serif, a fitting font to add would be a Medieval Font/Gothic for the Menu will be great.

I havent started the game, but i hope this will be an improvement to the UI.

I think the William Wallace campaign has it’s place on the world map as it fits in with the other campaigns. For me, the two font options are fine, but of course more of them would be cool but not that necessary.

Amazing summary! This pretty much includes the major complaints about the current UI. Could this be linked in the original post? (New Main Menu and User Interface) @BomberGriffin

oldschool paper background design. It is clear, easy to read and makes a good overall impression

new UI with huge all-caps fonts, huge buttons etc… It’s not ugly but it wastes so many space if you compare it to the oldschool UI

Conclusion:
In my opinion it would be better to discard the modern user interface completely and use the oldschool UI design, which is already used in most places anyway

“Historical Battles” should definitely be accessible via the main menu. Some people even asked on reddit or here on the forums if the the historical battles were removed because they couldn’t find them.

And it always bugs me to find Historical Battles under African campaigns. While it’s a convenience thing, it gives the false impression that all historical battles take place in that area around Mediterranean.

Thank you, I really appreciate it!

I don’t really mind the design, maybe they need to at least put some colour in it, but man it takes too much time to load every interface

The new menu is seriously bothering me. Putting aside its ugliness (my subjective opinion), it is also deceiving. Seriously, if you want to find a replay, you have to go like “Single player -> Load game -> Replays”. This is absurd. The previous menu layout was almost brilliant. Please, give us back the previous layout - maybe fine tune it a bit if you want. Just get rid of the new one.

I find it very counter-intuitive. If you want to watch a replay of a ranked 1v1 you just played you have to click “Singleplayer” and then “Load game”.

Also, it requires more clicks now than before to enter into a ranked queue with this new pop-up concept.

Why is the History tab moved underneath the settings cog? Why do I have to click through a menu AND confirmation dialog every time I want to resign or leave a game? Were people resigning by accident? Where are the attractive shield buttons dividing singleplayer and multiplayer that the game has had for 21 years? The old UI was clear and laid pretty much everything out in front of you, If I was a new player, I think I would struggle to find the mod manager or spectate a game. Literally nobody needed the UI to change.

Also, Quick Play features huge “+” icons next to each player slot that do nothing when clicked. I took a single design class as an undergraduate, and even I know better than that. Don’t make things that aren’t buttons look exactly like a button

There is a bug in the new UI where some radio buttons disappear if the language is set to French. Please check:

How to ban map in TEAM quick play? II - Report a Bug

There are civ-specific units/sprites/graphics for fortified towers, stables (Aztecs), etc. That’s what adding content to the game is called. African monks are another sprite that should be added.

Looks like the developers haven’t played the game before rolling their updates.
The new UI is simply horrendous. I’ve been playing this game since 2003 and honestly, I couldn’t care less for flashy big a++ icons UI.

Imagine, if you were to drive a car, but and regularly the dashboard of the car keeps changing because the developer “could” potentially update it to his liking and he decides to move around the steering wheel; puts a square instead, and then shuffles the pedals for the sake of a trivial update. I know this is a poor example, but its that is how I feel regarding the UI.

Is it really that difficult to rollback the UI to its previous state. It is distasteful to a whole lot of players.