In this last year I discovered the Total War franchise. And one thing I really liked (apart from the massive battles) was the campaign map. I was wondering, if somehow this could be used in the Age of Empires franchise (i really like the AoE style of battle/missions), even if ran away from the “History and Standard Campaigns”.

In this post I’m suggesting an idea and asking your opinion on how this could work (I think so).

It would be something like world domination on a world map. Where depending on the chosen civilization you would have to go a different path (similar to Total War) however the missions would take place in the Age of Empires style of play, building a city, training an army.

At first I thought the influence of the map of campaign over missions would take the form of resources or troops. For example: if you are going to fight a battle in your territory or an ally, somehow you should have more access to resources or start with military troops or villagers.

Another example of campaign map influence would be: if you have allies or enemies they could join you in battle/mission.
Another kind of influence from diplomacy
Example: If you are an Islamic civilization and you ally with another Islamic civilization you would receive a bonus (attack or HP) against cruzades civilizations.
Or if you have chosen a European civilization and allied with an Islamic one, you could use one of its unique units or technologies.
In campaign mode we would decide the diplomacy and which territories to attack or occupy.

That was an idea that came to me just now. What do you guys think?
I think this could give a longer life to the single player mode (which is what I play the most nowadays).

Sorry for my english.

You should try rise or nations game.

Beautiful idea It would be a Great add for the next AOE game. You can see something similar in Company of Heroes 3.

because even in the biggest map size in AOE2, “world maps” have this problem of most of the landmasses being small, like britain is non existent in these world maps, is still small for gameplay

Not like this, is more like today’s campaign map, but Just more interactive. Not Just selecting missions/battles.

The kind of map u show should be the missions/battle map. I’m sure you’ll have a fun time making maps in AoE4 (that is , if it doesn’t follow the footsteps of AoE3 in this particular aspect)

Yes, like the turn-based campaign in “The Battle for Middle Earth II” - When u play the battles realtime rts style, but you move your troops on the strategic world map like in TW. Splendid idea! If that is included - i’ll buy the game just for that mode.

PS: Plus “RELIC” has experience with these type of campaings - “Dawn of War - Dark Crusade” and “Dawn of War - Soulstorm” have this idea incorporated like the main campaigns of these expansion packs. So story driven campaigns, plus a strategic campaign - now for that type of content - i’ll be willing to pay 60 euro. Strategic AoE campaign would be a blast to play. Also imagine the multiplayer aspect

. Aw man aw man. U are a messeger of God my friend. Spread the word of Jesus. Hallelujah 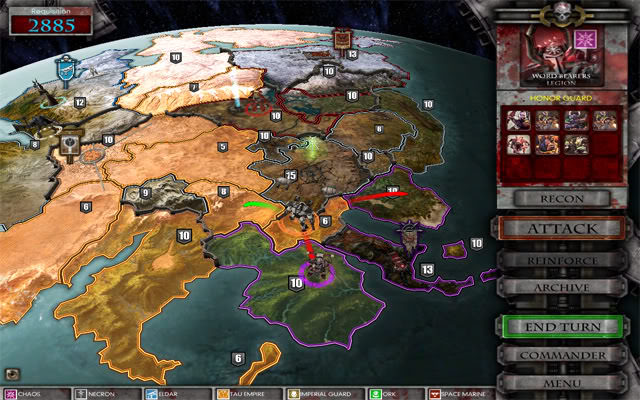 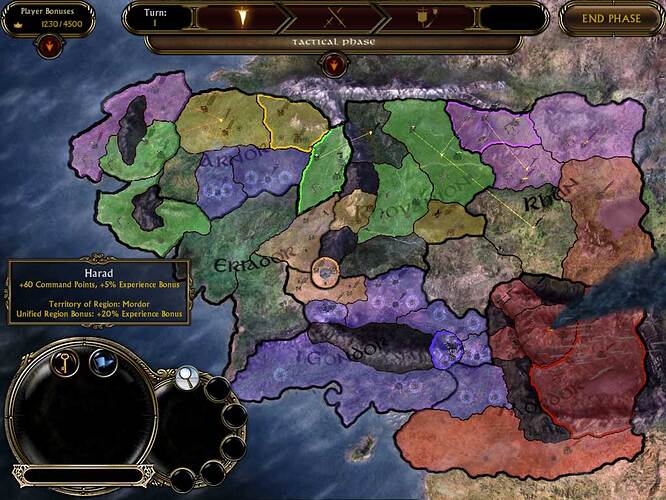 I enjoyed games like ‘Risk’ and ‘Defender of the Crown,’ and I’ve always wanted AoE to have a SP mode where you conquer a world, thus making an “empire.” (But doing so via SP random map type matches; not the pre-programmed campaigns.)

As it stands, SP games in AoE are isolated islands in time. You play one game, view your stats, reset, then play the next SP map. Rinse and repeat. Multiple matches are not connected in any way. You don’t even accrue an ELO or long-term stats. The only long-term stats you can see/find are through looking through Steam achievements. But you’re still not building an “Empire,” per se… just a town; and the in-game SP (non-Campaign) experience is just random map after random map.

AoE4 “towns” can feel more like an empire, with their large walls, but conquering a region or world would be a next step of coolness.

In the context of AoE, I envision the four map edges being one way to access/connect to adjacent territories for you to conquer. Not the only way, of course, because I’d want an overhead regional/world map that you can view, too (similar to the Campaign maps), but one way anyways.

Here’s some thoughts I shared in the past. My idea has probably morphed a little, and I didn’t explain/clarify things at length due to it being a forum post, but the foundation is here. I wonder if this is kind of what you mean…

An idea I had years ago, in addition to my earlier neanderthal Dark Age thoughts, was having Age of Empires be, well, about creating an empire… instead of just a very robust city or small group of cities on a single map. To achieve this, my idea was that the map you play on (which is a typical AoE2:DE match) is just a small piece of a larger, connected game world map. (Connected by way of land area; not necessarily by way of Internet ;) ) As you win each map match, you get control of another …

@Darkness01101 So u are talking homm3 style? Nah imo its better to have an already pre-build and very well polished map of lets say Europe or Euroasia and a functional AI. Random maps are cool but that mode is for purely turn-based strategies like homm, king’s bounty, disciples etc.

True bro I really agree with you statement

@Darkness01101 So u are talking homm3 style? Nah imo its better to have an already pre-build and very well polished map of lets say Europe or Euroasia and a functional AI. Random maps are cool but that mode is for purely turn-based strategies like homm, king’s bounty, disciples etc.

I’ve never played Homm3 more than 10 minutes, so can’t say for sure what you mean. (And in that 10 minutes, I saw nothing of what I’m talking about.) But my idea also includes pre-built/very well-polished maps in the overhead view; and conceivably for the actual maps you play on, too. I’m not intending any limits with how the maps look or how set-in-stone they are… I just think I’d prefer random maps for the matches, is all. With Defender of the Crown, you get that same overhead map of Britain, for example. In the sense of AoE, when you dive into the actual match to take over a country, territory, etc., then it can be either random or pre-built. The main part of my idea was a yearning for conquest of a larger map area (like Defender of the Crown) through multiple single-player (or co-op) matches. And I don’t want it or mean for it to be turn-based in a typical/classic sense. At any rate, there’s a lot to the idea, and a lot to flesh out. Is impossible to lay it all out here… so we’ll just leave it at that. I just didn’t want it to get pigeon-holed into some Homm3 game I’ve never played, Total War, or anything else and dismissed as such. It’s okay to dismiss it, but I highly doubt Homm3 or anything else really encapsulates what I’m thinking

@Darkness01101 Ah i just saw this game u are mentioning - Defender Of The Crown, and its in the sense of what i am talking. If you rather mean the map(battlefield) u are playing in rts mode to be random then yes, that is what i am also after

Yess! Exactly, Lyvione. Sounds like you understand my words now

I think we’re on the same (or very similar) page

Thats literaly DoW - Soulstorm and Dark Crusade. U move your troops like on a chess board on the strategic map, and when u attack a teritory the game transitions to the rts gameplay with a randomly generated map ( or maybe they are rather fixed maps in DOW but random is better or “unknown” - lets use the aoe wording. We are on the same page i think

Oh, nice! And I see Relic made those… so it seems AoE is in good hands if that game mode is ever to see the light of day!

They may actually help be a proponent of it

…it would take a bit of elbow grease …but i could see that being a solo “campaign” type…or dare i say even maybe a co-op option. totally new macro/micro scale hehe…

hopefully it could even include circumnavigation…and freedom to attack anyone at anytime, instead of being “on rails”