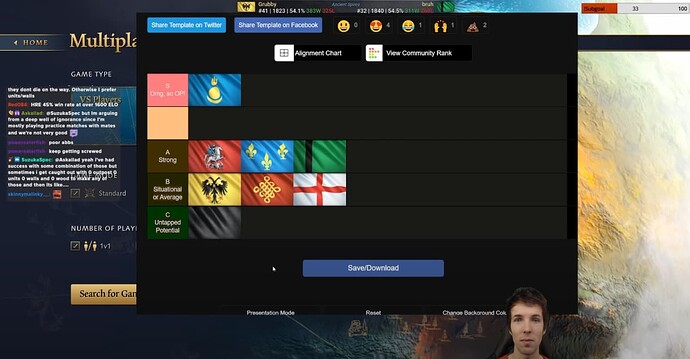 Interesting to see how opinions differ. pls have a link？？

Added link above. It is stressed that it can be map dependent etc.

But actually delhi has a high chance of winning in the latest version, but I don’t know why,

Not every player will base it solely on the statistics I guess. Beasty said this was his view at the highest level.

I don’t take things based off statistics too seriously right now, as a lot of people are still developing metas for a lot of the civs and as such more people will play then which in turn will naturally increase their winrate.

Or simply some people just focus on one or two civs at a time. I didn’t start playing Abbasid until last week, but I absolutely slaughter with them.

I still think they need a lot of changes and fixes, I get slaughtered just as easily bc of the two landmark handicap.

But yeah maybe more people are getting comfortable with Delhi and that’s why we are seeing the increase. Also the spear bug was a -serious- handicap for both Delhi and HRE, with that fixed these two civs can actually defend themselves against knights and FL

Maybe he’s talking about top players, he has a low opinion of France, but I actually think France is great

France to me feels… idk how to put it, basic?

I just don’t have fun playing the french, like yeah they’re decent and have a good military composition in early middle and late game, (I don’t play water maps and if I am forced to by quick match I usually choose France, simply bc everyone else is going to and I need the hulks to survive) 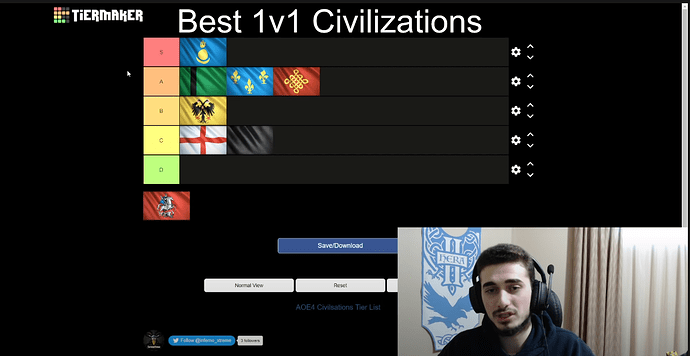 I would probably go with Hera tier list. However it’s too early to say because the meta hasn’t settled in yet.

Age of Empires 4 Analytics site focused on 1vs1 games 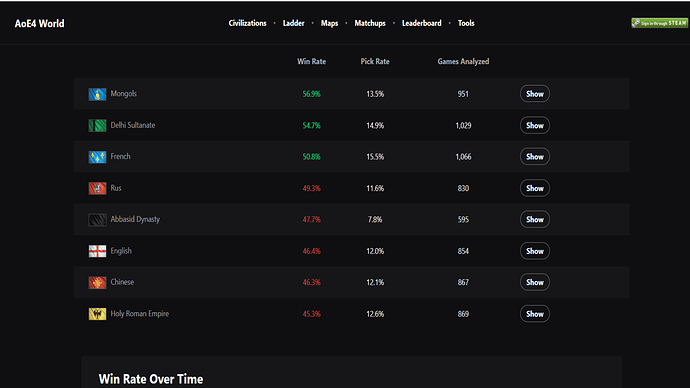 Delhi win rate is up probably because people have figured out they’re super dominant on hybrid maps, and just don’t play them on true land or water maps where they’re clearly bottom tier. It’s a frustrating situation, because they clearly still need a lot of bug fixes, landmark improvements, and imp research buffs to make all their various capabilities work correctly, but every one of those things just makes them even more dominant in hybrid.

The more a civilization is picked the more maps it is played on, so no, Delhi is doing well off hybrid maps (Rus and China are also good on hybrids) except on pure water (which is irrelevant).

The Tier List is very subjective (except in the most obvious things) so it is best to know how to read the data and base yourself more on that.

Tier lists should be over all strength of civ and not based on single type of map unless specifically speaking for one type of map.

The higher the elo, the better Delhi get. They have the second highest win rate in every elo above 1300

We’ll have to see how animation cancelling is contributing when it gets nerfed.