Today, the age of empires team posted this Sage of Empires article on the main page and in social media: Tea Pets: A Teatime Companion - Age of Empires 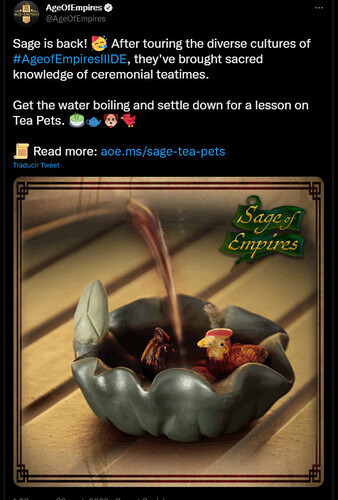 On discord some folks have been trying to theorize what could it mean or what is coming: from new Asian civs to an export rework. All speculation, but is fun to guess!

What could this mean in temrns of new content for the game?

What could this mean in temrns of new content for the game?

Sounds a lot like an event for China or for England, maybe Skins for the English?

That’s a Chinese bowl. The chicken I’m not so sure. I hope they buff china,they need help.

Am I doing it right?

Both Chinese and English got already Explorer skins and events

Both Chinese and English got already Explorer skins and events

True, I had forgotten that the English already have skins.

The export/consulate system has so many flaws, so a rework would be very welcome. Getting rid of the Asian’s reliance on Europeans for artillery and having an alliance system more similar to the Africans would be great. Maybe something like the Chinese tributary system could replace or augment it.

For specifically tea themed features, a Tea Plantation for the Asians could be one option they might go with. It could be a way to ramp up export production and would make more sense than Rice Paddies that do everything.

A Teahouse replacement for the Monastery/Tavern would be another change that could be made. I suggested something like that here:

It is classified in aoeIV, and the article also says “medieval war”.
I hope my opinion is wrong

I’d also like if they removed the monk heroes and replaced them with regular military leaders.

Implying The Asia dlc is in coming

Let’s be real, YOU ARE the sage.

just give consulates to usa, mexico and malta pls, instead of that wacky wood costing cards

That would be ideal but there’s a but there’s less of a connection to tea like they’re hinting at here so I don’t want to speculate too wildly.

Anything relating to Persia?

I just ask for a buff for lategame to indian consulate. Its annoying that they havent any long term bonus