New TEUTON UU, Let's get it 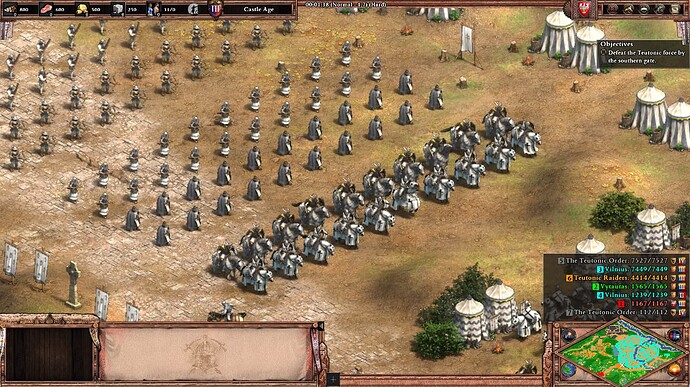 Screenshot (46)1366×768 224 KB
See these bad boys? CRUSADER KNIGHTS - they’re called. They can be another Teuton UU just beside the meme TKs without any actual change.

LoL, I think this unit isn’t broken, not even close. But it definitely looks cool and actually is a mounted ETK. This unit should be unlocked AFTER doing ETK upgrade. That makes ablsulute sense.

LET’S BREAK THE FORUM GUYS- “DEVS WE WANT IT”
upvote, comment and glhf

And I want a Teutonic order campaign too. Let’s not forget a Polish king invited the order there to help deal with Prussian pagan raids for slaves.

THEY WERE THE GOOD GUYS

At least for a while

I want teuton order pikeman and xbows too,maybe an official mod to replace the current skins.

ty man. Ilike it too

ya, let’s try gather more people to shout out to devs

As a point: Teutonic Rider can be a step in the Knight upgrade lane… What do you think?

it’s a fancy idea honestly, since they don’t have an elite upgrade and would be horrible vs halbs with only 100 HP. They would be more of a meme unit, than 100% competitive

i could immagine a similar implementation as with flaming camels: researching the imp UT gives acess to them as side effect. Castles would still get +3 range, but that extra effect that infantry grants extra arrows when garrisoned would be thrown away, nobody uses it anyways. Might need a slight name change, i’m sure Ornlu would come up with something fitting.

Let’s not mess with the genius already created by Ensemble Studios and Sandy Peterson. Would you try to improve the Mona Lisa?

So, art dies with the Mona Lisa?

so tk then is a mix of bojar and konnik?

a mix of bojar and konnik?

boyar, slav uu, in german they are called bojar, that’s why i wrote it like that

I’d pay 20$ for a DLC only adding this unit to the Teutons’ civ for multiplayer.

I want teuton order pikeman and xbows too,maybe an official mod to replace the current skins.

I will say what I have been saying for quite some time now, we already have an Elite Teutonic Crusader knight on horseback, it’s called the Paladin. We just need Uniqe skins for each civ! Teutonic Paladin , Frank Paladin = Hospitelar skin, British , Italian , Sicillian cavalier = Templar skin and so on. As well as African, Asian, steppe , messo skins for each civ. Purely visual thus it won’t interfere with gameplay but it is something sorely missed and that I will happily pay for. I don’t have time to set up my Historical Accuray mod each and every time the game gets updated, so the time has come to request these beautiful skins to be added to the base civs as default.

Is this an edit of the Vietnamese scenario?