No. Having natives sending shipments from their living room to their doorstep is the dumbest thing anyone has come up with.

C’mon people already have a million ways to justify Ottomans in the vanilla where the game only contains Americas. How is “justifying” anything in that time period even a problem?

I mean honestly now, how often do you use a revolution?

I often revolt to Romania, Hungary, or Indonesia.

Cetbang Cannons and an ever increasing number of War Elephants shipments, is quite strong.

If Indonesia had better Eco, it could actually compete with Imperial Age.

Because the us didn’t existed in the frame of the game until they, european settlers, revolted from their european power. And ottoman is easy: expand the game to asia and europe with civs that fit the game instead of adding a civ that was born in 1776 and was really the british revolting against the british

Poland, no thanks, I think it isnt requested that much either. I only see Italian posts.

There is literally a Poll in these forums, with Ethiopia, Persia, Poland and Italy at the top.

Since the releasing of the latest Aoe2 DLC, it arouses much discussion about the probably incoming DLC of Aoe3. How about let’s count what civ you want. Forgive my ignorance to American history, so i didnt list any native civ below. poll Please let me know which civ i missed. 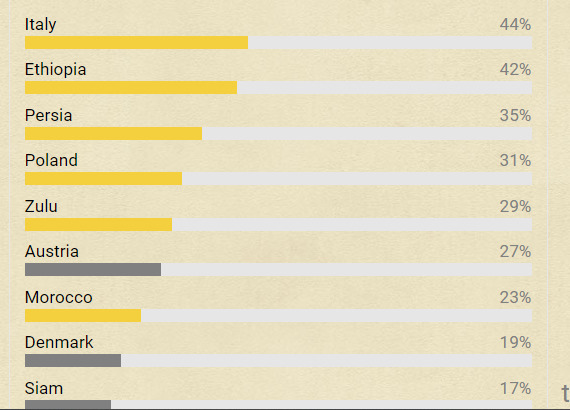 And ottoman is easy: expand the game to asia and europe with civs that fit the game

That has not happened either. When AOE3 was announced everything was in the Americas, and Ottomans should not be introduced to the game before TAD

If the first one can be easily undermined and people already accept that (no they don’t. There are still purists insisting the game should be set in anywhere but Europe), why should the second one be a strict rule?

Nah man. The Sioux were prevalent beginning the 1600s. The War Club unit description even refers to it.

Before their major confrontation with the US, they are mainly involved in fur trading and maybe a few tribal conflicts.

The greatest powers among the American revolutions were the United States and Brazil. Later, the more popular ones are Gran Colombia, Mexico, Peru and Argentina. Canada was dependent on Great Britain. There are still Chile and Haiti - I do not count non-American rev civs. There are 9 of them in total. In the classic AoE 3 there were 8 of them (excluding Canada). They had leaders and flags. Now the question remains: Which rev civs could come alongside the US? After all, making only one of these civs would be unfair to the rest - apart from the fact that it makes no sense anyway and kills the sense of the mechanics of the revolution.

Perhaps the USA, Brazil, Mexico, and Gran Colombia / or Argentina would be part of this DLC / or FLC. And their place would be Cuba, Uruguay, Bolivia and Paraguay, and maybe even Texas, California, Quebec and CSA?

Of course, this is only speculation, but I think that if you add the USA, it should be added a few equally big rev civs and replace the old rev civ with new ones.

I think Brazil is surely on the list if we’re going down that track.

Disclaimer: I actually think that should happen after we get Africans and Europeans.

I agree with you that the game should not only has colonial nations, I think there is room to expand that concept to the timeframe itself around the world rather than just colonialism. I guess the question is how much do we all as a community want to expand that concept. I’d be happy with european maps, campaigns, minor cities, the same with asia and africa, and yes, you have to bend somethings to make it work as it has been working now. I just think that adding US not only bends, but breaks the game. Themes, narratives and such are very ethereal concepts, to be fair, so we can discuss what are the themes of the game to infinitum: we all have a “sense” of what the game is, but it becomes blurry on the edges and that’s where we are now, on one of the edges.

But let me tell you something: If we had a more represented world, a bit more fleshed out, I wouldn’t mind having a second look to rev nations and change the necessary things. I just feel that having it in the game before other civs that don’t conflict as much with what is already in the game has sit poorly with many people as the first sight of content in more than 10 years.

I was disappointed with these revolutions. Even models for the units did not make. And Home City, no matter if Budapest or Rio de Janeiro or Cairo - they all look the same …

we all have a “sense” of what the game is, but it becomes blurry on the edges and that’s where we are now, on one of the edges.

I would say it’s blurry from the very beginning as they started with Ottomans.
The game or the series has always been very inconsistent especially when it comes to “time frames” ,etc. For example, the Act III campaign which starts in ~1820s, the US still start with the “colonial age” which looks like ~17th century.
The point I’m making is, “development level” and “progression in time” have been intertwined by design since AOE1. A small, backward US settlement in 1870s is still in the “Exploration Age” of the game, just like some late medieval battles in AOE2 beginning with “Feudal Age” or late classical ones in AOE1 beginning with “Tool Age”.
So US existing in the “Exploration Age” is imo a trivial problem.

For the rest, though, I mostly agree with what you said.

Yes but at least they existed. And they did interact, not infrequently, with the French and Iroquois.

But you think Austrians are unnecessary, but over 25% want to see them in the game

More people want them than Danes and even Siamese (I’d like to see both of these civs).
Besides, the gap between Zulu and Moroccans looks interesting.

Personally, I think that each one fits in this screenshot deserves to be in this game. All of them are interesting and relevant in the AoE 3 timeframe.

True. But that “Lakota” in the game has a flavor much later in the time frame.

BTW, what I do think is the most appreciated new content at present would be polishing of the natives. E.g. the middle eastern maps still have Indian/Asian natives which looks funny.

US is planned maybe because it’s quick and easy work, but I’d prefer that before US.
Larger expansions like a full one with African civs and maps might need more time.

See in https://steamdb.info/app/1581450/history/… it has renamed to Buffalo again. Perhaps an April’s fool.