I dont believe it, I want facts!!!

Aztec reworked. I can’t believe it…
Thank you devs <3

Will be a bug again??

Maybe one day the Swedish immigrants card will get added. Sigh.

Some much needed changes to USA early game.
But I think Virginia is once again a must have. I do think US deck should be 25 cards. Most of the age up cards are not equivalent their resource worth imo.

I really love it. And it is not looking OP. Can’t wait to test it

I honestly think Rhode Island is going to be very good this next patch. If you have 20 vills when you send the slater textile mills you get 600f instantly and get the cheaper vills/boats. I think it solves the issue of not having an age 1 schooners card since you get the wood back for the boats you make but it seems like it could be pretty strong for an age 2 card.

I think some noteworthy changes other than new maps empire wars and US/Aztec changes are
*you can have control groups of 60 units
*Griots are now infantry so they can get killed by falconets
*Grenadiers have 50% rr and 0.5 multi vs calv/vills so maybe they’re viable
*age 2 huaracas have 12 range
*age 2 kallanka card costs 500 wood
*you can stop cannons limbering
*Halbs are 4.25 speed now which should make for some interesting Dutch Logi strats
*Salons trickling gold seems like a buff to merc strats. 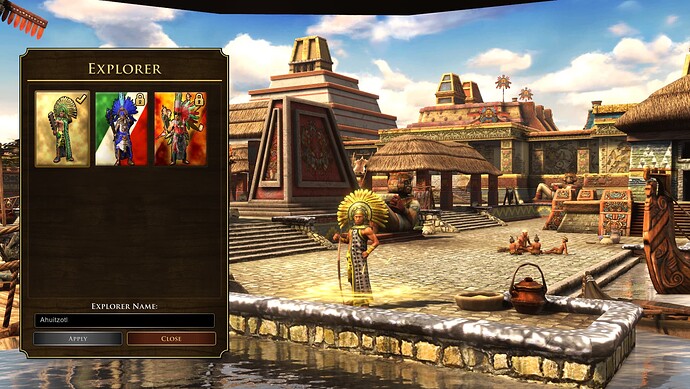 the kallanka nerf seems too much, lowering the huaracas range was more than sufficient, making the card cost 500w means it’ll just never be used now.

It’s nice they increased the deck though, and the new virginia 2 card shipment looks good, with 3 extra cards you’ll still only need 1 for a factory if you age with new hampshire so that’s 2 extra slots.

True, but you still have to autolock new Hampshire in age3 and IMO this is bad to have a deck choice force you into a specific age3 age up.

It’s still a must have age up imo, I thought they were going to rework all the age ups because none of the others compares to an age 3 factory.
I can’t remember last time I didn’t choose new hampshire and I doubt that’ll change because all the other age 3 choices still suck. So for me at least I’m always locked into that specific age up anyway.

Yeah it is a must age up because USA economy is very slow in the early game, you need that factory to even stand a chance.
Maybe one of the others should get a 7 villager shipment or something.

This is where a Swedish immigrants card could come in handy- a few torps in the early game? yes please.

The massive buffs to cowboy strats… the cheese is strong…

For people like me who first saw this on mobile, a little ctrl-c ctrl-v:

With today’s launch of the Public Update Preview, we’re making the first build available for an early hands look at the work being done for the upcoming, smaller, November Update. As part of this process, we’ll be updating the build often with additional fixes, so this is the thread to watch – this is where we’ll provide any notes or changes that are worth paying attention to, and we’ll update that information as newer builds come online. Keep an eye on this thread for more information throughout the Public Update Preview.

Below is a list of preliminary fixes we are prepping for this release. Please note that not all potential fixes/items are guaranteed to be in the final update, as we are still actively testing everything and may need to adjust or remove items if they are not ready. Additionally, this is not a holistic list, and some additional items may end up in our final release.

Empire Wars for Age of Empires III: Definitive Edition is an additional game mode to accompany Supremacy, Treaty and Deathmatch.

Like in Age of Empires II: Definitive Edition, Empire Wars puts players into the action right away with additional resources and a bolstered economy. However, instead of a pre-built town, players use a steady trickle of free Homecity Construction Wagons to grow their town with buildings they choose – making what you build and when a valuable decision!

UNITS AND BUILDINGS:
Heroes: are now also immune to RNG abilities (such as Stomp and Divine Strike), like they are to other abilities
Warships: Are now counted as gatherers on the UI when they are gathering

Aztecs
CIVILISATION
Gift Ceremony: Is now the default option at the Community Plaza (affects all civilizations that it is accessible to)

When I played the campaign “the war chiefs” I was a little disappointed that the Aztecs did not have a campaign. Its metropolis is one of the ones that I liked the most and I would very much like to be able to personalize it.