I’ve had a weird problem with the US. I unlocked it through the challenges, but I can’t play it offline. Buying the African civs let me play with them offline, but unlocking the US only lets me play them if I’m connected to the internet, which is sad since they’re my favorites.

Are the gathering animations still broken for Settler Wagons? If they are, I hope they get fixed next.

Hi, I cannot reproduce this issue in 1v1, team games, or FFA. Could you provide anymore details regarding this? Approximately how often are you seeing this? Do you have any screenshots?

Any extra info you can provide could be useful, thanks.

The ‘unknown’ map has a very poor treasure and hunting distribution since before DE.

Since you are attentive to this forum I would like to report a visual error. The trees always move at the same pace and at the same time when they pretend to be moved by the wind. I’m pretty sure that before DE it wasn’t like that. Stand more like a dance than a natural situation.

The nizam cannot build buildings like the Janissaries
vividlyplain October 9, 2021, 1:15am #107

The ‘unknown’ map has a very poor treasure and hunting distribution since before DE.

I encourage you to check out the current iteration of Unknown rather than comment on the legacy version.

The trees always move at the same pace and at the same time when they pretend to be moved by the wind. I’m pretty sure that before DE it wasn’t like that. Stand more like a dance than a natural situation.

Is this unique to unkown, or an issue you’re seeing with trees? This is something that would probably need it’s own thread to get the attention of a QA person to log.

I’ve been playing that map a bit in DE and it still has a bad layout.

As for the trees, it is something general. I can’t explain it well, but they move in sync.
I had already mentioned it around here:

I would like to report a visual error. And it is that the trees that emulate moving by the wind do so at the same rate and at the same time. It’s a bit uncomfortable to see why it doesn’t make sense.

it’s 1v1 skirmish and it seems to have a 100% occurrence rate for me and only appears in the “the Unknown” map.
I am also playing Inca. 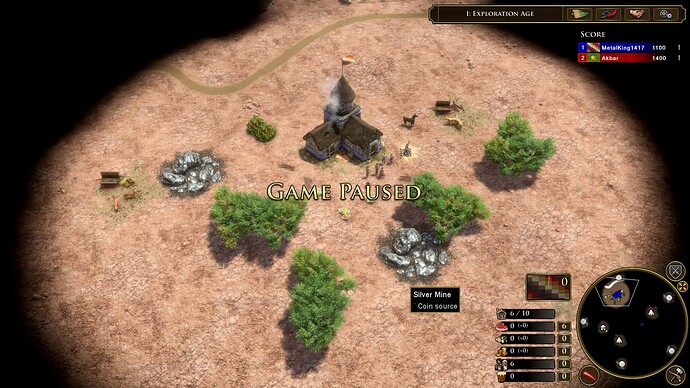 Is it only happening with the circular trade route spawn?

No. it happens with all spawns.

Strange. I still can’t reproduce this on any spawn. I’ll keep an eye out for this though.

Devs: please don’t forget an option to remove the fog for ludicrous zoom so we can play fully zoomed out without a foggy display!

REMOVE CATTLE LIMIT FOR NO AFRICAN CIVS!!! It has no sense

ehm, you know that Hausa can instantly reproduce cows for free when they use them right?

@Jonasnee8581 What part of no african civs you havent understood??

i just didnt see the no?

still no, terrible idea, like thank you for giving British a 4000 score boom option but pleas no.

@Jonasnee8581 U know that cows cost food right?? Trading cows its a must on Deccan, Mongolia…that kind of maps. Nobody said anything about it in 15 years. This change has no sense for non african civs

The problem is that when India played with allies in the treaty mode, the ally gave him cows and gained experience in a huge way. It seems good to me that the alaidos cannot give away their cows, but I don’t think it’s good that they set a limit.

and you know that british settlers can gather them at over 8 food/sec right?

like look up british cow booming, and then ask yourself what effect giving them unlimited cows would have.

atm you can sustain like 7 villagers on 20 cows, which basically 3-4 improves their yields over fully upgraded mills from age 1. if i could make as many as i wanted then nothing would stop me from getting a 150 and just put 50 villagers on them, that should even with food cost of cows in mind give about 300 food/second, and that is just half my eco.

Britain already have one of the strongest ecos in the game because of cows, just removing a limit would break the faction immediately.