For those who do not know, the October pre update has already come out with many changes for Incas, below the changes!

Graphics
Majority of horse drawn units now work as two units and turn properly rather than being treated as one large unit.
The Livestock Pen that is obtained by the Japanese via the Dutch Consulate now uses the Dutch Livestock Pen graphics.
Updated the Skirmisher icon to more accurately represent the in-game unit.
Fixed a visual glitch where balloons would fall below the water surface on certain maps.
New animations for people in the Indian Home City Market customization.
Fixed an issue where units in the Japanese Home City could sometimes walk into the water.
Fixed a rare issue where some units would flicker when using the “Friend/Foe Outlines” accessibility setting.

UI
Fixed various map descriptions which did not list the correct Outlaws & Natives.
Fixed a rare issue where a treasure on the map “Plymouth” would indicate the treasure reveals other treasures on the map, but instead, it grants a Pilgrim.
The tooltip for the bonus Influence/XP sources (Town Center, Trading Post and Palace icons) in the unit stat panel for the University now shows the contribution that each source makes to the rate.
Dutch: Infinite “Falconet” Home City Cards now have a purple border.
Ethiopians: After sending the “Coffee Berries” card, Villagers are now counted as Coin gatherers instead of Food gatherers in the UI.
Berber Camel Rider’s tooltip now indicates it’s a ‘cavalry’ unit, instead of a ‘cavlary’ unit
Dunes map description has been updated to accurately reflect the map’s layout.
Hussar’s history section now correctly indicates that the unit is heavy cavalry instead of light cavalry.
Updated the HUD to display challenge tracking in-game.
Imperial Sharpshooters are now using their correct name (instead of Veteran Sharpshooters) when starting a game in the post-Industrial/Imperial Age.
Fixed incorrect order for wood upgrades in the Inca techtree.
Fixed height scaling issue for Civ Flag tooltips in SP and MP Lobbies.
Show game modes and sizes being searched for during ranked game search.
The Narrator now reads out important information on the Game Summary and Player Summary screens.
Fixed some issues where the Narrator wouldn’t read out resource symbols in some in-game UI (e.g. Chat output & Livestock Market).
Accessibiliy: Added missing keyboard navigation feedback for Publishing and Reporting windows in Mods menu.
Accessibiliy: Added missing keyboard focus feedback in deck builder.
Fixed text truncating in Russian in the Diplomacy menu.
Fixed text truncating in the challenges complete menu.
Fixed text truncating in the objectives menu in the HUD for Primary and Secondary objectives.

Multiplayer
Multiplayer save games can now be loaded if they use custom maps.

GAMEPLAY
General
Military units can now be given a command to Patrol along a sequence (or around a loop) of waypoints.

Campaign
Art of War
Art of War - Artillery: Players will no longer lose the mission when shelling the final buildings with Mortars.

UNITS & BUILDINGS
Llamas: Added two new shades for Llamas: Black & white!
Sudanese Dervish: Now inflicts 0.5x damage to Villagers (down from 1x)
Granadero: Is now also tagged as Heavy Cavalry
Fortifications: Blockhouses and Castles can now properly “see stealth”
Elephants & Giraffes: Fixed a pathing issue caused by these units taking up more space than necessary
Church: Corrected the XP trickle of the Church obtained via Dutch relations at the Consulate to 0.7 xp/s (from 0.6)
Spahi: Idle Spahi now automatically heal for all civilizations (not just the Ottomans)
Dock: Is now easier to place foundations on jagged coastlines
Wokou Junk: Ranged attack now inflicts 1.5x to buildings (down from 3x) and 0.66x to docks (for 1x total)
Stealth: All Military units can now discover “stealthed” buildings (e.g., Inca Strongholds) when within 2 range of them; no changes have been made to the current behavior of units that can “see stealth”
Quechua Settlements: We have re-activated the legacy minor Inca native settlements which are now present as Quechua on more maps than before (see maps section for details) – the available upgrades at the Settlement are flavored versions of the ones previously available at the Inca Settlement.

INDIANS
UNITS AND BUILDINGS:
House: Cost increased to 80w (from 70)

INCA
EARLY ECONOMY:
Starting resources and units: Adjusted as follows
Food: 300 (down from 400)
Wood: 400 (up from 300)
Coin: 100 (up from 0)
Livestock: 3 Llamas (up from 1)
Villagers: 6 (up from 5)
[NEW] Added 3 Villager Card (I)
[NEW] Added 5 Villager Card (II)
Kancha House: changed as follows
Wood cost increased to 180 (from 135); bounties and build time adjusted accordingly
Now supports 16 pop (up from 12)
Hitpoints improved to 2000 (from 1500)
Build limit reduced to 12 (from 13)
Default Food trickle: No change
Chicha Brewing card: Improves food trickle by +60% (up from 50)
Queen’s Festival (Kancha Big Button): changed as follows
Moved to the Commerce Age
Now grants 5 villagers (up from 4)
Cost increased to 300 of each resource (from 180)
Comment: These changes aim to move the Big Button away from opening build orders and give it the role of a ‘greedy’ early boom option or economic follow-up (it is more expensive than an Age 2 shipment by design)
Community Plaza Moon Ceremony: changed as follows
Wood trickle scaling improved to approximately 0.25w/s per tasked villager (Llamas and Priestess count as 0.25 and 1.5 villagers respectively
Moved to the Commerce Age (from Industrial)

The Elder (Age 1 → Age 2): Now grants Lumber Ceremony (250) and Forest People Ceremony (385) – We will be playing close attention to this politician and will make further adjustments as necessary

REVOLUTIONS
General
Fixed an issue where the Revolution deck would not be activated when a player has the Deck selection menu open while revolting.

Haiti
French are no longer limited to 80 Villagers after revolting as Haiti.

AI
General
AI players now spend less time moving their Villagers between resources, improving Villager efficiency.
AI players will now build less additional Mills/Farms/Estates if the existing ones are not fully occupied.
AI players can now use Silver Prospector Wagons, granted by the “Team Alaska Purchase” card.
After revolting, the AI will no longer attempt to construct buildings with transformed Villagers if they don’t have the ability to do so.
Hausa AI players will now build Universities on lower difficulty levels.
Hausa AI players will now attempt to build Universities closer to buildings that provide a bonus trickle for them.

These seem like genuinely interesting changes. But I’m so disappointed not to see changes for the USA. I loved playing the civ when it came out, but I haven’t wanted to play them since we’ve been told that a number of changes are coming two patches ago.

Looks great. The devs are concentrating on one civ at a time which I think is a wise move. Don’t worry Aztec players your day will come

So we have 3 more native civs left and according to a few patches ago the USA.

Love the changes to the Inca. Altering the civ a little while keeping their identity. Loved playing them so I can’t wait to test the new Inca out.

They really are listening.

Massive inca nerf for treaty . Massive , don’t think now if they will be top tier civ .

I love that my favorite game is still being supported.

Inca Chimu runners are finally nerfed
I guess if 'mnot mistaken, @Khorix9572 made a post about Incas OPness long time ago and probably was taken into consideration.
Not sure if Dutch needed a nerf.
Rest of changes look quite good

It was necessary, it is the most popular civilization in the game for a reason 21

I don’t know if it’s a bug, but sending 3 villagers of the first age gives you a chasqui, this is moderately OP.

all inca shipments from age 1 now grant a free chasqui

Im disagree with some inca changes:
-More speed for Chimus WITHOUT cards, while Coyotes get max 6.88 speed.
-Kanchas collecting wood + Firepit: Really it was needed?? They had infinite crates and infinite trade card.
-3 llamas at the beggining?? Why? I mean, starting with plaza was the last Aztec feature remaining.
-1 more vill for big button: It has sense cause it was moved to age2, but they gived them 2 new villagers card. They have to spend a shimpent but they havent to spend resources doing the button in that early game.
-Wamani: Why??? They changed the aztec warchief’s HC card to train from Nobles’ Hut, and now incas can do it better sending 2 FREE TRAVOIS and enabling the 3 units.
-That changes to tribal council??

Also all they changed in India was a cost reduction of houses?? REALLLLLLY???
Please say me that there are more changes.

ok definetly im very happy, can’t wait to watch inca and i think inca will be more difficult to play at early game but still strong imo, which is good for me, some good shipment age 3 i like that and thanks no more 5 TC !!!, well yeah good

This is a preview, not all that they are going to add is there, also, not all changes are final. They could have more changes before the patch goes live, and not implement some changes that are already here. That’s why they release the preview, so we can test it and give feedback

I am very excited to see that they are slowly implementing minor Natives reworks!

Really glad to see they’re listening to the community. For example the underrepresentation of South Americas has been brought up several times. It takes some time to implement things.

Lets keep working !. I am glad that the forums and requests are not in vain. Thanks to the developers for giving this game the treatment it deserves!

New customization for the Inca explorer too! 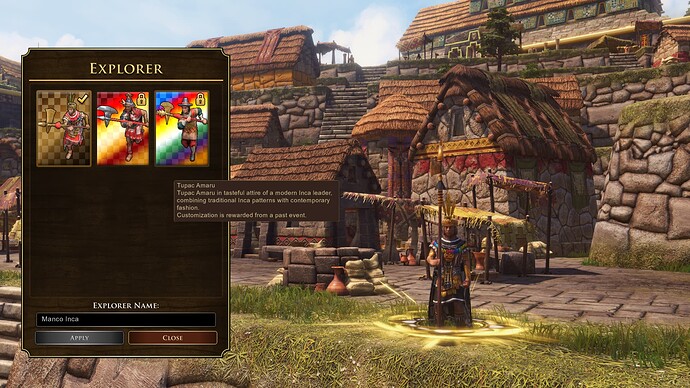 “Customization is rewarded from a past event”
It seems we’re getting another event in the next patch! I wonder if it will be just for the Inca or there will be challenges and skins for other civs as well.

Nice changes with a few exceptions !

October 15 is the anniversary for AoEIIIDE. Think we’re getting back to back events.

Dude u often put some exergerated post . Inca is nerfed to trash for treaty