I’m not sure if that can be classified as a bug, but I’m doing it because it’s very annoying to experience it, here we go.

In singleplayer standard games you can opt to give your lobby seat to an AI, this way you share the player color with the AI, equally to when you choose the same color as other players on a multiplayer game, and the AI take the wheel. This way you can watch a match composed only by AI players.

After a few minutes into the game the AI you’re sharing a seat with starts spamming the chat message “Trush defense” on the chat indefinitely. 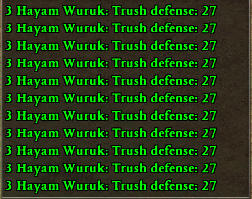 In all the games I played it happened at some point before the feudal age. Sometimes the AI start spamming it at 1:30 minute mark, sometimes it starts at minute 6. All the tests I did were on Random Map game mode, under the recommended settings. The games always featured 8 AI players, with no team assignment and full random civs. The maps I tested this on were Golden Pit, Ravines and Coastal, both at tiny and medium map size. I saw the occurrence with Standard and Extreme AI difficulties.

I’ve tried to spot the cause and funnel down this happening, but I couldn’t. It seems to start completely at random, and the AI was never even attacked when spamming it, nor reacted as if were defending — they just acted normally, but spamming the message on the chat nonstop.

is there a spectator slot option in single player?

Not in the same sense of spectating a multiplayer game. What’s possible is described above in the second paragraph.

This is actually debug chat that the AI just chats to itself (which is visible if you put an AI into your own player slot) and can safely be ignored. Thank you for describing the settings you used as well, in this case the chat likely happened because enemy villagers were close to the AIs’ town (especially likely with 8 players on a tiny-medium map size).

Oh okay, thanks for clarifying!

But anyway, is possible that we have a better way to spectate the AI then? Because on the said settings these messages come indefinitely and you can’t mute them