On what makes sense for a possible European DLC

so yeah, i dont think a german split is a reasonable option, at least not atm,

Im not urging the dev do it now.
Actually I hope more map and semi-civ of Asia, even fix the politically and historical incorrectness of the current 3 Asian civs.
That is what they should do before introducing more Europeans.

About an european dlc, I’d like to see first of all Italy, to “complete” Ensemble Studios vision, and Denmark. I also believe that having the Ottomans would make the case for Poland - Lithuania to be in the game.

Any particular map ideas you can think of that are missing for South America? Maps shouldn’t be added just for the sake of reaching a number. Significant places in North America such as Newfoundland aren’t covered at all.

Where is Denmark? they had lots of colonies

Why are Austria and Prussia the same civ, they fought each other all the time?
I know they are separate in some mods but…ES kind of dropped the ball back in the early 00s.

Why are the British still using welsh longbows instead of baker rifles?

personally i think the longbows are fine, sure they arent the most historically accurate unit but they are an interesting and very unique unit compared to what other factions have, they give options that normal skirmishers simply dont.

Check the maps for North America: 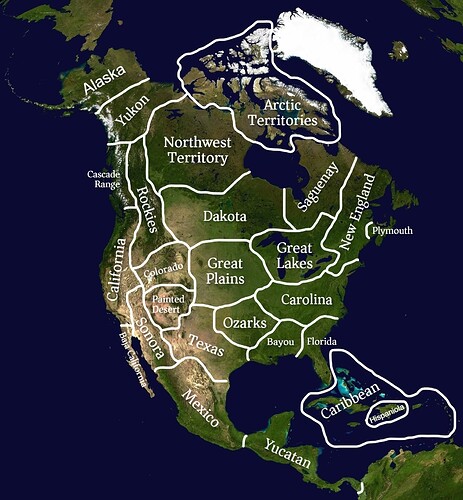 And then compare it with the maps of South America: 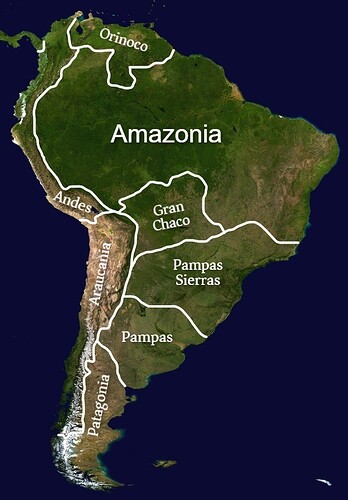 You can even see that Amazonia could fit a least 2 or 3 more maps: the map as it is right now, calling it deep amazon; the amazon delta with many river mouths; a black forest map in the western zone and a mountainous jungle map in the space north of Pampas Sierra. Andes, Araucania and Pampas Sierra too could be divided, just as north america has Alaska and Yukon, Rockies and Cascada Range, California and Baja California, Great Plains and Ozarks, New England and Plymouth. Is not a about reaching a number, is about not having maps that basically represent whole countries which are amongst the most geographically diverse on the planet. Only in what they call “andes” you can find up to 9 distinct biomes, i’m sure is the same for the other ones.

But this is a thread about european dlc, which I also encourage. I mean, compared to SA 8 maps, Europe 0 maps seems worst.

This completely exposes the lack of South American maps: Brazil, a country that is of similar size and with just as diverse in terms of biomes to the mainland US, has 3 maps, while the USA has 13…

While I’d love to see a European DLC containing Italians and Danes I’m curious how they’d be designed because if they make them as unique as USA and African civs it would further alienate the other European civs but if they keep the same design concepts the DLC might not be intriguing enough to players.

Unless the European DLC adds something new to existing European civs I’m dubious we’ll get more Euro civs, unfortunately. and I’m postive the devs won’t want to change the existing euro civs too much…

the US launched with 9 unique units, a very unique age up, unique building (early capitol that lets you make construction wagons), unique upgrade to mercs and a lot of very unique HC cards.

id expect future European factions to have more like 3-5 unique units, 1 unique mechanic and then a unique economy and some unique HC like other europeans

ok,the Danes fought in many wars in Europe between the sixteenth and nineteenth century,but that would also apply to Poland-Lithuania…beyond the colonies here and there,which would make the Danes have a higher preference than the Poles or the Italians to have to add them if or if to the game?..

i haven’t said they have a higher priority (tho 1 could argue being a colonial power is an advantage here) but the argumentation that one could use for why Poland or Italy shouldn’t be in the game (in the case of Poland that they seized to exist) doesn’t apply to Denmark.

And one more thing:the Poles partly developed modern parliamentarianism,with the Złota Wolność (Golden Freedom),with its own bill of rights,freedom of veto,freedom of religion,all of them in 1573.It is no coincidence that in 1791,the Commonwealth of Poland-Lithuania adopted the second oldest codified national constitution of the Modern Age (if we consider the Articles of Confederation and the Constitution of the United States of 1787 the first of them).

If I think the same,in addition the Mapuches were very powerful fighting against the Spanish crown first and then against Chile and Argentina…would be played similar to the Lakotas…

Longbows remained in use until around the 16th century, when advances in firearms made gunpowder weapons a significant factor in warfare and such units as arquebusiers and grenadiers began appearing. Despite this, the English Crown made numerous efforts to continue to promote archery practice by banning other sports and fining people for not possessing bows.[64] Indeed, just before the English Civil War, a pamphlet by William Neade entitled The Double-Armed Man advocated that soldiers be trained in both the longbow and pike; although this advice was disregarded by other writers of the day, who accepted that firearms had supplanted the role of archery.[65]

At the Battle of Flodden in 1513, wind and rain may have contributed to the ineffectiveness of the English archers against the Scottish nobles in full armour who formed the front rank of their advance, but when the opportunity arose to shoot at less well protected foot soldiers, the result was devastating. Despite his armour, King James IV of Scotland received several arrow wounds in the fighting, one of which may have caused his death. Flodden was the last major British battle in which the longbow played a significant part, even if not a decisive one.[66] Longbows remained the main weapon of the trained bands, the home-defence militia of the Tudor period, until they were disbanded by Queen Elizabeth I in 1598.[67] The last recorded use of bows in an English battle may have been a skirmish at Bridgnorth, in October 1642, during the Civil War, when an impromptu town militia, armed with bows, proved effective against un-armoured musketeers.[68] Longbowmen remained a feature of the Royalist Army, but were not used by the Roundheads.

Longbows have been in continuous production and use for sport and for hunting to the present day, but since 1642 they have been a minority interest, and very few have had the high draw weights of the medieval weapons. Other differences include the use of a stiffened non-bending centre section, rather than a continuous bend.

Serious military interest in the longbow faded after the seventeenth century but occasionally schemes to resurrect its military use were proposed. Benjamin Franklin was a proponent in the 1770s; the Honourable Artillery Company had an archer company between 1784 and 1794, and a man named Richard Mason wrote a book proposing the arming of militia with pike and longbow in 1798.[69] Donald Featherstone also records a Lt. Col. Richard Lee of 44th Foot advocated the military use of the longbow in 1792.

Yes, the Amazon is not only the river and some more maps could be drawn. Apart from the Tupi there are many more natives.

Any particular map ideas you can think of that are missing for South America?

The Andes is another map that is very simplified.
In the northern part of the Andes there were the Nutabes, the Taironas, the Quimbayas, etc. And the ecosystems are a little different from the one in the game, (for example there are no llamas or guanacos).

And also because it brings certain reminicences of aoe 2…

It is enough to add Poles as an option for the revolution for the Russians civ. Just give them a Winged Hussar as their UU. Oprichnik would get reskined and rename on Szlachcic. Cavalry Archer renamed for Poles to Lisowczyk. The Cossack would be reskined to suit the Zaporozhian Cossacks - bare chest. They would also get the Uhlan which is the UU for the Germans civ. HC Cards to be decided. Settlers turn into Chłop. They receive a new model of the unit and scythes (in the case of defense / combat, the scythe is directed upwards - like the Racławice Scythes).

We would easily get Poles who would have Winged Hussars (a completely new unit), Uhlan from Germans civ, and renamed and reskined Russian units.

Yes,but aoe 3 had already left aside the colonial theme in The Asian Dynasties and a European dlc focused on Europe would have little to do with this theme…it would focus on European conflicts (Italian wars (Italy),30 years’ war,the northern wars (Poland-Lithuania) and the Napoleonic wars);although then I do not rule out adding the Danes as well,but obviously trying to differentiate them from the Swedes,the Germans and the Russians…

Yes,but as you would differentiate them at a general level for those who are not knowledgeable about the Andean region?..in the maps located to the north you put the Incas (Andes) and in the area of the Brasilia massif (Colombia,Venezuela and the Guianas) you put the Caribs and the Tupi (in the area would be the Muisca Confederation,which could be a civilization that would be played as the Haudenosaunee) and then Amazonas you separate it into 3 maps,and at least leave South America with 10-11 maps.

both of which Denmark was a prominent member off.

and the Napoleonic wars

were Denmark was Napoleons main ally, rather than some propped up state like the rest.

but obviously trying to differentiate them from the Swedes,the Germans and the Russians…

i dont see how they would be similar to those, IMO they would look a lot more like Portuguese with good ranged, but with some other aspects to boot. unlike russia they have good infantry, unlike Germans they have musk and good melee cav and unlike sweden they have skirmihers, and unlike ports they have grenadiers.