According to the website and aoestats, Ports have consistently the worst winrate in ranked 1v1 RM and even outside 1v1 RM they rank consistently at the bottom.

Organ guns are basically tanky HCs that dont get countered by skirms. They do 16/20 damage and 5 secondary projectiles doing 2 damage. Its extremely inaccurate with 50% accuracy and 0.75 dispersion and 1 minimum range. To put this into perspective, the Hussite wagon deals 17/20 damage with 3 secondary projectiles doing 2 damage with 90% accuracy. Arambai are known to be inaccurate and have 0.5 dispersion and still do full damage on missed darts that hit.

Contrary to the tooltip that states organ guns are good vs groups of enemy units, they are not. At most, they might do 30 damage in one shot to one unit. In practice, you usually do less damage than that since not all secondary projectiles may hit and the primary shot can miss. Missed projectiles only do half damage and projectiles can only damage one unit at a time.

My proposal to buff organ guns is to give them 0.5 AoE on their projectiles. 0.5 is the AoE on BBCs. This allows missed projectiles to do full damage if they hit their target and do a little AoE damage if units are tightly clumped up and stacked on top of each other. This would actually make them do what the tooltip says and be effective vs tightly bunched up infantry/archers.

Before you commit why don’t you do a few tests with organ guns in this scenario editor? Let’s see a post-imperial with 20 organs and see how effective they are? Or even an extreme case 50 of them. I imagine the death blast would nearly kill anything.

I’ve done this with the advanced genie editor, with my proposed buff a group of 20 post-imp elite port organ guns kill a group of 60 champs around 32 seconds, without the buff they kill them within 41 seconds.

From my limited experiences with Portuguese.
I mostly play 3v3 a 4v4 and I rarely play them for their organ guns. Except Nomad. And Organguns shread on nomad!
Portuguese need a different buff. They underperformed in feudal and early Castle.

First let me correct some of your statements

But the stats are a bit misleading, the hussite wagon fires its bullets not all at one’s which makes them fires slightly slower than organ. The hussite main bullet is a big one that migur have a different projectile speed.

Organs guns have +1 more max range but instead of +1 minimum range and organ guns aren’t as tanky as hussite. Hussite wagons have even the same base speed and with the UT are much faste. Organ guns arent that much cheaper than hussite either. Hussite also have slightly more bonus damages.

In total I fully agree with op and have asked for the same thing before. Some small 0.5 aoe would allow them to finally be true to their description to deal with massed units.

But, organ guns is a great unit in Castle and only becomes an absolute cost inefficient unit in imperial age. Therefor limiting the buff to just imperial elite should do.

Generally I am not sure if organ guns actually need a buff anymore, even thought the don’t perform well against clumped up units, atelast they are beefy hand cannons. But seeing how the hussite wagon is basically better in every way, it feels a bit unfair and differentiating two units with one more stat (aoe) would be fair to Portuguese players.

Some examples: 60 organ guns lose to 60 clump up rattan despite being much more expensive.

From my limited experiences with Portuguese.

And some people wanted this to be the terms for comparison for buffs/nerfs.
Just perfect.

Ok my turn, I played 30 matches with Portuguese, imho Organ Guns are plainly weak even massed. They are very clumsy and slow, they die horribly to mangonels/onagers (castle/imperial) and bombards, and even skirms (non elite Organs) and archers can shred them easily for much less gold/wood (Organs have only 4-6 pierce armor after all, not 7-10 like Hussite Wagons). I’d rather mass Cavaliers or arbalests with Portuguese (expecially with that gold discount). Heck I’d even prefer to use HCs now after the buffs.
They need to spread better the damage to fulfill their function. Instead of doing 20+2+2+2+2 They should do something like 8+5+5+5+5, with full damage on secondary bullets.
Yes, I’ve seen people win with castle drop into organ guns on arena, but big part of it was the castle drop on the forward gold/stone.

Yep, massed Arb/HC + halb is the Port comp while creeping up castle/BBT post-imp when feitorias become important. Organ guns are just mediocre compared to a heavy scorpion although I guess ports dont get heavy scorp. The thing is alot of other civs are much better doing archers + halb or siege than ports.

Yeah, let’s follow the Korean root and give the Portuguese all their Civ power in one Unique unit so they win if they get a castle up and lose if they die in feudal.
Worked out great 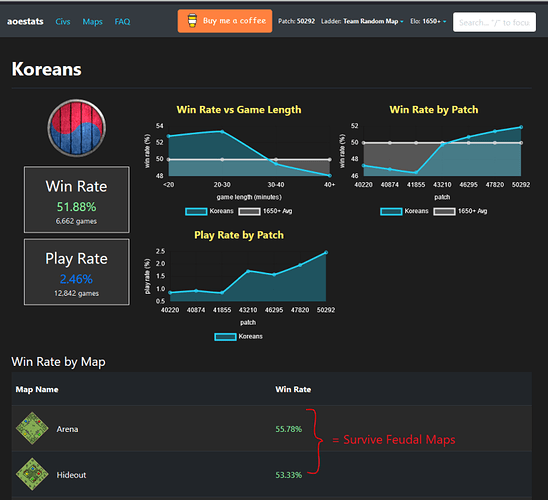 I can’t tell if this last post is sarcastic. Looking at your graphs, Koreans don’t look too bad.

The only one against buffing OG seems to be @DesAnderes, and even he admits

and I rarely play them for their organ guns

In other words: OG are trash.

Portuguese are a slightly weak civ with a weak UU, I can’t see anything wrong with buffing their UU.

Personally I’d like OG to be reworked to be a pop-efficient unit (somewhere between Onager and WE) but that would require large changes and I know it’s unlikely to happen.

the hussite wagon is basically better in every way

When I tried 2 castle hussite wagons against the AI, it seemed worse than 2 castle organ guns, so I just tested both against a house, and one organ gun took down a house in 4:01 vs 5:59 for a hussite wagon. So that’s one way organ guns are better. Range is another, 7 vs 6 is significant for attacking TCs.

I’d like to see organ guns need some time to set up and then fire with a quite high atk speed less powerful projectiles. This way they could be used as a tool to secure important map areas rather than being an all-in unit. I think this would open new strats with portuguese.

The gold bonus makes ports already quite “flexible”, so a UU specialised for an all-in seems a bit off there.

Double castle Organ Gun is actually possible, once War Wagon is nerfed then people will explore them and Hussite Wagons…

Yeah, let’s follow the Korean root and give the Portuguese all their Civ power in one Unique unit so they win if they get a castle up and lose if they die in feudal.
Worked out great

This was one of the most senseless changes from the balance team. Old Koreans (in voobly era) were more fun to play, and the feudal age aggression with the towers was more unique than spam 1 unit to win.

Infact vs equal resources of infantry units like Champion or UU infantry pretty much kill organ gun which is something they’re supposed to be good against. SInce you can only deal at max 28 damage per shot, this is similar to HC which does 27 vs infantry. The difference is HC is obviously much cheaper, accurate and faster.

Same goes for Incas Trush (which i never felt too OP, but rather community again cries cause they cant execute their BO when there are towers everywhere - Afterall in WK era, the trushes where the same but Towers didnt actually suck and we rarely saw Incas Trush)
They just whooshed it, losing the civ identity

Same goes for Incas Trush (which i never felt too OP, but rather community again cries cause they cant execute their BO when there are towers everywhere - Afterall in WK era, the trushes where the same but Towers didnt actually suck and we rarely saw Incas Trush)
They just whooshed it, losing the civ identity

Tower “Rushing” is the silliest of unrealistic concepts this game ever featured and thankfully the devs are addressing it and try their best to remove it.
Even from a point of view only considering gameplay it’s not more than a cheesy strategy.

Tower “Rushing” is the silliest of unrealistic concepts this game ever featured and thankfully the devs are addressing it and try their best to remove it.

It’s a goofy strategy game. Castle drops are just as, if not more silly. Its removal from the game actually really makes a bad effect on team games. It was a legit option to trush and make the game messy in case the civ matchups were kinda bad. I mean… now you can still do it with town centers, but it’s really despised.

No. The unit would suck then. They would have to have an insane amount of HP and armor to make them viable. Not to mention, much higher attack. You basically turn the unit into a lesser trebuchet that need to back up, and does far less damage.

Take something like oanger for example. Instant blast from stones. Now, the organ gun has to set up and will get killed by onager shots, without even getting a chance to fire back.

Trushes are clearly a nice part of the game, they add strategic complexity.
It’s only bad if civs are designed around that like incas were with their bonus that disabled common counter strats.

No. The unit would suck then. They would have to have an insane amount of HP and armor to make them viable. Not to mention, much higher attack.

Sure? more dps after a short time of delay with less overkill?
I think the unit would have a nice role, something uniquw.

I’m speakin about reducing rof to values like 1.2 or so with 10 / 12 damage per shot after like a 3 second time they have to stand ground.