DESCRIBE THE ISSUE IN DETAIL (below). LIMIT TO ONE BUG PER THREAD.
On Pachacuti campaign 4: The Falcon’s Nest
You send 8 villagers to the priests, then the priests become your units. There are dropped 2 relics, which you can’t get with the Priests, only with Monks.

What was SUPPOSED to happen if the bug you encountered were not present?
I don’t know if this is intended or not, but for what I read on FANDOM wiki you can get relics with both priests and monks. 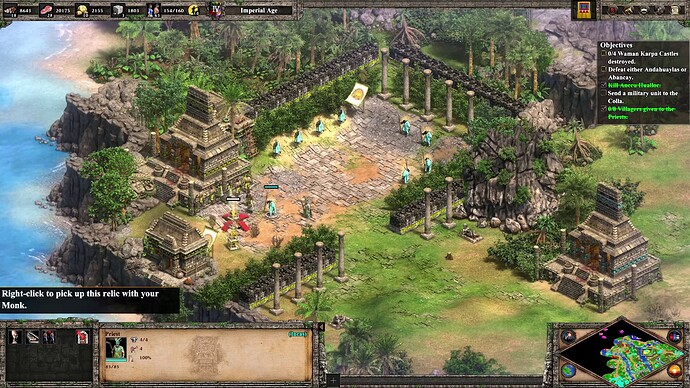 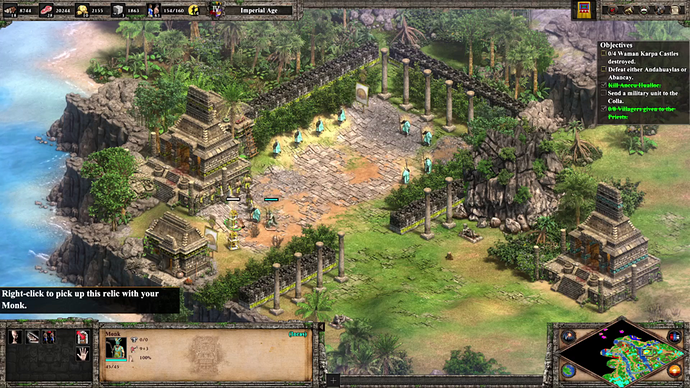 Savegame, recording and video in mp4:

I was also confused by this and made a thread a while ago. A dev responded and said it was intended behaviour. Seems dumb.

Game Version: Steam Issue: Two bugs in the Pachacuti campaign: I got the Pitched Battle achievement for not building any walls or gates in The Field of Blood, but I did do that. The hero priests in the fourth scenario can’t pick up relics or convert, making them useless. I didn’t notice if they could heal or not.

Priests can pick up relics, but these units aren’t actually Priests. They’re some other hero unit renamed. Hero monks can’t pick up relics for some reason even though they have a UI button for it. I made a thread for that too.

ISSUE EXPERIENCED The hero unit Chand Bardai found in the Indian campaign is similar to a Monk but can’t convert or pick up relics. Presumably that’s deliberate; however, when he’s selected, the mouse icon still shows up as a hand over a relic, which makes it seem like he should be able to pick it up but he just walks over to it and stands next to it. He also has a button…